Evaluation of a Roon launch with millions of music titles

2.65 million local tracks in the database.

Qobuz and Tidal are not logged in until the local music tracks are fully identified.

Adding to the database was done with Metadata Optimizer paused. 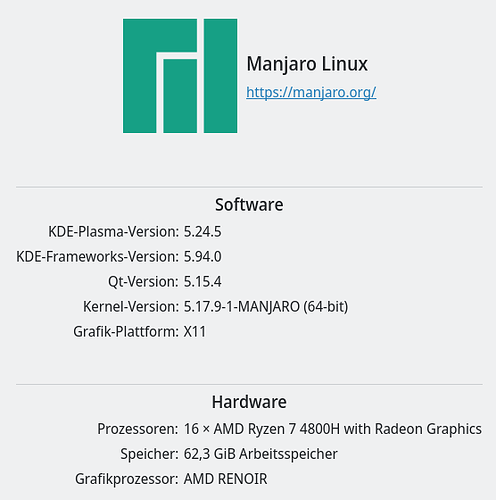 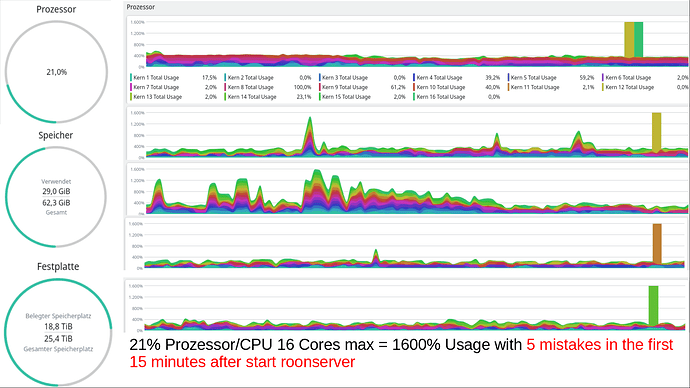 The few errors in the CPU workload only affect the short startup phase, according to my observations. There is no correlation to database size.

The logs (response time behavior) showed that it is better to separate adding and identifying. Here the development should make new considerations for all users.

The logs (freezing) show that the simultaneous use of the services is a performance brake. Qobuz and Tidal are therefore not yet logged in even in the identification phase and later in a third phase more closely examined what the intensive use of the services with my system does.

It seems to be programmed to have a new automatic login every hour that works reliably with less than 500 ms after the manual start.

On average 288 ms were needed. The longest time intervals were at 08:49:17 with 3313 ms and 11:27:12 with 3372 ms. Despite some outliers, I would describe this performance data as performant over the entire period under investigation.

GET internetradio.roonlabs shows 22 entries between 542 and 880 ms

Only one question: WHY?

Because I love my collection.

I have been maintaining this collection for decades.

Modern AI, a good community and perhaps the best desktops for music bring an invaluable added value also and especially to the approximately 90 million music titles at Qobuz and Tidal.

Streaming has the future, but this collection also plays without the Internet via various software solutions.

Digital rebuild: What goes how fast? 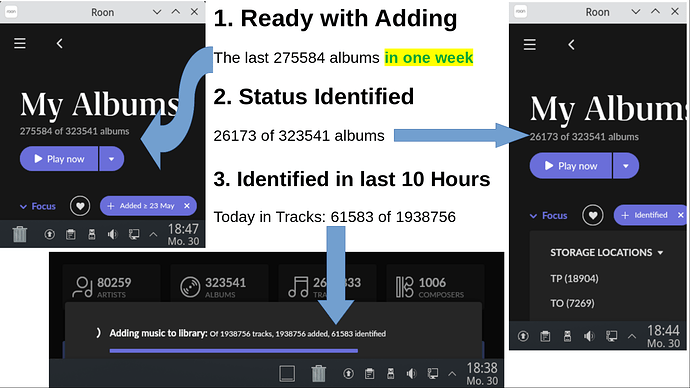 In the evening hours the performance is halved per hour about 3000 instead of 6000 music tracks.

Tbh Uwe you really are an edge case here with that level of tracks, any graphical app is going to be slow to pull and collate all that info. Foobar that you often go on about is hardly the same sort of app as Roon and in your case is likely more suitable as you need a lightweight tool for such a large collection or a much better pc than you currently using.

@Uwe_Albrecht , your constant posts to show your disgust with Roon are really getting old. Roon has been a solid product for me, with minor UI issues for many years (over 5 now). Why not find another product, and move on? Most of us enjoy uninterrupted streaming without any issues. Give it a rest?

Willing to bet you have not heard 1/10th of that music. lol.

you need a lightweight tool for such a large collection or a much better pc than you currently using.

I observe that Roon and other Internet uses are slower to respond in the evenings and weekends because more users share networks and resources. The best on-site rollout can fail if 8 billion people are then doing the same thing. Practicable solutions are therefore built and scaled in a modular fashion. It makes sense to have an alternative solution without the Internet. I’ve maintained that for decades! However, it makes even more sense to use the many connection points on the Internet in such a way that all previously unknown connection lines and usage scenarios are open.

I have experienced the slowness of iTunes, Apple Music, Qobuz, Tidal, Spotify & Co when I wanted to use the graphical interface with more than 50,000 tracks. Roon is more nimble with 2 to 3 million titles, Foobar2000 of course inferior from this point of view.

Foobar2000 is a 32bit application and not scalable upwards, because only 4 GB RAM meier 64 GB can be used. A hardware expansion is excluded as with Foobar2000, not with Roon. Roon could safely run with 100 million music titles on such supercomputers. 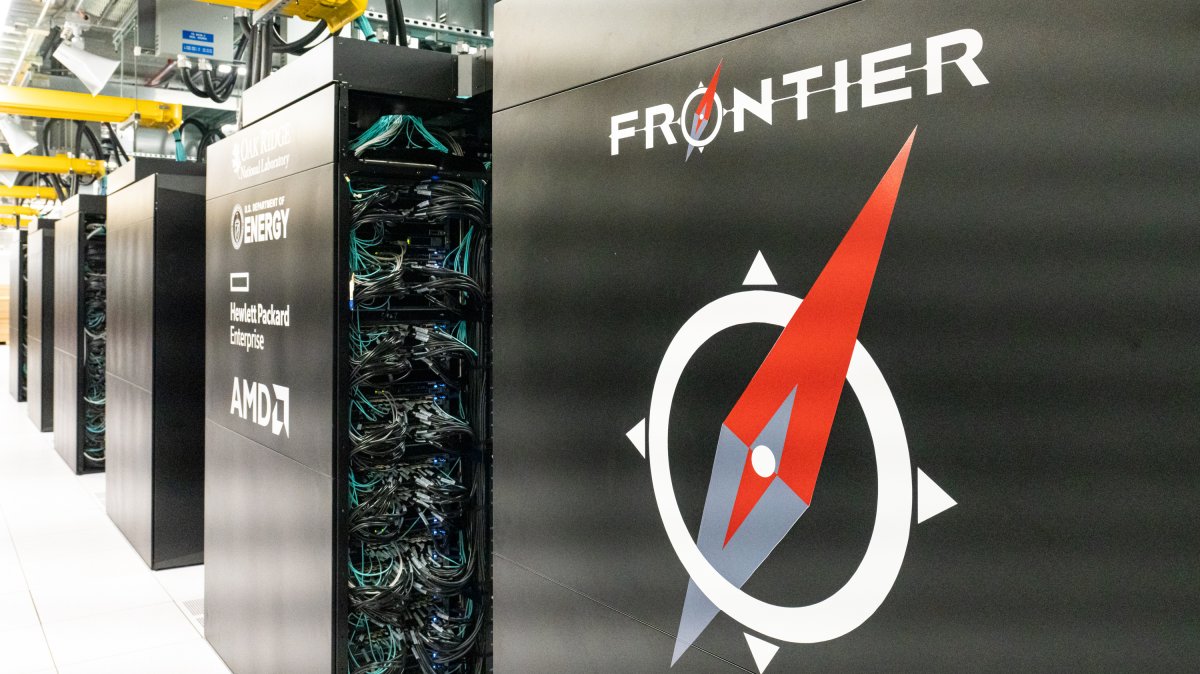 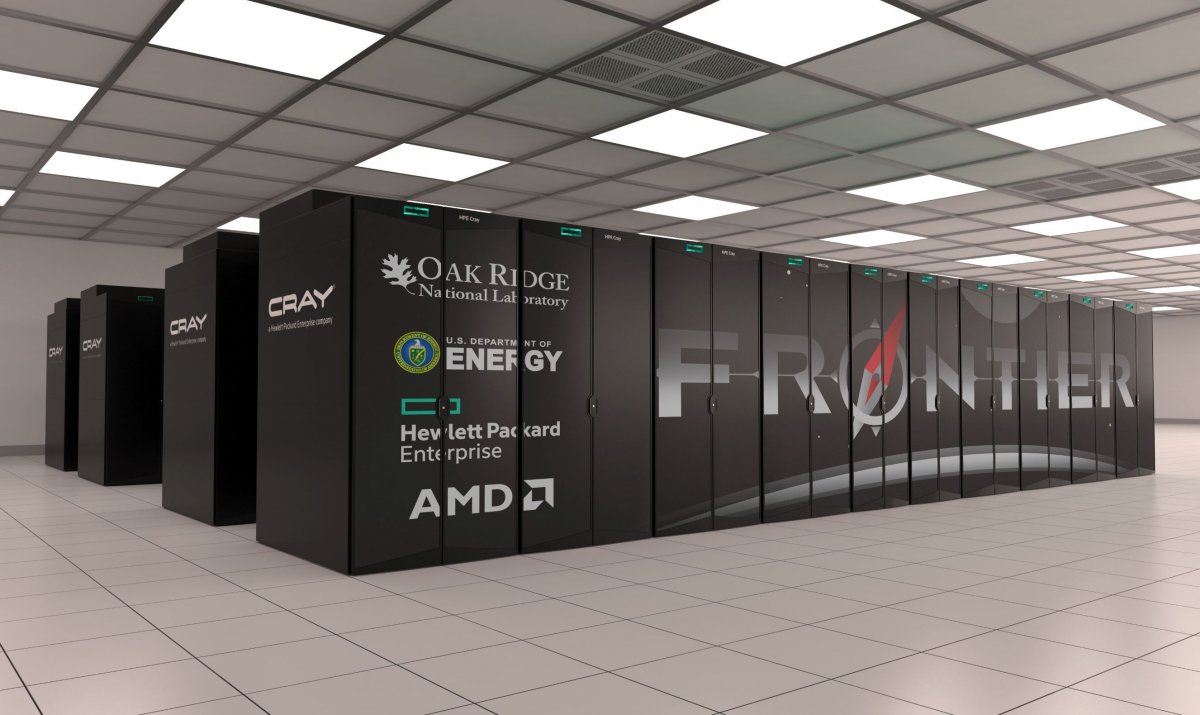 Foobar2000 scores with flexible skin, flexible tagging, facets and ready-made extensions in every usage aspect. However, Foobar2000 has just lost the usability of Spotify, as librespot was abandoned as an outdated streaming interface after many years. Spotify goes other ways and will only offer lossless if the market really wants it in the broad mass.

The HiRes niche will be left to competitors. If I want to lick HiRes from this honey pot, I’ll have to deal with Roon, Qobuz and/or Tidal. Whether I can safely hear the difference with my old ears and equipment, the next few years will tell.

The special case of large collection certainly doesn’t seem to me to be a mass effect with Roon, but after two years of reading here on the forum I have a good overview. The streaming dinosaurs tend to come here because all other solutions fail. Roon just appeals to the collector!

But collected is not only physical, but now the majority digital or dual.

Give it a rest?

I love Roon and fluctuate between frustration and fascination depending on the problem and solution. There are many customers who have not had a problem in their lifetime. Those who use it intensively with changing technology look for their solutions here and also share their pain when the love is not returned without interference at times. The pause in transmission would be the problem and not the solution. I continue and nurture my love for music now with Roon.

Willing to bet you have not heard 1/10th of that music. lol.

With passionate collectors, the danger is that you collect more than you can hear.

There are only 80000 of the many millions of artists. Half with only one song, which I have certainly actively selected after listening and taken into the collection. That’s where I’d like to start and continue with Roon and a recommendation system.

Other artists like Bert Kaempfert I have certainly heard thousands of times and also collected. But there are much less pieces of music than you think. The collection says there are 6485 pieces of music. The title “Ducky” is represented over 71 albums. The title “Wonderland” is represented over 57 albums. I enjoy finding the differences not only in running length, but presentation, recording, etc. Without question, there are more duplicates than versions. But collectors always want the whole album and all samplers. The Bert Kaempfert team is particularly talented in packaging the few hundred compositions. If I look at all the variants, so is differentiated in 113 variants:

Yes even one more space can be its own variation and from that point of view I don’t have to listen to this title over 100 times in a row but embedded in an album. The recording quality differs from album to album and the live recording from 1974 is certainly not a highlight in this respect. The lightness and slowness, the background vocals and much more, however, I find great.

I did that and also Clementine, Cantata, Lollypop…

If you only have 50000 titles, you should have changed from Clementine to Strawberry and then Lollypop or Cantata.

Lollypop is third for me behind Roon and Foobar2000.

Yes and amarok, audacious, gmusicbrowser, olivia, tauon, rhythmbox, elisa, juk, pragha, quot libet, sayonara, sonata… always from the point of view of simple player, player for large collections, good integration to the Internet…Foobar2000 and Roon occupy the top places. If I would also use video, would be Plex, Kodi, VLC… in the selection.

Damn, have you published any comparison of all of those players somewhere? I’d love to read it if you did

No I haven’t, but if you use Gnome as your desktop on Ubuntu or other distributions, you’ll warm to Lollypop immediately and intuitively. The KDE people like me need a little longer, but there is not much missing if you like Roon and have only a small collection. Information (lyrics, biography, artist pictures etc. are added and presented great, internet services like Youtube or Spotify are integrated…). But Tidal and Qobuz do not go!

Yeah, streaming services on Linux are a hassle (aside from Spotify). Strawberry supports both Tidal and Qobuz but requires a bit of fiddling to get working. Thanks for the recommendation, I’ll check out Lollypop

What Strwaberry offered me was not enough for me and Lollypop broke down because of the size. This collection can not manage every softwar and put well in the context of the Internet.

Because I love my collection.

That is obvious, have you considered that Roon is not a collectors tool, but rather a music enthusiast tool?

You have doubled your library since October;

Surely it’s not up to Roon to solve your issues? Or are you just taking the opportunity to show off?

That is obvious, have you considered that Roon is not a collectors tool, but rather a music enthusiast tool?

You have doubled your library since October;

Roon was already 20 years ago only for collectors and was the alternative to streaming. It works wonderfully!

Now that Qobuz and Tidal are on board, I like this solution because I can cross reference my collection.

It has not doubled, only the old system was replaced because with 16GB RAM could not be fully read. With 64GB, I don’t even need half of the existing capacity.

Attentive readers will have noticed right away that it only worked with the old system up to the 4th external hard drive. Later I could read all 7 with the new system.

After a reorganization I have only two hard disks with higher capacity.

Surely it’s not up to Roon to solve your issues? Or are you just taking the opportunity to show off?

There is no support request here, but a user report what Roon is able to solve.

I’d say that Roon is for collectors, enthusiasts and all combinations of the two!

Uwe, I would also suggest that you publish a review (with plenty of pictures) of all the music playing apps that you have tried. It would be very useful for many people, I’m sure.