Hey @Wdw, can you run this command in terminal and paste here an output ?

Sorry if not clear…the drives were not accessible as drives (to write files to, etc) although readable by ROON ROCK. Following the suggestions within this thread I unmounted and remounted using “cifs://rock/data”. the drives then showed themselves to be accessible to write to.
Following the latest update, build 300, the drives were, once again flagged as per the screen shot below. I, once again, repeated the procedure of unmounting and mounting with cifs://rock/data but in this case the music drive was still flagged as unreadable . Thanks for your assistance 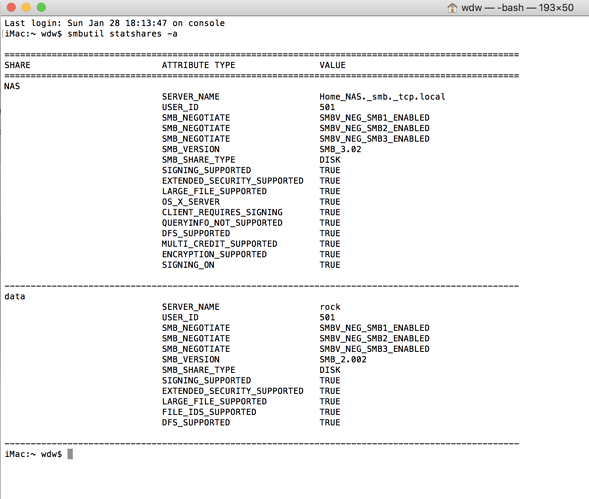 Basing on the command output ROCK’s Data folder was mounted via SMBv2, in case of using CIFS command SMBv1 must be shown. Not sure how that happened, but I recommend you to try the procedure once more:

Followed you and remounted the drive using cifs and it is now showing smb_1. So am wondering why this workaround is required. Is this an issue at my end or generated by ROON? Is it also true that SMBv1 is slower? Does the ROCK revert back to SMBv2 after a reboot? If so that could explain the change back to SMBv2.
Thanks for you assistance.

For the record, had the same problem with Rock - unable to connect to external USB drive. The internal ROCK music storage was fine. The fix @vova supplied above did the job. If it happens again I’ll document the full chain of events that led up to the problem appearing.

Just wanted to let you guys know that we’ve released a fix to this issue in latest ROCK update (build 156). If you aren’t running it yet, I strongly suggest to update your ROCK OS.
Current fix eliminates the need to mount the ROCK’s folder via CIFS protocol on OSX, from now on you can use SMB.