Focus "added in the last..." only goes back to 2019! Ticket In in original thread

I’ve been adding tracks and albums to Roon since 2016. I used to be able to go to focus and get a list of things I added in, say November to December of 2016. Now, when I try to do this, the options are limited. I can’t go back any further than 2019.

To put it mildly, and as much as I love Roon, this is ridiculous.

Perhaps there is another way around this that I don’t know?

Can anyone tell me how to see the list of albums I added in 2017?

If you go to the My Albums screen and sort by date added ascending, pick the first album and click on Info. What is the date added there?

Can anyone tell me how to see the list of albums I added in 2017?

You can’t. For some reason you can only bring up the last four years of data through focus. I don’t know why Roon implemented it this way.

Indeed - so then, its not just me! It really does seem weird - why just the last 4 years? So arbitrary.

@support when are you intending to fix this and return it to the status quo ante?

Yes I suppose I could do it like this - work out which ones were added in which year. But man, that is a manual job. The reason why we have computers is so we don’t have to do that! Basically they have undone - or, really, limited - a feature that should apply universally, as it did in earlier versions.

I suggested this to establish the date of your first import (according to Roon.) But now I see that you can only see four years of data using focus… not sure if that’s a regression or last time I used this, I was within four years.

why just the last 4 years?

There seem to be quite a few elements within Roon that follow a similar non-scalable pattern. Here’s another one: 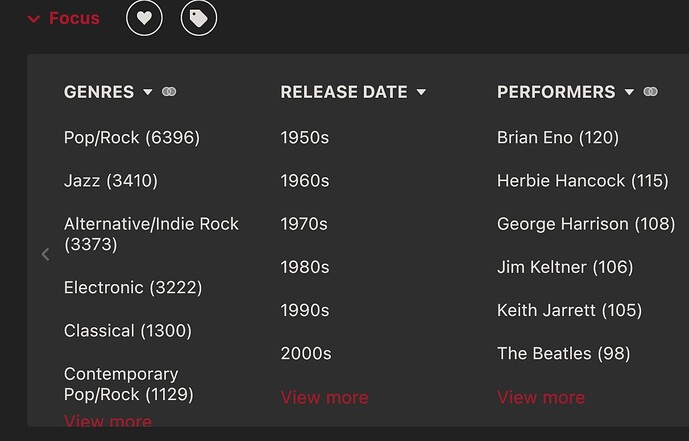 I’ve changed my top level genres, and they don’t fit into the allocated space - ‘View more’ is partially cut off. I think Roon need to revisit the idea that form should follow function.

Thank you for getting in touch about what you’re seeing. Can you post a screenshot of the UI and options that are available to you when focus by “ADDED IN THE LAST” so we can take a closer look? 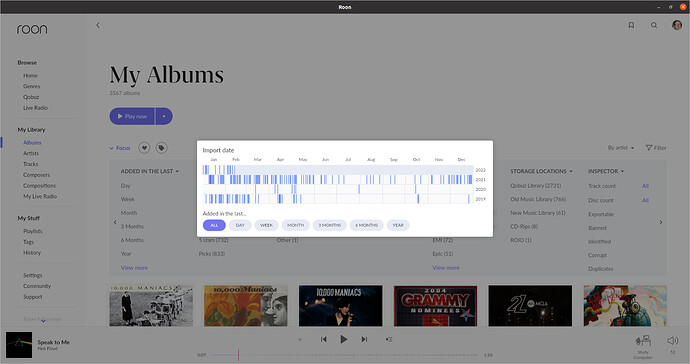 We’re still working on Focus, so the latest changes haven’t gone live yet, but we’ll have a look. @RoonQA please have a look – some of this is fixed, but I’m still seeing the Import Date heat map issues when comparing Albums vs Tracks. Thanks for letting us know @Hazen !

Thank you @Martin_Webster for posting the screenshot.

I was hoping to determine if this was the same issue that was reported in the previous thread, there’s a ticket in on this issue. It’s currently in the QA pipeline, though I can’t offer a specific timeline for a fix patch. We appreciate your patience while we work on this.

I’m going to close this duplicate thread and point to the tracking issue thread here:

Description Of Issue Relevant system info at bottom after the break. Hello @support I’m trying to create a Focus in Tracks or Albums using “Added in the last”, I’m only able to see back to Jan 1, 2018. I have Track Import Dates default to File Creation Time: [image] And this gives me stuff dating back to 2005, which seems correct: [image] I don’t know that I’ve ever seen a screen cap that goes back more than 3 or 4 years, including this thread from 2018: How can I 'focus' on added befor…