I have a Sony tablet SGP512 running Android 6.1. The text for artists and track information is Garbled, specifically the text is missing many letters. They are just not rendered.

Usually a sign of low graphics memory. Can you remove the app from memory and restart it?

I’ve had the same issue with my Galaxy tab a. A restart usually fixes it

I’ve seen this on my pixel C also.

I have had this on my Pixel C.

What is the fix here? Has to be an issue with the Roon app because everything else works fine on the tablet.

Apparently it is caused by a lack of cache space and I was told that I just needed to reboot the tablet. It does the trick but is clearly a little bit of a hassle.

It’s a problem that has been mentioned before, in other threads.

I’m not convinced that a low graphic memory is to blame, although it might be a reason that this is happening. Point is, why is it that the graphics memory can’t cope? This is (also) happening with a lot of Android devices of the latest or best available specs, so I’d expect there’s ample memory available.

@Carl_Henrik_Janson could be on to something, I guess. See his post. It just might apply to this problem too.

@joel … it’s maybe something to look into, makes sense to me, although I’m NOT an Android developer at all…

Exactly. If its a problem with Memory then its the app’s handling of memory which is to blame. Restarting the device is not a solution. Every other app works fine on my Pixel C which has great specs for a tablet.

They really need to sort out the problems with android.

it won’t… that changes the audio stack stuff, not the graphics work. The above explanation of running out of video memory is the cause here.

That implies that Android devices for the forseeable future will not be able to function without the problems documented in this and other threads.

So there’s nothing I can do about it, I can’t buy a tablet with significantly better specs. I can’t adjust settings.

And there’s nothing Roon can or will do about it. Am I right?

If I’m right, I find this hard to swallow. And I’m not convinced, as I wrote before. Frankly, I’m disappointed.

On a side note: I don’t want to sound cranky, but this advice is late in coming.

I will look into those settings, haven’t found them yet.

However, I’m curious to know why it is that only the Roon Remote app suffers from this behaviour. Can you explain that?

Because Roon is built on a unified OpenGL based graphics engine. It is what allows us to maintain identical functionality in all regards between android-tablet/ipad/desktop.

If we didnt do this, the android tablet app most likely would not exist.

Thanks @Danny. So OpenGL has it’s drawbacks, it needs bags of memory, and therefore RoonRemote on Android has it’s flaws, but they can’t be avoided on the developers side, so it’ll have to do.

I would have liked to know that before I spent my money on a Pixel C.

Can’t find any settings to tweak, though. Something like a setup where I can change the memory settings for artwork doesn’t seem to exist on either my Pixel C or my Oneplus One. Could you give some pointers? 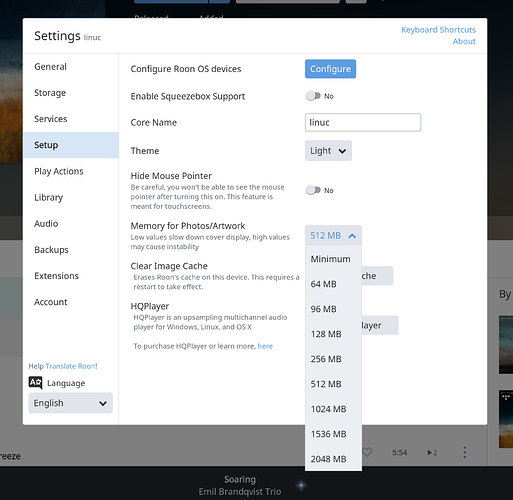 My pixel C has the setting. I put it to 256 and I have not seen missing text, so far.

@bearFNF
Hey Bob, thanks. I must be blind then

Mine looks like what Rene posted. Under Settings/Setup. Look for “Memory for Photos/Artwork”. I will screen shot it when I get home if you still need it.

I’ll have another try later today, thanks! Must indeed have been blind…