Have you bought new equipment just for roon?

Prior to starting roon a few weeks ago i was convinced my next amp/dac was going to be a Quad Vena 2 with the white gloss surround, but now I’m seriously considering the Cambridge Audio Cxa61 which is the same price but is roon tested, so it seems the roon integration has swung it for me.
I wish more hifi companies would hurry up and partner up with roon already!.

So sold it all, bought an auralic pre-amp, parasound amp and realized a significant improvement in music quality

Then, even though I am not very IT savvy built my own ROCK NUC successfully (the quality of ROONs guidance notes made this easy) which is now my ROON core. This produced a very significant improvement in sound quality

Since then have used Raspberry Pis (with ROON Bridge) to set up streaming music in two rooms, again with good quality

All in the name of Roon: SonicTransporter AP as Roon Core and for music storage (8TB HD); microRendu, then UltraRendu, now Auralic Aries G1; all connected by CAT 6. Mytek Brooklyn DAC. Couldn’t be happier with the investment.

Another +1 for the Orchard Audio PecanPi Streamers.

Difficult to know what to attribute to Roon, but spending on new gear became much easier now that it’s so easy to just listen to my nice local collection + the latest on Qobuz. QuietPC fanless NUC for Roon Core. 2 TB Samsung T5 SSD for core music storage. Synology NAS for backup. I’ve been through several Roon-compatible streamers from low $100 (Allo USBridge Player) to over $1000 (Metrum Ambre) depending on which DACs I’ve been using on my systems. With my current headphone system, I’m using another low $100s streamer: Pi 4B + Pi 2 Design Pi2AES. On the other hand, my current speaker system is a top-end Roon-compatible Linn Klimax system pricier than all my other gear put together, several times over.

I definitely got my Tidal and Qobuz subscription because of Roon.

For office 1 I got a RME ADI-2 DAC FS just to listen to music through Roon. In this case my Mac acts as bridge.

For office 2 I got Feniks Audio Speakers, also bought just to listen through Roon. Again a Mac as bridge.

I’m playing with Bluesound Node 2i, RPI4, in the main listening room. I’m thinking about buying a Project Stream Box S2 Ultra or a Digione Signature or Auralic Aries G1. Maybe I’m getting all of them.

Because Roon is so handy, I have split my main system into an analog and a digital path. On the analog side I still use my Mark Levinson No26s as preamp. On the digital side I go directly from the Antelope Audio Zodiac to the poweramp. I could use the Antelope also as analog preamp, but with analog I prefer the ML26s. So I have to plug in the poweramps to either of them I want to listen to.

NUC 7i7, Denafrips Terminator and Auralic Aries 2 were initially bought to use with Roon and Qobuz. (A second CD deck was later bought to also use the Terminator).

Yes. A Nucleus and a Chord Qtest.

I bought a 2012 Mac Mini for the core (I used my MBP for the Roon trial). The Mac mini isn’t ‘just’ for Roon as I use it as a HTPC as well, but most of the time it just runs Roon.

I bought a Google Home Hub to display album info, but it was a waste of money because Chromecast ‘display’ doesn’t work on the home hub for more than 10 mins or so and has never been fixed, so it’s been relegated to the bedroom.

To replace the failed Home Hub, I got an Amazon Fire HD and Show Mode Dock. That sits in my lounge and displays Roon and I can pick it up and use it as a remote. Works really well, apart from the recent Android display bug that I’m sure will get fixed soon.

Bought a Roon Ready streamer upgrade for my beloved DAC (Moon 280D). It was supposed to be a modest $500 upgrade, but it worked so well, and sounded so much better than my Squeezebox Touch that I “had” to buy another 280D for my bedroom system.

I’ve bought an Intel NUC 8i5 for running ROCK, Allo DigiOne for the living room, MicroRendu & Uptone LPS for the den.

Intel NUC8i5BEH for ROCK, 250GB EVO NVMe SSD, 1TB sata 3 EVO SSD, Allo USBridge, Allo Shanti linear PSU, fiber ethernet link from the router to USbridge, Topping DX7s dac (supported directly by Ropieee) all in the past month, and this week RPI 4B, official 7 inch screen, and some other odds & ends to use with a cheap LEAF dac for a second zone in my home office.

All of this cost less than the Sony HAP Z1ES they are replacing. (And sounds better too)

After a year with Roon I made an upgrade to my system to optimize Roon use.

I installed Roon on a dedicated i5 microPC running Windows 10 that was plugged into my DEQX PDC 2.6P via an SPDIF cable. All was well and good with that.

A year later I replaced the PDC 2.6P with a new DEQX HDP-5. The HDP-5 is connected via Ethernet to my home network and Roon can stream directly to it and I can now (arguably) benefit from HD audio above 24 bit and 96khz. The HDP-5 sounds better with any source as it’s just a better piece of kit but it’s nice to know that if there was a benefit to HD sources I’d be able to realize it.

I’ve moved the Roon PC and have it now connected via HDMI to a Pioneer surround sound receiver and Martin Logan based system in another room that isn’t dedicated for listening and we now get to enjoy Roon there as well.

My poor old turntable is just collecting dust these days.

Just bought this Meridian Prime Power Supply today. Will see for myself if power supply makes any difference in SQ. 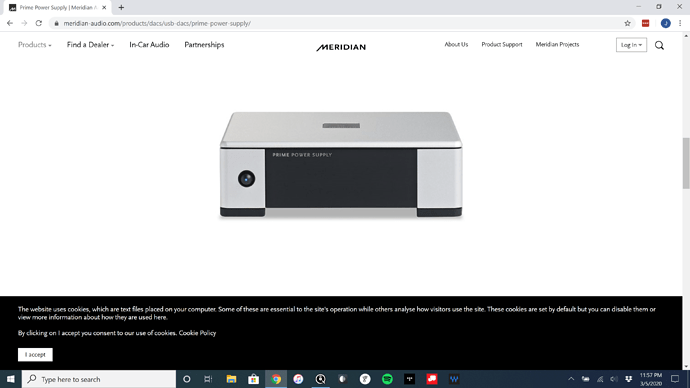 And yes, it does. The Meridian Prime system sounds great with this power supply.

Yes! Just bought and installed the Nucleus and transferred my licence from computer to Nucleus, easy and seamless process! Also using AudioQuest Ethernet cable and it just works, great investment.

did you find any audible difference? not that it matters perhaps.