Having a problem with duplicate plays/scrobbles [Roon Investigating]

Local library files are stored on a Synology NAS running DSM 7.1-42661 Update 4. The NAS and Roon Core server are connected over Cat6 ethernet via SMB mount.

I’m having an issue with duplicate track play counts & last.fm scrobbles. It seems to coincide with any time I have to pause and later resume playback. It happens with content streaming from Qobuz or with local library. See screenshots for a couple of examples. I played both of these albums today, each track was played only once; however, some have more than 1 play count recorded. Those same tracks have extra scrobbles logged in my last.fm account. I paid close attention and found that each of these were tracks that I paused and later resumed, I think those should only count as a single play as I did not restart the track or play them a 2nd time. 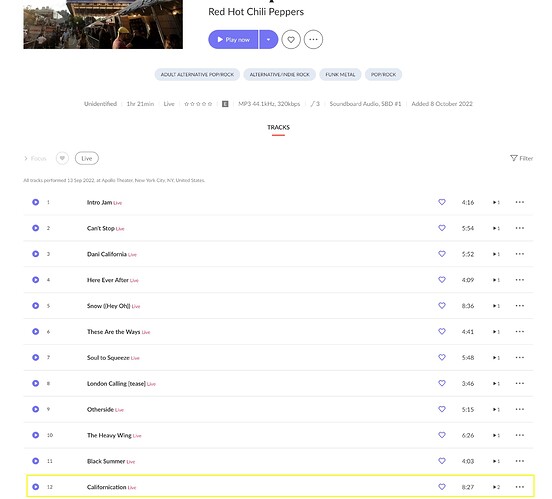 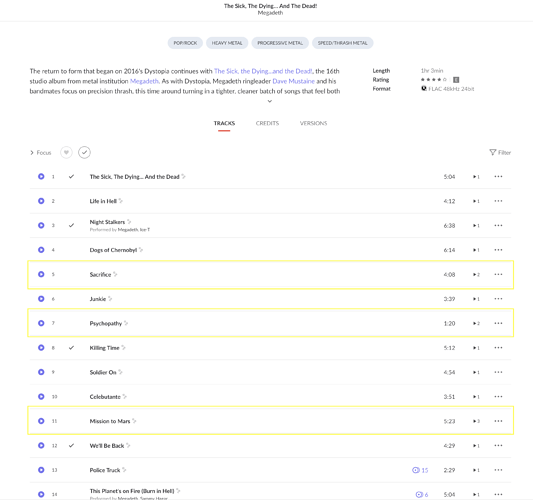 I should add that I listened to the Megadeth album while out of the house so that was utilizing my iPhone’s 5G connection to t-mobile. I listened to the RHCP album at home on the same network as my Roon Core server. The same behavior is evident in either environment and consistently occurs when I pause and later resume a track.

Same issue for me with ARC.

Good to know I’m not alone. Have you seen it reported/discussed elsewhere here? Any acknowledgements from Roon staff?

No I did not really pay attention to be honest. I just delete my duplicate scrobbles as soon as I have paused.

This is something that should be fixed tho.

Hi guy’s this is not a new issue and thread’s have been raised in the past.

Many times I have had to clear out my scrobbles (mostly from Roon) when they have gone crazy.
Sadly this doesn’t seem to have been improved over the last few years.

I’m actually less concerned about the duplicate scrobbles. The duplicate play counts (within Roon itself) are more problematic when trying to review your listening history to get a sense for what you’ve been listening to most.

I’ve had a problem in the past with duplicates specifically from Qobuz. I can’t find the thread, but I know that the duplication was caused by Qobuz’s behavior rather than Roon. If you have scrobbling turned on in the Qobuz app itself, outside of Roon, Roon scrobbles, Qobuz knows the track was played, and then Qobuz scrobbles. For whatever reason, this doesn’t happen with Tidal. tl:dr - try turning off scrobbling in the Qobuz app and see if that makes a difference.

Oh now that might well be a different issue. I have never really noticed any duplicates on the Roon listening side.
I mostly play my local library though, with maybe 10 - 15% Tidal for listening to new music.

Thanks, @kneville @Michael_Harris. In my case Qobuz is not connected to last.fm and I’m experiencing the same behavior with Qobuz and local library (files on my NAS).

That is a strange one. Just gone back over the last several days of my history and not a single duplicate on Roon, I run on Rock and I can’t think that I have ever seen it.

If it is happening on your local library as well then something needs a bit of investigation. Are you running Roon on your NAS as well as storing music on the NAS?

Yes, for me it seems to happen when listening via ARC on my iPhone with local files at home.

So you are running on a MacBook Eric?
Certainly puts my thoughts about NAS to bed

I use ARC in the week and I didn’t see it but it could be having issues knowing exactly what has been synched, and I will keep an eye out for it this week

My local library files are stored on a Synology NAS connected (via crossover Cat6 ethernet) via SMB to an intel Core i7 based server running Ubuntu Server 20.04.5 LTS x64, this is where Roon Core is running.

Yes the core is on the MacBook Pro. I’ll do some additional testing as well this week.

The Roon support team will be back in Monday, hopefully they can request access to your logs and get some understanding of what is happening for you

Thanks, @Michael_Harris. This is my hope as well!

Bump, anyone from Roon support?

Can I get a response or acknowledgement from the Roon team on this?

I’m finding that I’m getting duplicate scrobbles to last.fm from ARC whenever the stream is interrupted by a notification, or the stream is paused for a while and then resumed. Typically this should only result in a single scrobble per track, but it seems something is going on with ARC that causes Roon to scrobble the track multiple times.

I’m running Roon ROCK with ARC on Android if it matters.