Tried to create an empty database so i renamed the roonserver db to old.
At startup roonserver created a new database.
Reconfigured Roon, pointed to look for my own music on de external drive.
So far so good.
After a day Roon started to import all my music from Qobuz automatically again.
It’s apparently impossible to get rid of some music.

If you sync Qobuz in Roon it will import your Qobuz library. That’s expected behavior. You can click the ellipsis button to remove an album you no longer want in your library. Additionally, you can select several albums at a time on your albums page to remove multiple titles.

That’s the problem i have.
When i delete a number of albums/tracks found on Qobuz, one the next days, with a resync of Qobuz, they are back in my tracklist.

And when Roonserver is resyncing i get the hiccups (performance problems).
Yet the server has enough resources left.

Yes, if an album is still in your Qobuz favorites it’s going to be reimported in Roon. If you’d like to remove an album completely you’ll need to click the ellipsis button on the album page then Edit and scroll down to Delete Album. That will remove it from Roon and Qobuz. 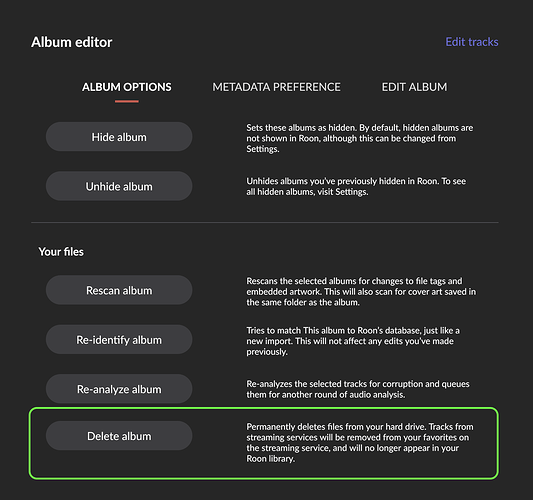 I have been following this procedure.
Tried it on the latest release of Roon.
And they delete tracks return in my library after a while.

Something is nog being done properly in the procedure.

Can you select a single album to delete using the steps above then immediately go to Qobuz and see if the album was removed? Please let me know if the deletion was successful. Thanks!

Done your procedure with 1 album.
This disappears from the favourites in Qobuze.

Have been deleting a group of albums from qobuz favourites and in Roon.
These group can back into Roon not in the favourites of Qobuz.

I am debugging Roon.
Think i have to send an invoice.
Who do i contact?

Installed the latest upgrade.
Problem of hiccups persists
Problem of mass deletion of tracks not solved either.

Is anybody looking into to it.
I notice that others have the same issue.

Sorry to hear that you’re still having problems with this. In checking your system diagnostics I see that you still have Roon Server and Roon Remote on that machine. Are you unwilling to uninstall Remote to see if that helps? Your large library of 400,000 tracks could be too much for that machine. It’s definitely going to struggle with only 8gb of RAM.

Have you been making regular backups of your library? If so, I think removing your Qobuz_account file and setting the current database aside, and trying a reinstall may be in order.

Please let us know if the above procedure resolves the issue.

Roon remote is not running on the server.
I have the latest versions installed.
The server is only used for Roon.
I use it on my laptop and on my phone.
I did this procedure before and after connecting my Qobuz-account all the tracks are imported again without restoring the database.
I want to delete a lot of favourites but it has to go 1 by 1.
When i do mass delete of tracks later on they are imported again.
I am not going to invest in new server, especially not the Nucleus, as long this doesn’t work properly.

It was working fine until July/August 2021
What changed back then?

Apparently i am not the only one with a performance issue?

Has anyone else noticed a serious decline in Roon’s performance of the last couple weeks? I have only been using Roon for a few months, but since I have, its been flawless, snappy, fast, solid, stable, nothing really negative at all to mention, dare I say it has been perfect?. I had never even had to restart the app once! However, in the last week more so, I have had to restart it daily as it hangs, and is extremely slow, or just flat out unresponsive, even had to restart my tab a couple times. …

@Ulrik_Deriemaecker i know/use Roon since August 2020 with fascination and frustration, but i was always willing to learn from this community how to manage my millions of titles with Roon. I don’t know any other software that does it better. I came from Foobar2000 and had to split it into two databases there as a 32bit application.

If many hundreds of thousands of music tracks are to be shared between Qobuz and Roon, it won’t work either because Qobuz itself can’t handle that amount. This is also the situation with Tidal and no solution with other providers would be better.

Only Roon can manage much more local music tracks, but not with 8 GB and i5. If the processor lacks power or a main memory is completely full, any system will go to its knees.

I see suggestions to start there first. Were these not good considerations for you?

Until the summer of 21 no problem.
Then it changed.
When i want to delete a number of tracks from the list a bit later they are imported again from itself. Somewhere it “recovers” these tracks.
There are different issues playing on the same time.

I will not invest in a new server before i am sure that my problem will be solved.
And for now there is nog guarantee.

I will not invest in a new server before i am sure that my problem will be solved.

Thanks for trying to get clarification here. I am certainly not team or developer level and there are many Roon customers with more or years of experience.

I got in a bit early with version 1.7 and have gone through every release upgrade 1.8, going back and forward at times just to see if it makes a difference.

I also had no problems with my old system for many months at first because it was still reading everything in, identifying it and building the database completely. This then gets bigger by the day until the roon system is overwhelmed after months. So it may be that the observation in summer 21 fits into your Release 884 timeline purely by accident.

Now that the database has become way too big for 8 GB, nothing works, not even deleting in Roon directly. There is simply not enough main memory left for processing. You don’t need a new device either. The MacMini 2018 only needs to be upgraded in two points.

So you could remove Roon completely and all subfolders and start from scratch. You would again have no problems for many weeks and then it will again be too tight for reasonable processing.

Without question you could also be affected by a problem the team is working on, but that is impossible to test without higher performance of the server (small cheap rebuild will do).

It has an internal SSD
My own music is on an external SSD
Indeed only 8GB internal memory.
I did reinstall roon from scratch by deleting the subfolders and roon automatically imports all the old music.
Because apparently the “favourites” of Qobuz are imported again.

I would not scan my own collection and only stream from Qobuz to see if this limited usage changes the problem. If the 400000+ are own local files, a first match ball to the good game with Qobuz should already have taken place.

If that is enjoyable, the second step is the experience with 50000 music titles.

After another good week then the attempt with 1000000 music titles. Then the expansion of the main memory to 16 GB and the attempt to play the 400000 with it.

I want to delete a big number of tracks.
But because of one or another reason mass delete does not work.
It has to do with something between roon and qobuz.

Do you still get to this settings screen despite being overloaded? 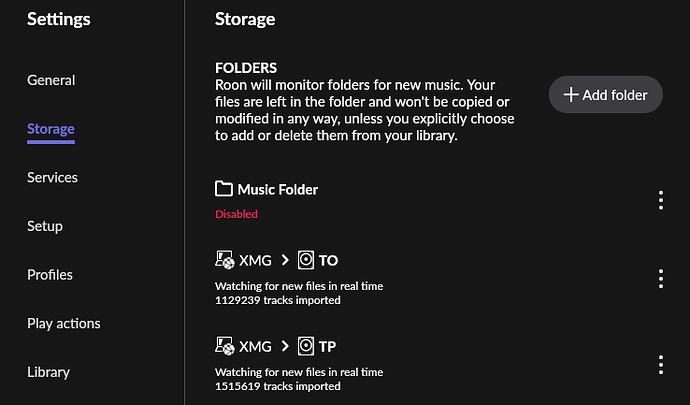 Then you could disable a folder that contains a lot of files like I did via the three dots. After that Qobuz should recover.

Do you also want to delete Qobuz albums? That goes very well via website or app without Roon. Roon will automatically apply all changes later.