Has anyone else noticed a serious decline in Roon’s performance of the last couple weeks? I have only been using Roon for a few months, but since I have, its been flawless, snappy, fast, solid, stable, nothing really negative at all to mention, dare I say it has been perfect?. I had never even had to restart the app once! However, in the last week more so, I have had to restart it daily as it hangs, and is extremely slow, or just flat out unresponsive, even had to restart my tab a couple times. The only changes I have made anywhere are Roon updates. I can’t be the only one?

Update 952 is causing a lot of issues as you are experiencing. It has been flagged to @support and hopefully this will be resolved with the next update.

I wish they’d stop updating it so often. It’s like they fix one issue but create others. We are essentially software testers. Roon may end up being a victim of it’s own success if they are not careful, with it trying to be all things to all men, it’ll end up as unusable bloatware. I really hope not, but I do think it’s a very real possibility. in 952, nearly every time I click on settings Roon crashes.

Yeah I agree. I am glad I went monthly, cause quite frankly I am sick of restarting the app every time I have to use it, not to mention the TIDAL play/pause STILL not fixed. It was working perfectly, so why fix what 'aint broke? just to break it more? Too many issues lately.

Yes, same, I wouldn’t pay for a lifetime subs - annual subs is best way for me, as can walk away if it ever gets too frustrating. That’s also why I won’t invest in a NUC or Nucleus. It sounds just great running server from laptop.

There were more complaints that bug fixes were only deployed with feature updates. Roon decided to switch, damned if you do…
Things break in software, given a 300k plus user base the complaints are tiny in number, though important to the affected individuals.

given a 300k plus user base the complaints are tiny in number, though important to the affected individuals.

I’m sure this is true but equally I suspect many of us can’t be bothered to go through the support process for each issue, particularly if it’s small, on the basis that it’s likely the same as that experienced by others and will therefore be fixed in due course.

For example, I’ve experienced increasing RAM usage and crashes every few days on Android for literally years (different devices and different versions of Android)…these have increased or decreased in frequency with different builds but they don’t affect me enough to go through the hassle of a support request. Another example - in the past my ROCK NUC process sometimes restarted of its own accord when unattended - didn’t impact on me at all but a bit of a curiosity. Not sure if if it still does it. I’ve also seen minor UI inconsistencies at times, but again, I’m sure they’ll be resolved. Arguably I should report more things but I’d prefer to just listen to music and I’m fortunate that none of the issues are seriously bothersome to me.

Roon has become a chore,ur always trying to fix something,I jst want to enjoy my music,jst give me a nice ui,no lag,I have gave up with roon as one update feels like there going on the right direction then the next one breaks it all again,totally inconsistent,tidal app might not be as nice as roon buts it more stable and zero lag

Did you clear your Roon cache yet? If not this might helpl.

I think you may well be right . I “joined” Roon almost 6 years ago and had my share of issues.

My issues were based NOT on performance but on feature set . As a classical listener I found certain classical handling weak eg Box Sets. I am still here , my principal is that if you aren’t a member of a club you cannot argue about or dictate its rules . Being a user I feel justified in adding feature requests and commenting on failings.

Criticism or suggestion from the inside is valid .

In performance terms I have run Roon on 2 different i7/16GB desktop “towers” over the years and have recently (3 months) converted to ROCK/NUC S10 i7/32GB .

I have seen no performance change but I have 2 peculiarities I suppose , I have 32GB RAM , a deliberate decision when I set up the NUC on the basis that RAM is relatively cheap. The second is that I live in a country where we have massive lightening storms in summer and an ailing electricity utility all the year round so my systems are restarted daily.

I think the restart situation buffers me from any Memory Leaks as are being suggested.

I have yet to find anything that vaguely compares to Roon, Warts En All so I will remain a user until one of us fails

The second is that I live in a country where we have massive lightening storms in summer and an ailing electricity utility all the year round so my systems are restarted daily.

Yes that will buffer you from a lot of Roons foibles.

It has got worse of late in one way or another there is no doubt of that. All apps have become very buggy, I use a Mac, Windows surface laptop and Android for remotes and all suffer from issues that are pretty annoying. Editing your library for any length of time causes the memory to get out of control, apps start to slow and eventually just hang. It seems the constant back and forward that editing requires you to do takes its toll. Andorid has never been worse than it is now for me it’s a very poor experience.

So memory useage just on a remote is stupidly high on windows 11. started at 350mb its now climbing every time Iook at different library sections its maxed out this machine and now wont load any more images. This is very broken and never been like this before and its running at a snails pace. 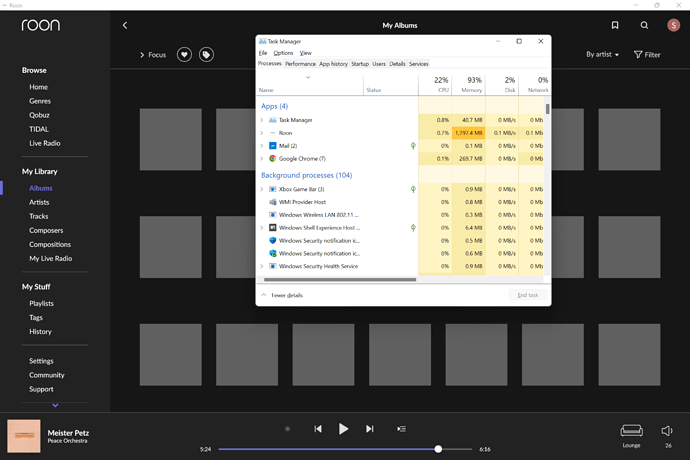 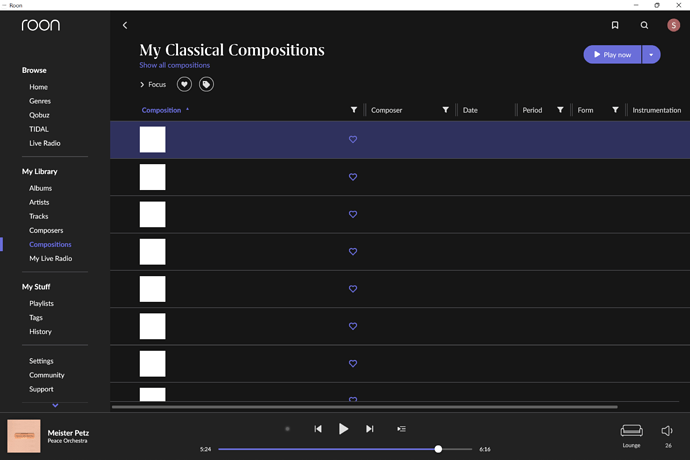 My core has just started to hang up randomly, causing me to have to restart Roon or reboot the core to restore access from my remote stations. Never happened before the last update.

Yes. Getting tired of this. Just want to play music. iPhone app has become unusable. Gonna try Audivarna I think if this doesn’t get stable soon.

I’m seeing similar problems with memory usage - up, up and away!

Wish I’d read this sooner. I just went out and bought a new NUC thinking that is was my setup that was the problem.

As for “you can’t write software without bug”, sure, but you can not deploy it to 100% of your users at once, and you can certainly roll back if it causes problems.

I am starting to see hanging too, only since latest build.

Lot of issues with slow performance here as well, particularly with Android and iOS remote devices–although,as noted above, it seems to be core related. I’ve been a Roon lifetime user since almost the beginning and I’ve never experienced such lag.

Same here is becoming so annoyng, been a customer since 2015, and never have expierenced such troubles it painfull really to want to listen to music and ten minutes later i am stiil waiting for any track to start

Same issues here. Roon clients very slow to wake up. Closing/restarting seems to fix. Pain. Roon is becoming tiresome. Too many issues. Such great software - when it works.