How to change the Date Added?

Good question, I sometimes go back and review an albums metadata with ‘Metadatics’ and save any changes but would like to keep the original ‘date added’ info

I also hoped to get more realistic adding dates by using the creation date of the file, but, as in your case, the results were no good. With some googling I learned that it depends on the used operating system and file system if the creation date is kept available.

I’m using Linux with the ext4 file system and for this combination there is no standardized way to access the creation date of a file, it seems the modification date is returned instead.

Also for my case, my oldest files are copied between operating systems and file systems for the last ten years. For these files realistic creation dates are long gone.

I now fully rely on the ‘date added’ that is stored in the Roon database. For the initial import this doesn’t provide much info, but for all that is added afterwards it does.

Still, if the Roon team can somehow extract more realistic dates from my files I will be happy to use them.

I am in a Windows environment. For quite some time now, I use CATraxx to manage my musical library. Every CD and vinyl I bought is encoded in CATraxx, and so I know the purchase date of each one.
I sometimes like to navigate through my albums according to their date of acquisition (for example, to see the albums I have purchased in the last few months), and because Roon offers the possibility to sort the albums on the basis of their creation date, I thought I could use this option in order to sort my albums according to their purchase date. At first sight, it sounds very simple: I use Attribute Changer to change the creation date (I set the creation date to the date of acquisition), and then, in Roon, I select “Prefer File Creation” for the Date Added in the Album Editor.

Here’s a screenshot of the Attribute Changer window: 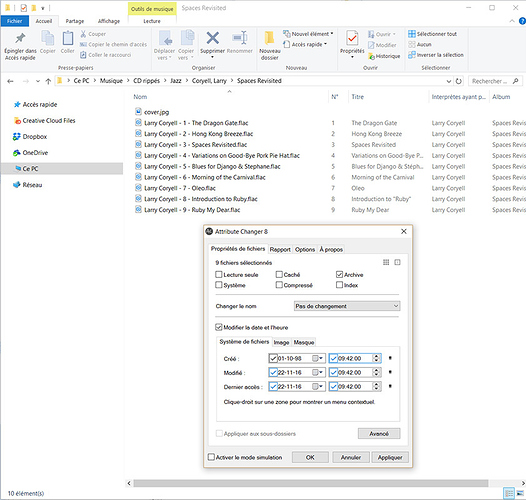 And the confirmation that the creation date as been successfully changed (file properties window): 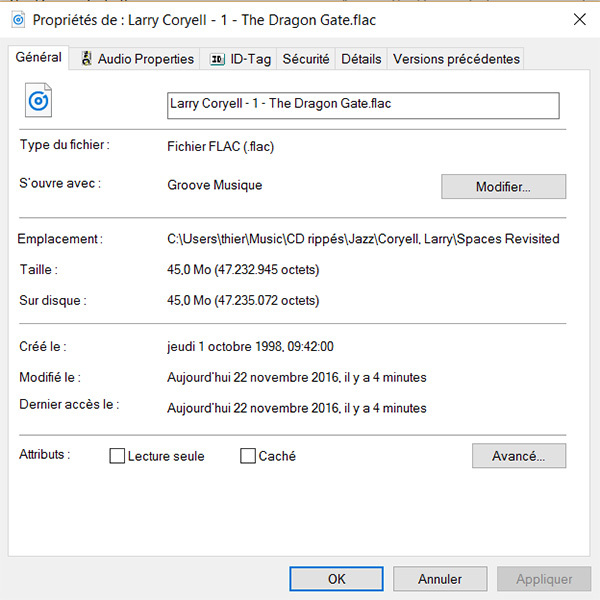 So, why doesn’t Roon use the file creation date?
Is it a bug? In this case, it should be corrected.
But if the problem is actually more complicated (e.g., depending of the operating system and/or the file system used, as Jan suggested) and cannot be solved, then this option (“Prefer File Creation” for the Date Added) should be removed, I think.

Hi @Thierry_Meulemans ----- Thank you for the report and apologies for the troubles. May I kindly ask you please give us the details of your setup as seen here.

Furthermore, would you be able to send us a sample of content that you are noticing this issue with via a dropbox link in a PM? We would like to examine this issue in house to try and reproduce. If you could compress the content first and then provide a download link in a PM we would greatly appreciate it. If you are not a dropbox user I can provide another upload method.

Hereafter the details of my setup, as well as information regarding my network description. 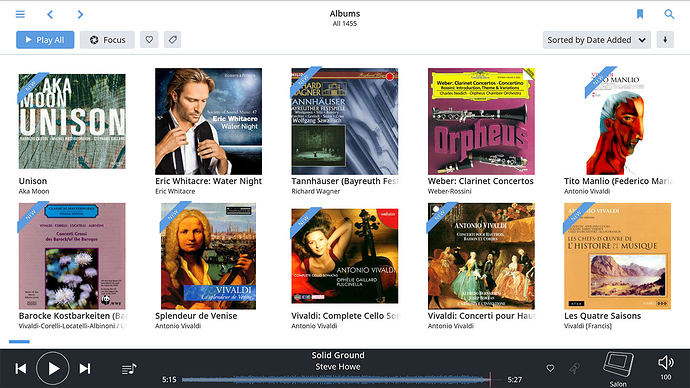 Thank you for your help (if you need other information, don’t hesitate to ask).

Hi @Thierry_Meulemans ----- Thank you so much for the follow up and the feedback! I wanted to confirm that the provided content has been received and has been placed into my testing queue for evaluation. Once I have had chance to test the media, I will follow back up with you asap with my thoughts/findings. I appreciate your patience as we look into this issue!

Hi @Thierry_Meulemans ---- Thank you for your patience while we’ve been looking into this issue for you.

Moving forward, I would like to propose the following test. Select an album in your library that was imported some amount of months ago. In Windows, make any change to all the files on the album, such as adding or updating a tag. Please do this with standard tag editing software or from the Windows file property screen, as opposed to using the file tools you mentioned earlier.

Once the new modification date is shown in Windows for all the media, navigate to the content in Roon, select all the tracks, and use Roon’s editing features to set the import date to the newly edited modification time.

If the import dates update to reflect the change(s) made in Windows, this will be an important clue about what’s going on here. Let us know how it goes!

Hi Eric,
Thanks a lot.
I did as you suggested. I selected the album “Like Minds” (Gary Burton), containing files created in november 2016. In Roon, after having setted the import date to the file creation date, here is what I obtain when I sort the albums by Date Added: 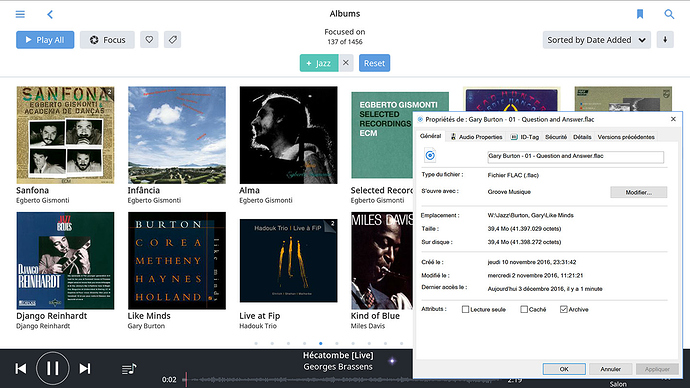 Then, I changed (on the Windows property screen) the content of a tag for all the files of the album, as you suggested (I simply added a commentary).
In Roon, I re-scanned the album and setted the import date to the file creation date again.
You see on the following picture that the album is now considered by Roon as the most recent one (it is now at the first place of the first screen of the album list): 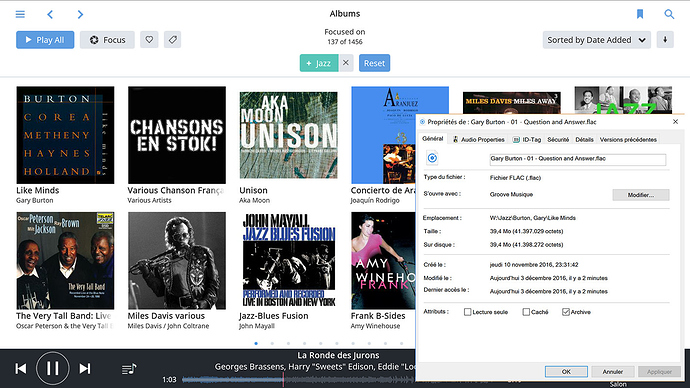 So, sorting the albums according to their Import Date setted to the File Creation Date doesn’t seem to work in my case (it is as if Roon could only sort according the the modification date…).

Unless I am doing something wrong?

Hi @Thierry_Meulemans ----- Thank you for the follow up and sharing your feedback/observations with me. We went back and re-tested with the provided content again this evening and are still having a hard time reproducing this behavior.

Can you confirm for me if you are editing this information from the “tracks” listing or from the “albums” screen. Some screen grabs of the procedure would greatly help us verify that we are following in the same “foot steps”.