A few weeks ago, soon after the update, I got an error message saying that Roon couldn’t find my database. I run Roon on my Amazon tablet and except any upgrades that come up. I couldn’t get anywhere on the tablet, so I tried to open Roon on my Mac. It said, I needed an upgrade and it wouldn’t open so I tried to get the upgrade which would not work. On the help forums someone said to go straight to the Roon sight and download the latest version if this happens.

I downloaded the latest version and my music which is stored on my Nucleus and backed up on a WD NAS, came back, but my playlists were lost as well as my Roon backups which no longer exist anywhere. I am sure that I had backups as I occasionally checked to make sure Roon showed when my last backup was and when the next was scheduled.

So basically, I am back to day 1 of Roon but I have no playlists. When I originally got Roon, I could not get my playlists to transfer from JRiver to Roon so I remade them all . This took a good month working on it every night. Now Roon has lost them and I do not ever want to have to make them over again.

I have tried to follow the directions to export playlists from JRiver and import them to Roon and believes that I have done so correctly, but they do not show up in Roon.

I would be fine if all my Roon data is lost , as long as I can get my playlists back. Below, I have included screenshots of every step that seemed important to show. I put the playlists in a folder to export them from JRiver. Then I put the folder in my FLAC folder that contains all my music and is in my Nucleus. Can’t for the life of me see where I went wrong. 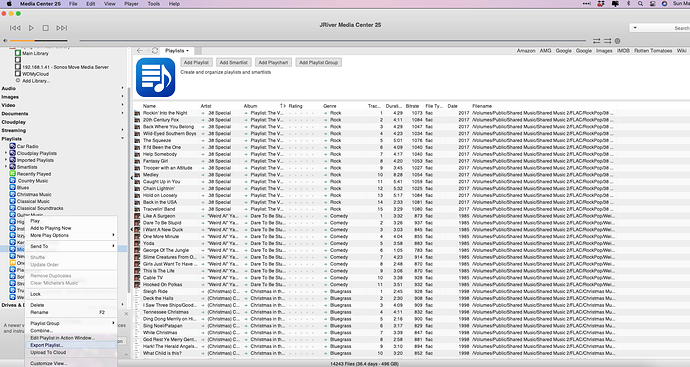 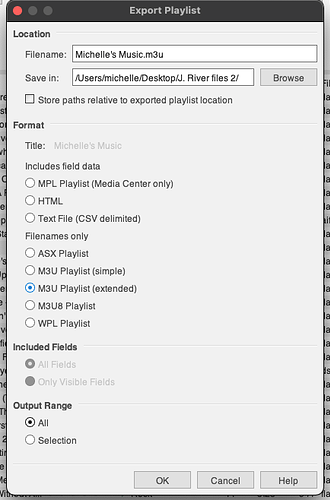 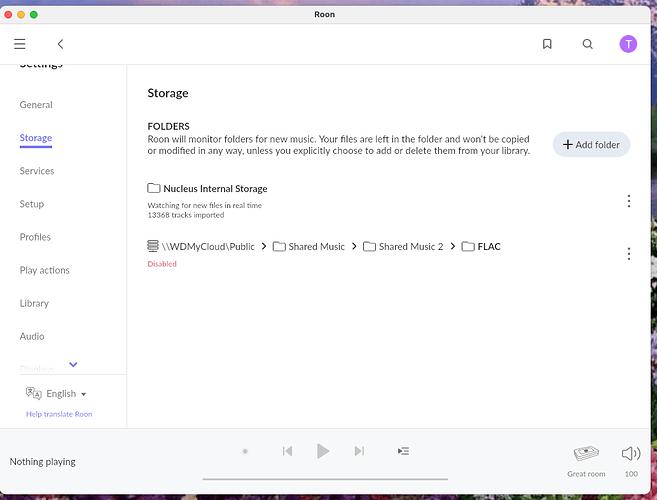 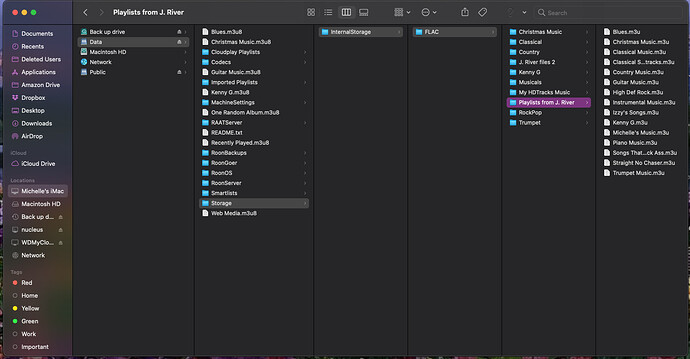 The first issue I see is that you J.River playlists were made to point to files in /Volumes/Public/Shared Music/Shared Music 2/FLAC which is not a watched folder since you have ti disabled in Roon. Roon’s help article states that the playlist m3u files, must be located in the same watched folder as the music files it points to, which is not the case currently. I looks like you may have put copies of these files into your Nucleus’ Watched folder in the folder “JRiver files 2”. But your playlist does not point to this location. Your playlists points to the location shown in JRiver in your screen shot, which is /Volumes/Public/Shared Music/Shared Music 2/FLAC/. It looks like you already have Roon pointed to this folder, but you have it disabled so Roon cannot see it. If you want to use this drive and location you would need to enable this location as a watched folder in Roon and put the m3u playlist files in that same folder. Roon’s help article is a good place to start https://help.roonlabs.com/portal/en/kb/articles/importing-playlists#M3U___Other_Playlist_Files

ok. So My Nucleus is an exact copy of that other folder /Volumes/public/sharedmusic/sharedmusic2/flac. I tried pointing Roon to this folder first and when it didnt work, I disabled it because Roon would just constantly search that folder looking for new files, but it never found the playlists and without the playlists, I figured there was no use having Roon search constantly through that folder of 14000 files. So then I tried putting the playlists in the nucleus as a second attempt. as for the article on importing playlists, I had read that and believe that I did everything it said. other than what you pointed out, which I had tried at first

as for your other option, at first glance, I’m not sure how to do it but I will study it and give it a try.

I put them in the root folder of my music files as “m3u simple” playlists with “paths relative to the playlist location.”

The root folder is the same folder I have set for roon to watch. 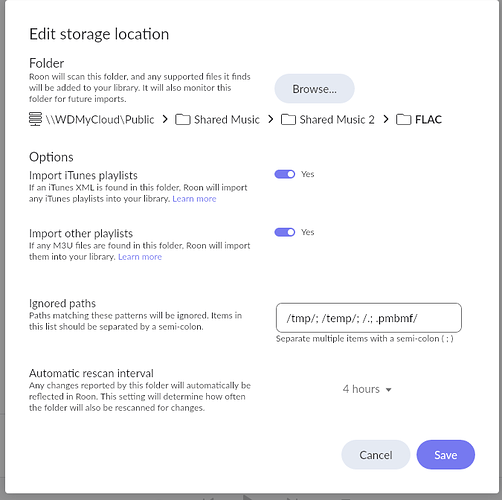 The WD Mycloud is connected by ethernet to the router as is the Nucleus and also my BelCanto E1x and also my crappy computer. I believe cat7 was the best available when I did this. Nothing is wifi.

The WD Mycloud is a NAS that I used for Jriver and now I use it as a backup. What you bring up here is something that has confused me. My Nucleus has an exact copy of the music on the NAS. Roon say the WD at the time as the copy in the Nucleus came from the NAS. As you say, JRiver sees the music in the NAS, and maybe not the copy in the Nucleus. I would rather it saw the playlists in the Nucleus that accessing them from the WD. If it can only access the playlists from the WD, then what happens when the WD dies? Are my playlists then gone forever? I would think, like you said, if all my music files are on the Nucleus and are an exact duplicate of what’s on the WD, then can we get Roon to read the playlists from the copy inside the Nucleus? I have to believe we can otherwise if the NAS dies then all is gone, and that makes no sense because that would mean you can’t back up playlists

So if you were to make copies of your music files and move them to a a different location, how would you tell JRiver to use the files in the new location so that your playlists still worked? That is all he needs to do and then he can export his playlists again with them being mapped to the new location of the files.

obviously this is not right because it renders my nucleus storage as useless because now I’ll be using the music from the NAS.

This really should be a simple thing

Ok. But if you dont want to use this NAS in Roon, then you want to find out how to point your JRiver library to your Nucleus and then you can re-export your playlist files. You want to use the simple m3u option and the relative paths option when you do this export, like it mentions on roons help page. I agree it should not be hard to do this.

right. that makes sense. I tried a little last night but could not figure out how to get JRiver to see my Nucleus yet.

Wow, that is really unfortunate. Did you try using the backups through Roon? What happened why you tried using a backup and it failed? What message did Roon Display? I am just curious, as I have never experienced this myself. Of course, getting these to work would be far less work that importing playlists from JRiver, so hopefully there is a way

busy day yesterday. didnt have a chance to try anything . I’ll post some screen shots of it later 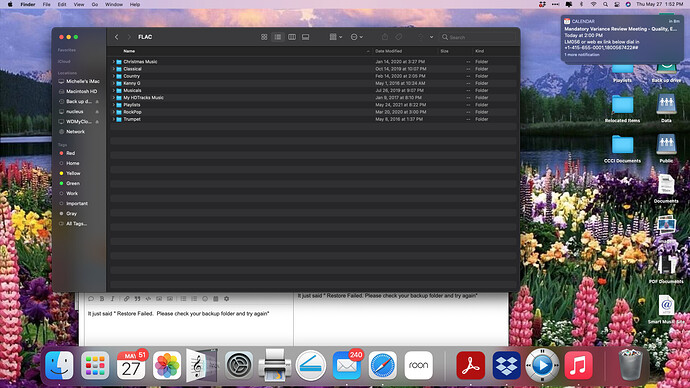 This is a screenshot of my Flac folder inside my WD MyCloud. 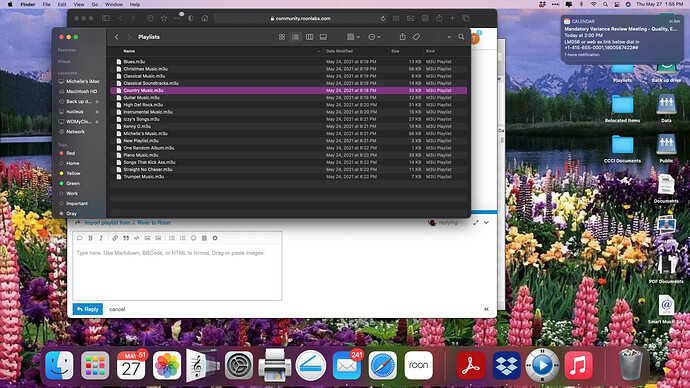 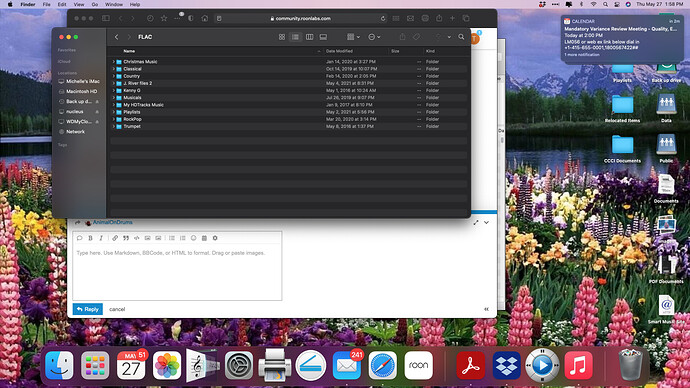 ok, thanks for posting those. No worries about your busy day. I redownloaded J.river and did a lot of research on how to do this. The first thing you are going to have to do is to export your playlists from J.River again. There are some specific settings that need to be enabled that were not enabled when you exported them originally. When you export a playlist you want to check the box for “Store paths relative to exported playlist location”. You also want to save them as M3U simple, not M3U extended. Save these playlists to /Volumes/Public/Shared Music/Shared Music 2/FLAC . Then you want to take that playlist and put it into your FLAC folder on your Nucleus. Try this with one or two playlists.

ok. I took one playlist and put it in the WD Mycloud “Flac” folder. I can see it there.

what method should I use to now put it in the nucleus?

Just drag it and drop it into the FLAC folder

ok. just did it

ok, can you find it in Roon?

And it worked! YES!!! Thanks. You are my new best friend! I owe you a beer or something. Any chance you live in Ct.?