Mostly when listening to files from the Synology NAS, I’ll get a message saying something to the effect of “Roon is having a hard time loading this file etc.”

Perhaps provide more details about your setup based on this post…

But WiFi is always cropping up when getting audio drop outs as is an under min spec system.

It’s been pretty frustrating lately. I can’t imagine it’s my admittedly temperamental wifi signal, since the streamer is hardwired to the NAS (gutted my house last year and ran several hundred feet of cat6 ethernet cable.)

This is feeling like an “under min spec” system somehow, but there are plenty of other people running this setup that aren’t having problems.

Here’s another stick in the spoke: If I use the MacBook Air and hook up a Dragonfly to the Mac and run a set of cans to listen at night, I almost never get cutout. And That’s --definitely-- using wifi.

But when I was running macbook core and NAS to a different hardwired bryston streamer into a Schiit DAC/HPA, I would get cutouts. I figured the whole point of running miles of cat6 was that this cutout stuff would be a thing of the past.

While trying to listen to a new MQA album today (Bishop Briggs “Church of Scars” highly recommend) it cut out so often I was tempted to put a few rounds of .45 acp into the rig. Yes, I’m frustrated.

Hi @Matthew_Partrick ----- Thank you for the report and sharing your feedback with us! The insight is greatly appreciated and sorry to hear of the frustrations.

Moving forward, I would like to gather some further information from you/propose the following troubleshooting exercises to see if we can try and isolate some variables here to determine where the issue may be occurring. Please see below. Thanks!

FYI: Our knowledge base has good information on how to go about troubleshooting audio dropouts which can be found here. If you have not given it a read yet, I would highly recommend it!

I will try the Thunderbolt first and see if that helps. But for the time and hassle I’m not far away from buying a Nucleus.

Eric, thanks for chiming in.

The first one is set up as “Address1” while the second one is “Address1-2Ext.” and I always wondered if that created a problem with the devices talking to each other.

The Macbook Air core with a dragonfly out to the cans rarely cuts out compared to the 2 channel system, and I am very ready to buy the nucleus if that’s going to solve the prob.

Hi @Matthew_Partrick ---- Thank you for touching base with me, the additional feedback/insight is very appreciated!

Continuing forward, It’s hard to know exactly where the problem is but my sense is, as Allan pointed out, that this behavior is being introduced during one of the mentioned wifi “hops”. If you can I would definitely recommend testing with a hardwired connection via thunderbolt to the current core machine OR trying to use another device with ethernet access as a core (temporarily) to verify what the experience is like. Trying to isolate some of these variables will definitely be the best approach here.

In regard to Nucleus. The device will certainly perform better as your Roon core, but if the the issue is occurring somewhere in your environment we should try to sort that out first to ensure that you have a flawless Roon experience

Thanks so much for the feedback. For the sake of argument, would implementing the hardwired Nucleus reduce the number of WiFi jumps? Moving my current core off the WiFi device (MacBook air) and onto the nucleus which I presume is ethernet into the network seems to cut the WiFi jumps to nil, correct?

I know I have a WiFi signal problem in my house, which is why I bought the booster; the problem is that booster has a different name and when I connect the iPhone as a remote or an android as an endpoint, it won’t work as if it’s hooked to the original network, presumably due to the different names.

Seems like Nucleus might be a reasonable solution. The MacBook Air isn’t really designed for this, and sort of falls out of spec, depending on how old it is. I’ll let you know how it turns out.

Hi @Matthew_Partrick — Thanks for getting in touch, always my pleasure to try and help.

It sounds like you may have pulled the trigger on Nucleus? If that’s so, how have things been holding up with the core running on a hardwired connection?

So sorry for the delayed reply. I’m waiting for my paycheck at the end of this month to pick up the Nucleus. Is there a diagram somewhere on the RoonLabs site as to how I would move the core to the Nucleus?

Try this page in the KB.

Eric–I’ve attached two different schematics here, one listed as #1 (Roon core on MacBook with two wifi hops) and the second with the theoretical Nucleus hardwired to the ethernet switch. I’m assuming by lessening the wifi hops and making sure I have a strong signal from Mac App will lessen the cutouts. 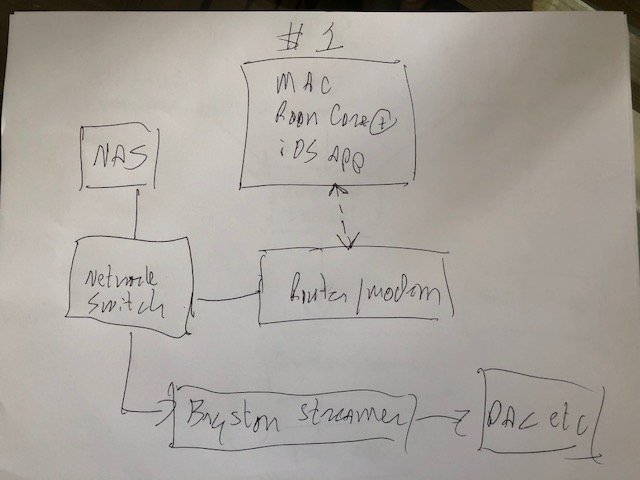 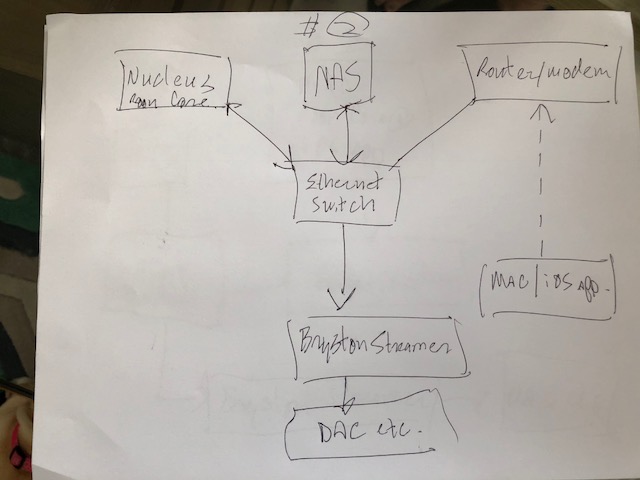 Hi @Matthew_Partrick ---- Thank you for getting in touch! Hope all has been well.

Please do forgive any confusion on my part, but if I am not mistaken the first diagram is currently what is in place, correct?

Personally speaking, I try to avoid Wifi when I can with my devices. Obviously with certain remote devices WiFi is the only option available, however when it comes to my core machine I always make sure I am communicating with my network via a hardwired connection either directly to my router or via an unmanaged switch. Just as a data point, was the proposed test with the current core (i.e thunder bolt connection) ever conducted? Curious as to what was observed.

In regard to your second schematic, this is a very similar configuration I run in my personal setup at home. The only difference is that I have a NUC w/ROCK and not a Nucleus running the show. All my various devices make use of hardwired connection while my remotes (phones mostly) communicate via WiFi, as mentioned above.

Hi, thanks for getting back to me.

Yes, the first diagram is what’s currently in place. I did use the thunderbolt connection with my current core and the cutout seemed to occur less often. The other problem that I think I’ve identified is that, as I said earlier, I have a modem/router in a closet and a network extender, which is technically another network, ie it’s named differently, so I can’t hook up my remote on the iOs to the extender and actually communicate with the core. So it may be necessary for me to move the modem/router out of the closet, which is going to require punching some holes in the walls etc.

I’m probably going to pull the trigger on the Nucleus shortly. I have about 1500 albums, maybe around 15k tracks, so I’m guessing I don’t need the Nucleus +, correct?

Thanks so much for your help.
Matthew

Hi @Matthew_Partrick ---- This is taken directly from a comment left by our COO Danny on another thread post concerning Nucleus vs the Nucleus+:

Which Nucleus should I get? Nucleus

Great, thanks! Nucleus it is. Ordered just now. Thanks again gents.

I also think I’m going to move my modem/router out of the closet and hardwire it into the AC duct behind the grate so it might get a better signal to the rest of the house. Worth a try!

Moved the WiFi router and installed the Nucleus today. No cutouts so far, running very smoothly. Thanks!