I have found two compatibility problems with iOS 11:

Swiping up from the bottom is now a central UI gesture, and it doesn’t work in Roon, for two reasons:

In addition, Roon isn’t enabled for split view multitasking. This is not a bug, and not really a central feature either. But I can see several use cases: editing metadata with a browser for getting pictures, credits etc.; reading about musicians and music while listening; reading anything else while listening; working through the mail inbox. Suchultitasking in iOS may introduce conflicts with the higher priority wish, local playback in iOS.

on my iPh6+ when you scroll up the first time you get the up tab then use that to get to the control dock…and while image below is nothing playing the same is true when something is playing in an active zone too. 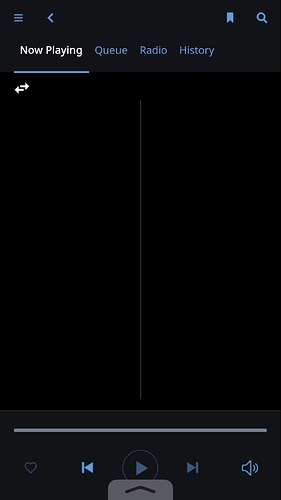 Yes, this would be really useful. I control my AV receiver via. an iPad app and so it would be good to have Roon and this app side-by-side.

on my iPh6+ when you scroll up the first time you get the up tab then use that to get to the control dock…and while image below is nothing playing the same is true when something is playing in an active zone too.

I see the same behavior on my iPad Pro, but in testing this, it was very easy to hit the progress bar, as noted by @AndersVinberg, causing the playing track to skip to a new location. Not earth shattering, but a bit more iOS 11 friendliness would be appreciated.

Ok, I see what you mean: (on my iPad) when I first drag up I get the little arrow-tab, which looks like a remnant from older versions. Then if I lift my finger, put it down again on the tab and drag, I get the normal iOS 11 behavior, first the dock and then the app switcher.

Not new to iOS 11, but very annoying nonetheless.

There have been a few times recently when I wanted to adjust the screen brightness of my iPad Pro 9.7" remote from within Roon. However, swiping up from the bottom center of the screen to pull up Control Center also grabs the track timing slider, losing my place in the currently playing track. I tried this several times to ensure it is not a simple issue of dexterity. Is there any way to make Roon properly aware of this contextual swipe, or is this a deeper issue with Mono/Xamarin?

Have you guys tried double clicking the home button while in Roon to bring up the dock or to switch apps.

Or am I missing something?

Sure, but that’s a compatibility feature for the old world. The new devices (iPhone X) don’t have a button. Preparing for the new world.

That appears to be new to iOS 11, and didn’t exist for my first report. I guess it is a new workaround. Still disappointing that the usual iOS controls aren’t fully functional in Roon.