This problem has become common since upgrading: both iPad and core are build 200.
The iPad stops displaying some images, replaces them with gray rectangles (screen capture below). On previous pages the images are ok, but as I scroll the stop appearing (this is page 3, I was here earlier). And they are missing from album pages. And it is unable to create an image for sharing, just missing.
I shut down the app (three finger drag up) and start it again, and all images immediately appear (screen capture below). No delay as we normally see when filling them in from the server, so the images were in cache.
Clearing the cache has no effect, just slows everything down when fetching, but the gray rectangles eventually appear. 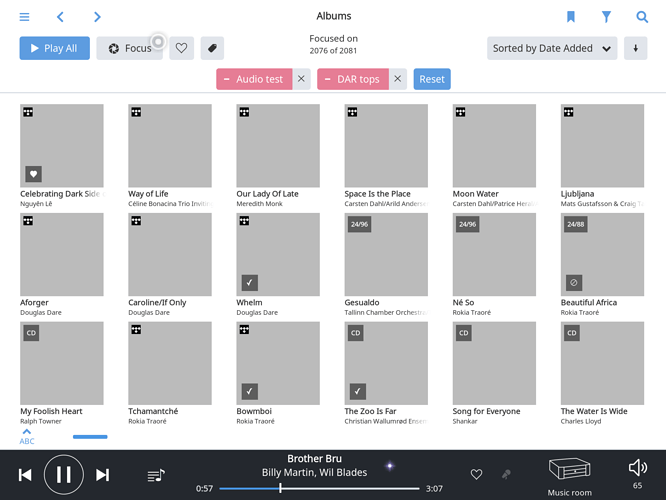 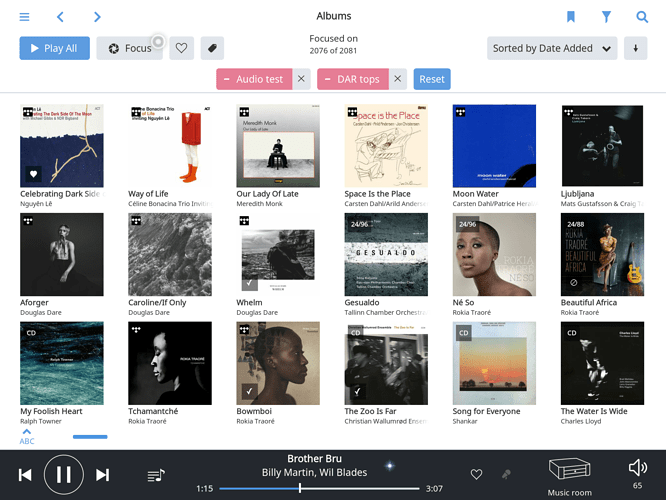 Are you still seeing this @AndersVinberg? How often?

I’d like to get a look at your logs if this is happening with any regularity. Just let me and @Eric know. Thanks!

I have experience exactly the same issue after upgrading. Clearing the cache does not help. Please let us know. Thanks

Count me, too. I had to delete and reinstall from the App Store to stem the issues for the time being.

Since the latest iPad remote build, newly added albums and those a few pages deeper in the collection have become non responsive loading images. Only the first one or two pages in Album view seem unaffected. Additionally, certain button functions and their readouts, such as Background Audio Analysis Speed, can become non responsive and frozen. Roon on Mac OS and Android remote are unaffected, so the core and other remotes still are running properly. Release a new iPad remote build with bug f…

Traveling.
Will do when I’m back home, march 2.

A similar situation for me also

Of course, if Roon were mobile so I could take it with me on vacation, I could have sent you the logs from here

All – Thank you for the feedback and sharing your observations with us. I have contacted you with instructions on how to upload logs from your remote devices to our servers so we can have a closer look into this issue.

I just upgraded the iPad to 207 (core is 208). Still have repaint problems. I cleared the cache, but I still get them. Some are a bit transient, I scroll fast and the whole page is gray boxes, scroll back and forward again and it fills in. In some cases, restarting the remote is mproves things, But the failure in the screen capture below is persistent across restarts. This is page 5 in my album browser. The Jormin album in the bottom left does have a cover image when I open the album. So I think the system thinks them image has been loaded even though it hasn’t, and that status is persistent. Seems like a race condition in the asynchronous loading logic, I think it happens more when I move quickly.

Let me know if you want to see logs (and remind me how, haven’t done that in a while). 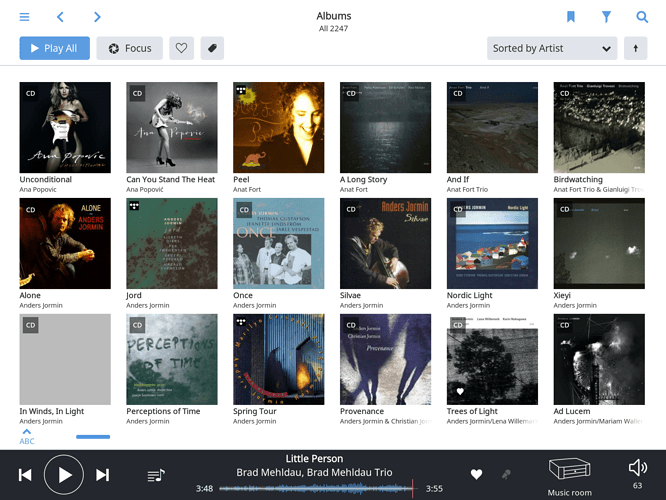 @mike I I’d an experiment: for the previous result, I had turned on Show hidden albums (for MQA investigations). I turned that off, which changed the counts do that albums appeared in different locations. I cleared the cache, restarted and browsed slowly. The same Jormin album lacks the image, even though it is not in the same place in the browser. So it looks like a status flag being corrupted, not cleared with the cache.

@mike I just noticed this problem on a Windows remote as well.

And just like on the iPad, when I cleared the cache and restarted, it was the same albums that showed up gray: 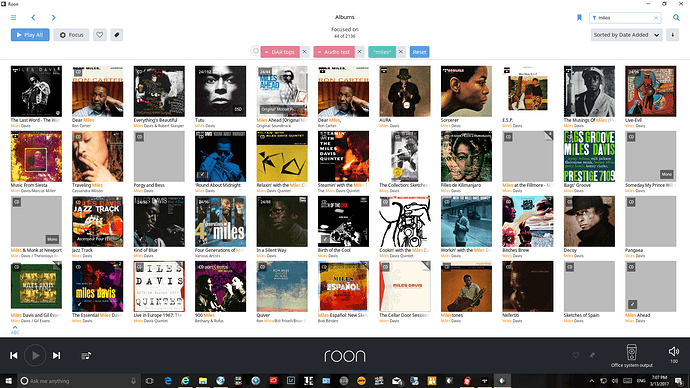 Is this happening to the same albums consistently?

Anything notable about this install or database? Was it copied, or restored, or moved, or anything like that?

Can you dump us another set of logs from the Windows machine using the ID Eric sent you?

Thanks Anders – we’re looking into this.

Yes, the same albums keep showing up gray, across restarts, across cache clearings, and as I just noticed on both iPad and Windows 10 remote.

Nothing special about the install or database.

Ok, so I did an experiment for this problem, when you asked about the other one:

Except I checked if the albums had cover art when I opened them. Always did in the past. And the still do, it just doesn’t show up in the Album browser.

EXCEPT one if them has the wrong art! Can’t say if this was do previously, don’t think so. The other ones do not, as far as I check.

Hey @AndersVinberg – sorry for the slow response here. Based on the screenshots, it looks like ~15% of your collection is affected? Is that right, or is this subset particularly bad?

I’m wondering if there’s something media specific here. Anything in common with these albums? Could you maybe zip up two or three of the albums missing cover art and send me a link to download the media? If we can reproduce with the media, that would be a big clue, obviously.

Thanks Anders – very strange issue, but we’ll get there

No, I’m showing you the bad subset. Much less, less than 1% I guess.
And note that those albums do have album art when I open them.

I can put some on Dropbox for you.