iPod Touch as a cheap endpoint

I am in the market for a cheapish endpoint for my bedroom set up – which consists of three MD products, the HD 6XX, the Grace design SDAC, and the THX 789. The missing piece of course is a streaming endpoint. Thus far, I’ve simply been plugging my iPhone to the SDAC. The sound is terrific for the price, but this set up does entail having to plug and unplug the iPhone each time.

I wondered whether there are alternatives. One possibility is the Allo USBridge. However, I’ve had one bad experience with it, in that it just failed to play with a Pro-ject DAC. In the end, I ended up returning both. I wrote to Allo asking whether the USBridge plays with the SDAC, and haven’t heard back.

And then, I thought – why not just get a basic iPod Touch, install Roon, and just hook it up permanently? At $ 300, this appears, at first glance to be a terrific solution. If I get this right, connecting the Touch to an external DAC will by-pass the internal DAC on the device.

The question is, what am I missing here? Does the iPod Touch somehow lack in bit rate and sample frequency? Would it, if only passing through to a DAC? Or is there indeed something else? Or, am I just missing the point and asking a question that has been answered earlier? Admittedly, I am just a listener, and have not a jot more than rudimentary knowledge about digital music.

I’d love a response from the cognoscenti here!

Don’t bother with the iPod Touch, Get a Bluesound Pulse Mini 2i or Pulse 2i. Not sure about them price wise in Dollars $499 and $699 I suspect. That way for a little bit more outlay you will have a more versatile end point, Apt X bluetooth ( Which with the right bluetooth headphones sounds impressive if not quite up to Hi-Fi standards ) etc or of course wired headphones. Have the Pulse first generation in my bedroom and it sounds great.

Does the iPod Touch somehow lack in bit rate and sample frequency?

Your understanding is very good. Use the USB output of the iPod Touch feeding your SDAC (via this Apple adapter) and you’ll be by-passing the iPod’s DAC (since you’re using it’s digital output) so you’re good to go!

One thing to consider before making a purchase is how long the iPod Touch will receive iOS updates. And checking what iOS versions the Roon Remote app on iOS supports.

If you already have a current iPhone or iPad then no problems, you can of course use those in the exact same way.

Thank you! Once again here you are, to the rescue, like a knight in shining armor. Thanks as always, for your help!

This also corroborates my ear – I have been quite pleasantly surprised by the quality of the sound.

As I understand it, there isn’t much difference between iPhones and iPod touches. The latest versions run the same OS, and these things support a cycle of apps for at least half a decade or more, which means that they can be dependable endpoints for the middle to long run.

I am going to wait for a month or so, as I hear rumors of a refresh in the iPod lineup.

But this raises a question – why, in the discussions of Roon endpoints, is there no serious mention of this option? It seems way easier and robust than many out there, e.g., the various Pi based options. Is it because people prefer their endpoints hardwired, rather than over wifi? If so, why exactly do they do so, when there seems to be no compelling reason in terms of quality, given the robustness of the mesh networks of today? As long as the main server unit which hosts the Roon core is plugged in directly to a router, does it matter whether the endpoint is on the same network, but just wifi?

Many thanks, Terry. My request in this instance is for a secondary network, and space and convenience matter in this context. Please see Sean’s point below about SQ also.

But this raises a question – why, in the discussions of Roon endpoints, is there no serious mention of this option? It seems way easier and robust than many out there, e.g., the various Pi based options.

Probably the expense. A Pi in a case with the stock power adapter running Ropieee makes a fine WiFi-to-USB endpoint, and costs only ~$60 – less than the cost of the iPod USB adapter alone. Add another $300 for the low-end iPod touch, and you’re basically paying for 6 Pi-based endpoints. Easier? The Pi is dead easy. More robust? Dunno, but my Pi endpoints haven’t been a problem.

Never fear, I never guess (unless I say I’m guessing and don’t know for sure).

With this one, I’ve seen and done it with my own eyes. Pretty sure I’ve shared a screenshot in the other thread before but I can take one later today or tomorrow if it helps you sleep better! Always happy to help people sleep better

But this raises a question – why, in the discussions of Roon endpoints, is there no serious mention of this option? It seems way easier and robust than many out there, e.g., the various Pi based options. Is it because people prefer their endpoints hardwired, rather than over wifi? If so, why exactly do they do so, when there seems to be no compelling reason in terms of quality, given the robustness of the mesh networks of today? As long as the main server unit which hosts the Roon core is plugged in directly to a router, does it matter whether the endpoint is on the same network, but just wifi?

It depends on the WiFi network. You’re assuming everyone has a really reliable wireless network and a mesh network. Not everyone does or wants to go spend $$$ for a mesh network. Even then, I know of people that still have issues with Roon over WiFi with a mesh network and are in the process of installing hardwire ethernet throughout… I was one of these people too.

And same for preferring a permanently powered endpoint that doesn’t need batteries being recharged the way iOS endpoints do. I guess you could have it connected to a 5Vdc charger but for bit perflect playback (no Roon DSP) is a RPi3 more cost effective?

Lots of different reasons / things to consider. There’s no straight forward ‘best solution’ in this hobby.

Everyone is different with what they’re willing to do and put up with, in terms of practicalities.

Good idea to wait if the iPod Touch makes a comeback. You can happily use your exisiting iOS devices in the mean time.

Interesting. I guess my starting point, as an iPhone user, is that I have the adapter. The Touch costs $ 199, and can be had for less, and it is basically plug and play, and definitely less expensive than many of the streamers on the market.

That said, I am curious to explore the Pi alternative with Ropieee. I had tried with the USBridge a few months ago, but even with their terrific help, we could not get it to talk to the Dac I then had. Given the amount of time that experiment took up, I got turned off by it, especially given that the cost of a USBridge is about the same as an iPod Touch.

But at $60, the proposition is indeed different. Would you please be so kind as to lmk where I can find detailed instructions – including on where I can get a board and a case? In my instance, I’ll also need a wifi module.

The price of Mesh networks has gone down. A four point Google system can be had for about $ 200 at Costco now and it is terrific.

But I am intrigued by the prospect of a $ 60 Pi endpoint and am going to experiment with it during the upcoming long weekend. As I requested Bill, I’d love a pointer on two on where to get the thing, and how to set it up.

The price of Mesh networks has gone down. A four point Google system can be had for about $ 200 at Costco now and it is terrific.

Noted. I’ve had the Google mesh system and it wasn’t as reliable as hard wired for me. Tried a couple others too.

If I were given the Google mesh system for free it still wouldn’t work for me. So the cost isn’t the only factor (for me anyway).

But I know it works well for a lot of people so different setups can behave a bit different I guess.

I do have a hardwired set up in my main system. What I am doing now is getting something going in the bedroom. Here, I do need to rely on wifi, so even if I go with a Pi based solution, I’ll need to acquire a wifi module for it.

By the way I now have a single wireless access point at my place. And never had a problem with my iPod Touch as a Roon endpoint, even with PCM768kHz streaming wirelessly…

So for my place, the multiple wireless ‘hops’ of the mesh system was (maybe) the issue. With a single wireless access point (and everything else hard wired), no issues.

But I know lots of people with great success with mesh systems, so it was just something funky with my particular setup.

WiFi is included. I bought this kit: 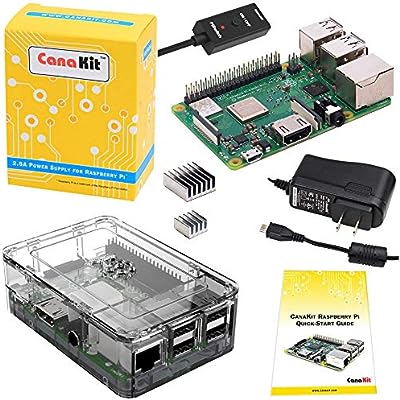 Amazon.com: CanaKit Raspberry Pi 3 B+ (B Plus) with Premium Clear Case and 2.5A Power Supply: Computers & Accessories

They call it a “kit”, but the parts snap together in about three easy steps. You’ll also need an 8GB or larger MicroSD EVO card, also available on Amazon for $4-5.

Once you have that plugged in, you connect the USB out from the Pi to the USB in of your DAC (I use a Mytek Liberty), and you’re off to the races.

Here you go. PCM768kHz and DSD256 playing flawlessly (over WiFI of course) to my iPhone, connected to my USB DAC. 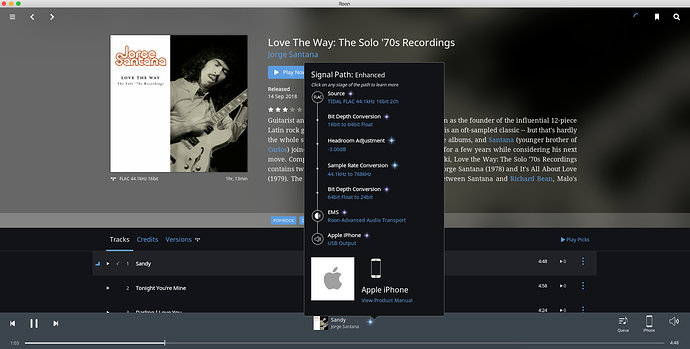 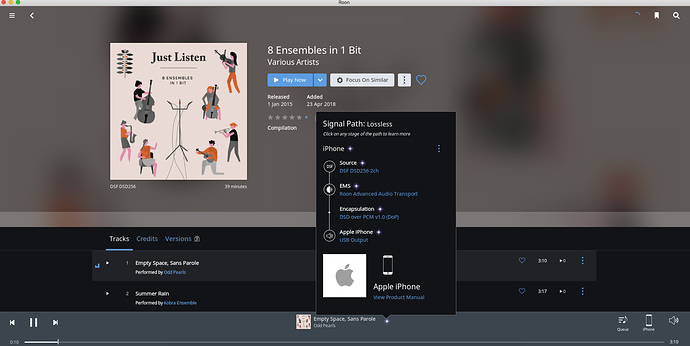 If a new iPod comes out let’s hope it’s not crippled by usb-c like the iPad Pro. Perhaps this will be fixed at some stage tho.

Oh, this is awesome! THANK YOU! I have just ordered it, and will do the experiment next weekend.

Just a quick update. As I had a free afternoon I decided to drop by Fry’s and see if they had a Pi kit. They did. I brought it home, and it took me about 45 minutes max; and it appears miraculous that this set up can work! My problem is solved, and for that, I extremely grateful to you, and to @dabassgoesboomboom.

What software/OS did you load onto the RPi3?