Is something like the Lumin U1 Mini REALLY a sound quality upgrade over say an Allo DigiOne?

I know, what a daft question! But I’ve been looking for an SPDIF streamer transport (no DAC required) that can give me an upgrade on the sound quality of the Allo DigiOne - whilst hopefully also looking considerably more like a sexy hifi component and not costing multiple thousands of £££££’s!

At the moment it’s just an idle Xmas present to myself idea and it might go away soon, so if anyone can part me from my money before December 25th that would be fun!

(seriously any streamer recommendations as an upgrade from the Raspberry Pi/HAT offerings with a great SPDIF output would be most welcome… I think I’ve trawled the interweb exhaustively but most of the popular offerings seem to be USB only). The title you chose thread says it all: difficult to know. I’ve used streamers from ~ $200 to ~$2000. Sound quality does not go up monotonically with price, and overall the differences are much less what you’d get for the same 10x price variation in DACs, amps, or headphones. For my headphone systems, I ended with Pi-based systems with the small production, superb quality S/PDIF-AES-I2S Pi2AES board with a low-cost SMPS. The total cost (it’s a DYI setup) is ~ $US250 but it is a worthy match for headphone chains costing 30x that.

I realise timing is tight, but why not try a different S/PDIF HAT to see if you hear a difference, before stepping up several $k for a possibly minuscule difference? A big advantage of RAAT it’s transparency with inexpensive endpoints… IMO you would be buying a nice box and PSU, and other features you might not need.

Thanks for sharing, but the OP isn’t looking for a DAC

I sort of think here in the UK the Allo is probably where it stops… I could go ‘signature’ but for a few hundred more I would end up with an even bigger DIY plastic case and power supplies/battery holders all over the place! I know it makes sense budget wise, but I crave being able to look at my rack and feel that ownership glow… I have looked at the Primare NP5 (as something just a bit more expensive that will probably sound the same as a Pi with SPDIF HAT but look really neat) - only Primare seem to be very vague on the Roon compatibility front? Maybe @Terry_Medalen might confirm how lovely the NP5 might be and what’s occurring with Roon compatibly?

Well put! Perhaps there’s room for a U1 mini in your rack?

Thanks for sharing, but the OP isn’t looking for a DAC

£2k is probably more than you’re wanting to pay, but it’s worth considering. I haven’t tried this standalone version but did have the platform built into the Moon 390 that i reviewed. Very nice sound wise. Better than anything else I’ve tried bar the dCS Network Bridge.

HiFi equipment rarely is sexy. Therefore I honestly suggest to go even less sexy than the Digi One. Enter the Digi One Signature with Shanti power supply. Just put these in a box, you never have to touch them anyway.

Now you can spent the money you saved on the truly amazing Denafrips Ares II R2R DAC. 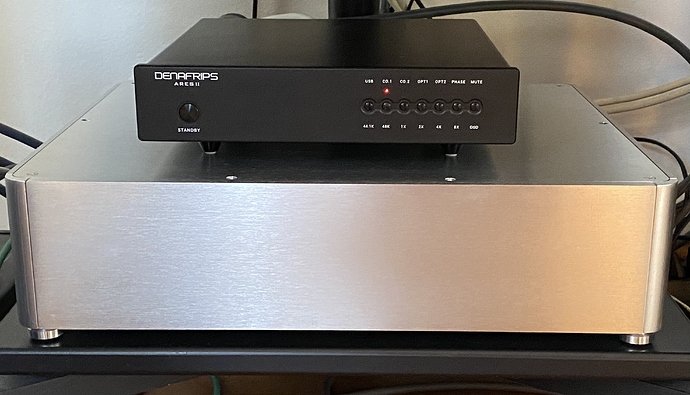 The sound quality is mainly determined by the DAC. On the other hand, the Lumin U1 mini is a good choice. On the one hand, it looks more like a hi-fi device, on the other hand, it is not only Roon tested, it can also be controlled via the very well-designed Lumin app. If you have the money and want to reward yourself, treat yourself to the Lumin as a Christmas present. It will certainly not sound worse than the Allo, but it will look a lot better

It depends on. I have my own personal attitude towards this. However, that’s not really cheap

Wow that’s a big box! Did you do what I was considering, that is separating the various boards with ribbon cable connectors and isolating them from one another in a nice container of some sort? Maybe with external connecting leads to one panel at the back (I really don’t like leads escaping for very angle on the Pi4).

And yes I took delivery of my Ares II a few weeks ago and I am enthralled…that’s what started all this upgraditis! What a shame Denafrips or Vineshine don’t distribute a cleverly designed digital streaming transport… loads of resisters and capacitors with a great big circular transformer would sell me every time!

Seriously, the quality of electronics coming out of China now is amazing, I’m a convert and the proof of the pudding as they say is the sound!

Ah yes I remember that system… that room must sound very interesting and sexy it all is (one day I intent to DIY a pair of speakers that would rival the big old Tannoys, you know, for those big orchestral climaxes - although I will need to move first!)

(PS. I know yours aren’t Tannoys - but I’d need some kind of fibreglass moulding plant to make those!

Thanks Tim, very kind of you.

I made my raspi HiFiBerry Digi+ Pro look sexier by attaching it to an official raspi display in a Smart Pi Touch 2 display case. Adds utility to an already superbly functioning digital output device. You can always spend more if you want. For me using different devices and methods of shipping bits to a DAC didn’t make any difference in sound quality in my system.

I think, that an U1 Mini looks much more sexy
than a RPI (also with a plastic covered display):

But: Do you really mean, that you’ll get better SQ with a higher priced streamer?
I don’t hear any differences in using a Lumin, SOtM, RPI,… if it’s handled through the same DAC.

It’s a strange one isn’t it, some people swear that different streamers/transports make a huge difference, some say none - even those who have both esoteric and expensive streamers AND the Pi versions! One might ask, then why keep both in your rack - or is it just for sexiness? (probably features I suppose?)

Some say USB and SPDIF is identical into their DAC, some say not, I think maybe it is the DAC that decides? Does it like this stream better than that stream? Some DACs seem to treat all streams with equanimity - but does that mean the DAC is better or simply homogenising everything put into it?

For example I had the RME ADI-2 DAC for a while, measured well, did everything a DAC should do with exemplary precision, ignored the difference between SPDIF and USB, created a common playing field. And all this it was said because it was so very good at leaving all the electrical issues at the door, sorting out the signal from the hash etc. I now have a Denafrips which is almost the polar opposite, idiocentric and organic, gets picky about USB or SPDIF, but boy compared to the RME it is alive and real! So maybe the streamer situation, the ones and zeros and how they are presented in a hifi context as opposed to a computer environment matters - to a DAC with personalty?

It’s a shame we can’t have a nice middle ground - say something around the £1k mark that is a nice piece of hifi and not a computer, so with the usual hifi outputs and not shedding all of that in favour of just the ubiquitous USB AND looking the part so it sits lovely on the rack with the other hifi?

What are you after, a transport or a DAC? The DAC makes the sound, and there you’re sorted. Any extra money for a transport will only add features you don’t need with Roon. Add a 7" display and nice case to your Pi, that’ll make it more presentable in the rack, lol.

I can see why you title yourself a dinosaur Mike!

I’ve fed my numerous DAC’s with all sorts of input and they all sound different, from an Auralic Mini USB, coax SPDIF, Toslink to an iPad endpoint though the usual Pi versions via USB to the Allo DigiOne. Anyway, to say only the DAC makes the sound is technically not even correct - nothing makes a sound except the speakers and even that isn’t a sound until my brain decodes the air particles rushing past my ears!