Is there a ROON ready portable headphone amp + DAC streamer?

I’m looking for a roon ready (wifi 5ghz) portable headphone amp + DAC streamer. Would be great to be able to move around my apartment while listening to my headphones.
I do know that Chord Mojo + Poly exists but they only works with 2.4GHz networks and they are very hard to find these days. I guess/hope there might be something new coming from chord.
But is there any other solution for a portable Roon Ready streamer with headphone amp and DAC?

Astell&Kern SP2000 has dual Wi-Fi integrated and is roon-ready.

I use a Audioquest Dragonfly Red on an ipad with a camera kit. I guess an iPhone is smaller

How about an ipod Touch, I think that should run Roon Remote?

Try a chord mojo with their poly add on.

IEMs? Easy-to-drive headphones? I use my iPhone with a Hidizs S9 with the Hidizs lightning to USB-C connector. Very clean and powerful. Balanced output. Replaced all my Dragonflies.

thanks for all the replies.

I will not use IEM but a pair of Meze Empyrean. They are not that hard to drive compared to other high-end full-sized headphone. But I do want a good amp+DAC, the Empyrean deserves it.

The Chord Mojo + Poly is not an option for me because doesn’t support 5GHz wifi networks and also it is very hard to find these days. A&K SP2000 is perhaps of intrest, but I have to find out how good an amplifier it ihas. Would like to try them since it is bit expensive. And I do not need player with “local” storage, just a portable streamer, DAC and amplifier. So hopefully there is a cheaper solution.
Audioquest Dragonfly Red, or perhaps Carbon, looks like worth checking out. Hope to try them this week. Has anyone any experience using Dragonfly + iphone/ipad with Meze Empyrean?
Any other suggestions is appreciated.

I use my Samsung S9 with an OTG-cable, a Dragonfly Cobalt and either a Sennheiser HD 800 or a Koss Porta Pro. 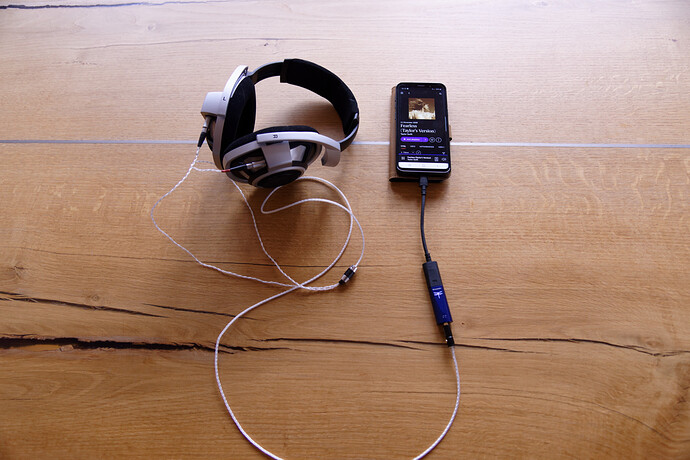 Not those phones , I use a mix of Sennheiser HD800 or Bose QC25 with the Dragonfly

The Dragonfly (Red or Cobalt but NOT Black) is man enough to drive the HD800 as @StereJo shows above.

May I ask what cable you use from the Cobalt to the Senns?

I bought the cable HERE

Thanks a lot will check it out

My Hiby R5 has an unrestricted app store and I can run the Roon app on it just fine. I’m listening to mine now. Something like the newer Hiby R3 Pro Sabre (with dual ESS ES9218P DAC chips) is even smaller and cheaper, though I don’t know for sure if it also has an open app store. Both can also be used as portable dac/amp units with, say, a laptop. The R5, and, I expect, the R3, has both balanced and single-ended outs, an ssd slot, and will run tidal, qobuz, etc, and so are also useful for very portable good quality audio, both locally stored and streamed. It runs a customized AndroidOS that, I think, doesn;t use Android’s normal audio system.

I’d wager there are lots of other solutions but most have restricted app stores that may or may not readily grant access to roon, tidal, qobuz, or whatever. 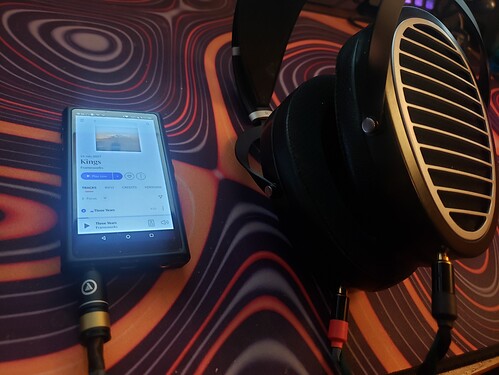 I have the R5 and use it as Roon endpoint into Balanced IEM but there is the downside of Android system resampling which Roon forces and does not ignore like most apps on these DAPS. So it does not sound as great for some sources as it could. But its a good solution. I use it whilst working ATM. It also eats the battery more than any other app though.

If you want Roon’s ability to stream high resolution or upsample, at present you have to stay away from any android based players. I have a HiBy R6 2020 and it does exactly everything that I want except allow me to use Roon’s full potential. This is Roon’s issue and not the players fault however, but I digress.

iPhones/iPads/iPod Touch’s all work great as Roon endpoints. From my experience the “best” portable option to pair with one of these iOS devices is the Luxury & Precision W2 USB DAC dongle.

The W2 (in my subjective opinion) beats the pants off the AQ Red and Cobalt. I own (have owned) both of these dongles and the sound quality of the W2 is simply superior (YMMV). There is an extensive thread over on Head-fi to find out more if you’re interested. For me, the W2 is the best audio purchase I have made for under $500 USD. Perhaps it’s only drawback is it does not do MQA, but that has not kept me from thoroughly enjoying Tidal streaming with Roon, my iPhone, and the W2.

I have a HiBy R6 2020 and it does exactly everything that I want except allow me to use Roon’s full potential. This is Roon’s issue and not the players fault however, but I digress.

Not entirely. High-res audio is not supported by Android, so each manufacturer implemented its own proprietary SDK, and it would be unreasonable to expect Roon to support them, since none has any serious market share.

A bigger issue is the lack of offline/mobile/car audio support in Roon.

You have your opinion, I have mine.

The HiBy R3 (and R2) have limited-functionality (but totally usable IMHO) Tidal and Qobuz apps. No Roon app. I think the OS is based on Linux, so no Android app store or sideloading.

Yeah - my impression was that since they didn’t mention an open app store in the marketing materials, I assume they probably don’t, whereas it was part of the pitch for the original R5 and probably the main deciding factor in picking it over other comparable options.

Hopefully this weekend I’ll get my Pi stuff built and try that out with my ifi Hipdac, which is a lovely little device, meant to be either strapped to your phone with a rubber band, to act as a dac/amp for it via OTG cable (it has its own internal battery to avoid sucking the phone dry, but can also run direct on usb power) or a portable desktop dac/amp for use with, say, a laptop on the go. It’s also adorable and looks like a hip flask (presumably the reason for the name) and the knob is quite satisfying.

I admit that, based on my UD-501, I am a fan of Burr-Brown based DACs in general, and this is a cute little bb one.

Trendy tunes on the go. Our mini DAC/headphone amplifier, the hip-dac, can go with you wherever you go. Improved music on the move. Looks great. Sounds even better.

Not quite they use this at an OS level so if the app just goes with not resampling and leaves it up to the os to decide they just work. On the Hiby for instance there are no special apps needed, qobiz, tidal, bubbleupnp infact most apps just work and dont resample they are not special Hiby apps just the normal ones of the appstore. Roon and Plex both resample under the hood and decide on a different path its this app choice that stops it working on DAPs like other apps.