Is there a way to display personal ratings, vs. editorial?

Roon makes provisions for entering personal album ratings, but it appears only the editorial ratings (stars) can be displayed in the UI. Is there a way of changing that? It would be very convenient, while browsing albums to see what I thought about them…
Also, it would be great to be able to sort by rating.
Thanks.

What version of UI are you using? I’m using Mac OSX and iPad versions and the star rating is displayed correctly for me.

Your ratings will show blue and editorial will be white. I changed an album to 5 stars and when I display the album, the 5 blue stars showed.

Regarding sorting, I can’t see a way to do this. You could post a request under Feature Request forum.

You can Focus using star rating.

I should have been clearer - I was referring to the 1.2/142 UI on an iPhone , and specifically at the ratings displayed at the top level genres/album thumbnail view. (Oddly, the Mac UI version 1.2 does not seem to display ratings in this genres/albums thumbnails view).
On closer examination, I see that this behavior is inconsistent. Some of the albums do show the blue personal rating, but others do not and display the editorial rating (in black in my UI), even though there is a personal rating - which I can see when I click through the album thumbnail …

Here you go. The personal setting is 3 stars, but that does not appear at the higher levels. 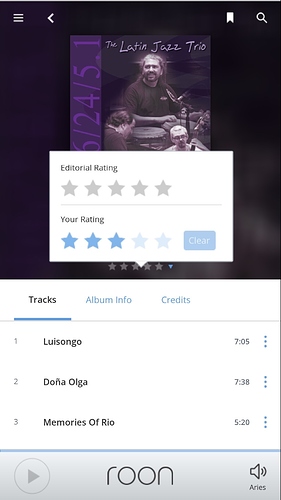 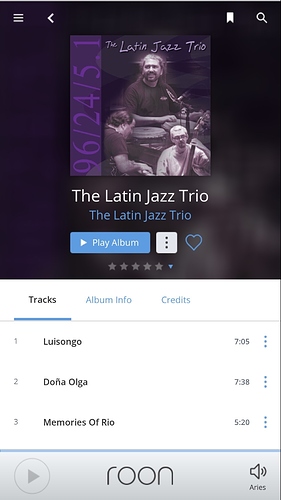 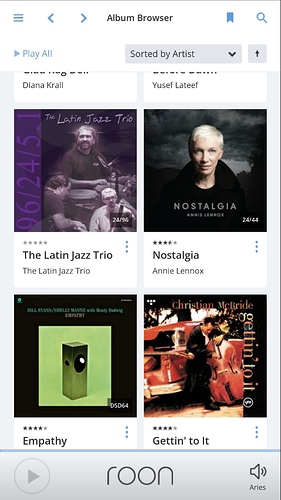 It doesn’t look like you have access to the clear button either. Can you confirm that you can either clear or change the star rating with the iPhone? I can confirm the it works on Android and my iPad.

I don’t have the iPhone to try. Let’s flag @eric or @vova and see if they can reproduce this issue.

Well, this is confusing. I have just re-entered the rating for this album, and now it does show up at the higher levels. Somehow, the first effort ‘doesn’t take’, but the repeat does. Not sure what’s going on, but at lest now I know how to accomplish what I need (persistence!). Thanks for your help.

Glad you got it sorted.

It’s seems that there is a bug in the mobile apps. I see it with the android too.

I added my own star rating to an album and it worked fine. However, I then went into the rating for that album and hit Clear, it didn’t clear my blue stars. My star rating looks like it is still valid, just like your first screenshot.

However, I can see that it cleared my rating that displays below the album cover. So, the feature works, it’s just the Clear button should completely remove my blue stars.

Anyway @VladS, thanks for finding the bug. I will put in a ticket to have the developers fix it.

A post was split to a new topic: Is it possible to see ratings on Album browser?