I recently moved Roonserver and my library across to a dedicated PC having run it to date on a Mac. Overall it was reasonably successful, although the whole process does tend to require quite a bit of cleaning up afterwards, especially playlists where they appear to lose track of the original file.

However, that’s not the issue. I had some albums that ended up with orphaned tracks for whatever reason, and when I merge some of these back together, the tracks suddenly ‘jump’ in to another, totally unrelated album. See the attached image showing tracks from two albums suddenly lumped together.

The music files themselves are still sitting happily in their respective folders and if you select a track and look at the track info, it’s still showing the correct path, so it’s clearly Roon getting confused. 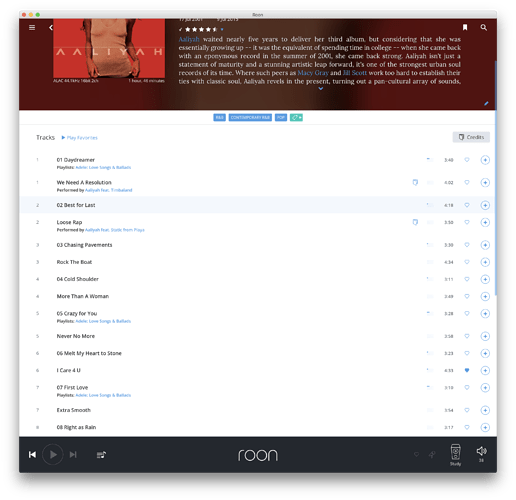 This sounds like a known bug which will be fixed in 1.2.

It was an invidious bug to track down. Brian killed it in the end and it seems to be associated with restarting a Remote.

As a workaround, until 1.2 is released, if you want to ensure that a merge doesn’t end up like Jeff Goldblum in “The Fly” then I’ve found that restarting the Core before each merge avoids the issue.

Painful, but hopefully it will all be fixed pretty soon.

Thanks Andy, that’s now three issues that will be (hopefully) resolved in 1.2 that I am suffering from. It can’t come soon enough.

I think I’ll focus on playing music for the moment and not editing my collection at all.

This is fixed now. Thanks for the report!

Thanks Brian. 1.2 proving excellent so far. Looking forward to those Playlist changes next!