It will come out soon enough. Thanks for the info.

I was thinking about a Muso. I get a decent corporate discount at one at the Apple store. Roon integration could put me over the top.

The Muso does AirPlay, do you use Roon via that currently?

they’re a fairly close copy of the Target MR60s

They do look very similar in pictures, and countless other companies have made stands based on the same rough prescription.

I have both the Pangea stands and the Target MR stands. The Target stands are used with my LS50s and the Pangea with HT rear surrounds. When you assemble them, the differences become clear very quickly, and it’s a familiar story:

Materials - the steel used by Target is a heavier gauge. The top and base plates don’t ring in the slightest with a knuckle tap

Mas loading - I loaded both pairs with kiln dried sand. The Pangea stands required me to do this twice, the second time after installing DIY gaskets between the posts and plates to prevent sand trickling out.

If you’re on a budget or don’t feel that stands are especially important, the Pangea stands are an inexpensive way to get a four column stand that’s very heavy when mass loaded.

Back in the land of small rooms where the stand mount (bookshelf) speaker was all that most folks considered when I first became interested in HiFi, it was common to see reviews of speaker stands and treatise on the importance of quality support. It’s something that has stuck with me.

Bottom line: quality speaker stands are likely to stay with you far, far longer than the speakers they’re initially purchased to support and you never regret buying quality.

the Naim Muso units will finally become Roon endpoints sometime over the next year.

I hope this extends to the entire Naim portfolio. it would be a pretty big deal for Roon’s penetration of the broader UK market.

Will the Roon + LS50 Wireless be as good sound quality as you get with a RAAT endpoint? As i understand it may not be a totalt RAAT endpoint but something in between?

Looking for new speakers, and its important for me that it supports Roon at the best it can be.

One other thing that was pretty cool, at least for me, is seeing that the Naim Muso units will finally become Roon endpoints sometime over the next year

Is this Roon doing it à la their Devialet implementation or Naim becoming a RAAT endpoint?

I’m on my third set of stands and have been satisfied with these for looks, stability, and the sound deadening on top. They are also fillable which I haven’t done yet and the slightly glossy black matches up well with my black Kef’s.

Added Amazon link so you can see the reviews. 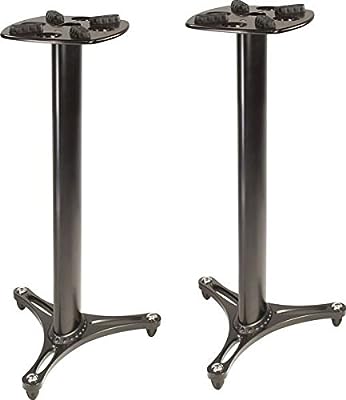 they’re a fairly close copy of the Target MR60s

They do look very similar in pictures, and countless other companies have made stands based on the same rough prescription.

Thanks for sharing your experience. I hadn’t seen such a comparison, just a few mentions that they are supposed to be copies. Visually I could tell the top plate was thinner but otherwise I was unsure of what else was different.

One thing I will say, and this is just a basic observation being new to speaker stands - when I put the LS50s on top of the empty stands I could feel the vibrations in the posts, but nothing in the top/bottom plates. The top plate seemed well dampened from the speaker itself being a mass coupled to it w/ the rubber feet. With the litter it at least feels to me very dead everywhere and I did notice the focusing of the lower frequencies once dampened.

I do hear you on fit/finish and esp. buying something as a long term investment, but 1) I question if there is a performance improvement and 2) I wonder if any of this is noticeable unless one is looking for it (ie. to a casual observer that would visit your listening room, would the difference in quality be visably apparent?). I do agree the cost difference in the scheme of all things audio is relatively minor, personally I set an upper limit of $300 and this is the best I could find from mass/volume perspective.

I mentioned here that after 8 months my right speaker started sounding staticky and also the three middle lights blinked off and on continuously. Kef said send them in and they will send new ones. They arrived Thursday from California to Kef in NJ after a very expensive shipping cost on my part and they said my new ones should ship out Monday. I’ll keep status updated here for those who might have a similar experience.
I recommend you keep your original boxes. They asked if I had mine to ship them in else they would have to send me a box which would make everything take a lot longer.

My new pair is on the way back to me too. Same problem as yours. Should be here Monday.

One other thing that was pretty cool, at least for me, is seeing that the Naim Muso units will finally become Roon endpoints sometime over the next year

Is this Roon doing it à la their Devialet implementation or Naim becoming a RAAT endpoint?

Sorry, they didn’t really shed any light on how this is being achieved. I think it may be coming from a firmware update down the pike from Naim.

the Naim Muso units will finally become Roon endpoints sometime over the next year.

I hope this extends to the entire Naim portfolio. it would be a pretty big deal for Roon’s penetration of the broader UK market.

I regret not taking photos of the Roon booth. It was mostly just a bunch of products they’re integrating with, and it was bigger than I would have expected (~1000 sqft or so).

Hopefully they know what is causing this and have fixed it in current models. They didn’t even question it. Just said I would get brand new ones.
I’m assuming i get only there remaining four months warranty on the new ones and they didn’t answer when i asked what happened to the warranty on the replacements.

It’s pretty unfortunate on the whole considering the complexity of the device and the short warranty. Also I feel making the consumer pay shipping on warranty repairs where the manufacturer is fully liable should be illegal.

Hopefully if this ends up being some broader issue they have a recall program or at least have a reasonable cost solution for those out of warranty. I bought mine used so…

What are the best/most active threads on the LS50W? The larger threads I’ve found don’t seem to be so active nowadays (ie. Computer Audiophile).

These things are heavy so shipping is around $100.
As much as I like them I have considered selling the new ones when they arrive and going back to passive speakers.
Kef also doesn’t reply to a lot of questions or support e-mails. Just no reply. Or they answer some questions and ignore others.

Here is one thread that isn’t super active.

The Wilsons are better. :agree: But I still really enjoy the LS50s.

Totally appreciate that sentiment, it sucks when there is a superlative product on the market with lackluster support, really puts the consumer in a pickle. I’m just hoping that if there ends up being widespread issues Kef’s hand is forced by the ensuing PR disaster.

At the end of the day, I look at things like this from a cost/benefit perspective - if they’re as good as say a $5k system, what is the actual cost in repairs and frustration over a lifetime of use? I’m prepared to eat some $1k out of pocket to fix any issues if I get at least 5 good years out of them. Although I wouldn’t be happy about it, I’d probably still feel like I got good value from them.

One other option worth considering is something like SquareTrade?

It will come out soon enough. Thanks for the info.

I was thinking about a Muso. I get a decent corporate discount at one at the Apple store. Roon integration could put me over the top.

The Muso does AirPlay, do you use Roon via that currently?

Yep, I use Airplay w/ the Muso, and it interfaces really well that way - wakes up quickly from sleep and responds to commands and song changes like a regular RAAT endpoint. It’s a nice system for what it is and room correction w/ Roon’s convolution filter takes it from being a nice lifestyle system to something that is more entry level hifi. I got mine when the new street price was $1199, lately it’s been back to $1399 which I feel is too high. Used in mint condition they go for ~$900 which is a no-brainer if you have the need for something like this.

And you will find Naim much better with their support than what has been said of KEF on this thread. They prefer direct contact rather than through their forum though unlike Roon.

I was wondering how their support is. Good to know.