I have roon core running on Windows which, as a certified Linux engineer is not my preferred choice but alas

- I need other things that require windows as well.

primarily I use my phone to control playback.

What I can’t seem to find out is whether there is a remote client, like a web interface that I can open when I am behind my pc?

I dont have a phone integrated in my hand like some do and I tend to forget it lying around. I hate it when I have to get up to find my phone to pause, skip, start or stop.

Only RoonServer (non-gui) and RoonBridge have Linux installs. There is no GUI Roon client for Linux.

I would suggest, running RoonServer on a Linux box and then run Roon as a client on the Windows PC, and phone.

Thanks for the fast reply, appreciate it!

I’m not sure I understand.

I probably should explain my situation better.

I have a NUC with Windows hooked up to my USB DAC, which outputs to my amp + speakers. Its headless, no display or keyboard/mouse. When I need to, I open remote desktop to access it. It has Roon installed for WIndows. I dont have it open to control Roon (and I wouldn’t want to).

Theres a server running Linux with all the music stored on it. It has shares for Linux (NFS) and Windows through Samba. the NUC has a drive mapping to the Samba share to access the music files.

I run the roonbridge on my PC and laptop. These can playback through their local sound devices.

Currently the phone controls it all, it sees the audio devices on the NUC, PC and laptop.

I tried running RoonServer on my Linux Server, I thought that was a good idea as it would have the music library local. However, while the phone could see the Core on my server, it failed to see audio devices from any of the roon bridges.

But even if I could make that work, I fail to see how having that situation working would help me controlling music playback when I left my phone lying somewhere in the house?

I hope that explains it a little better. Thanks again!

However, while the phone could see the Core on my server, it failed to see audio devices from any of the roon bridges.

Did you look at the Firewall permissions on those machines. The Core will query the endpoints for a list of attached devices, if anything breaks this communication, Windows Firewall being one of them, then the audio devices are not created. There can be other reasons, but, this is the most common. Other causes can includes having a VPN on the same machine active, etc.

As for Linux, you can run Wine, or run Roon client in a VM on the Linux machine. As I mentioned, there is no GUI client for Linux. If you get Extensions up and running, I think there is a minimal Web interface extension for starting/stopping/pausing playback; but, certainly not a full Roon experience.
(btw, fellow user here).

Awesome. I didn’t know about extensions.

I got RoonServer running on my server again and the first RoonBridge (my PC) is working. I have no idea what was wrong the first time.

I also have the roon-web-controller running on my PC. Its not very fancy but at least I can start/stop/pause playback. For now I need to start it manually but it isn’t too hard to make it autostart.

You can install the Windows remote app of Roon in Wine.

Sorry to necropost. I also have this requirement, but I have Roon control working on Linux using Wine. The key is to create a unique Wine instance just for Roon. Create the Wine instance, I create a 32 bit instance, I can no longer recall why but haven’t changed it as it works (note WinRoon is the directory name I choose, its not overly important) env WINEPREFIX=/home/alan/WinRoon WINEARCH=win32 wine wineboot Set the Window version to Win7 env WINEPREFIX=/home/alan/WinRoon winecfg Instal…

Note that at least some users are currently affected by this, but it nevertheless works:

Immediately after updating to 903 I started having this (Ubuntu 21.10, Roon 32-bit in a separate 32-bit wine-prefix), no change after rebooting everything. Is it just me? [image]

Linux Roon Control GUI Please [not on roadmap, you may try to use Wine] Feature Suggestions

Any chance we can have Roon control in Linux anytime soon? I have roon server on a linux computer (works flawless) working togheter with Hqplayer (nothing left to be desired)… Remote control on my older Ipad is not possible…so I have to use my android phone (not very practical) or a windows tablet and a windows laptop running windows 10… Only for the remote I have windows 10…would prefer to do this on a Linux machine… I would appreciate your effort on this…

And @I_Love_Vinyl, apart from the current CPU load issue it works perfectly. There is an installation script by spockfish which makes installation a breeze. See the first thread in my previous post and/or 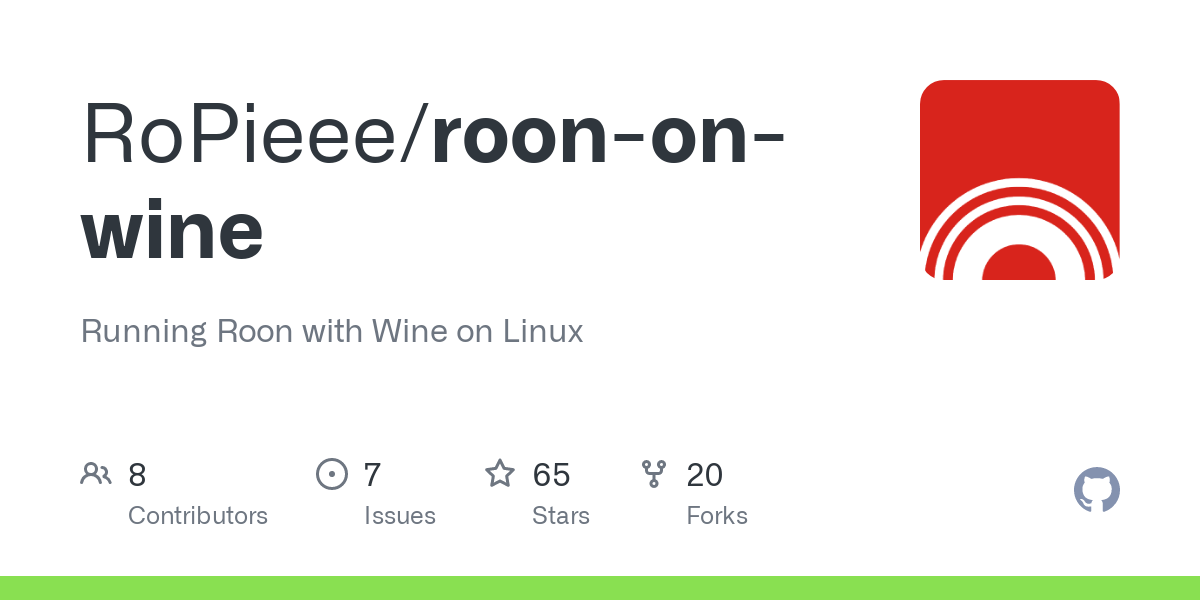 Running Roon with Wine on Linux. Contribute to RoPieee/roon-on-wine development by creating an account on GitHub.

I got RoonServer running on my server again

Currently, Roon can also be bottled. If you don’t like the terminal, you can get it under Ubuntu or Arch in different versions.

I like the flexible selection of the startup environment and parameters, which can even be kept versioned without the terminal.

I always like to use roonserver instead of roonbrigde. So I can quickly switch to the second device with server function in case of a device problem and not only have the bridge to the server.

Currently, Roon can also be bottled.

What are the advantages/disadvantages of this vs Wine?

Bottles seems to be a GUI to manage many installations of Wine version/variants and application environments connected to them (independent of a users Linux distribution). If you just want to run Roon, this seems to be overkill. If someone needs to run many versions/variants of Wine for different windows software and/or regularly wants to test software with different versions/variants of Wine, Bottles may be a comfortable GUI to help manage this tasks. The included sharing feature may also come …

What are the advantages/disadvantages of this vs Wine?

For experienced Linuxers with good system and terminal knowledge it offers no advantages. They are so nimble with their inputs, no graphical interface can keep up.

The frequency of requests for failed installations suggests that not everyone reads and tries out terminal much. With a nice graphical selection, modern people keep systems and programs running even with little knowledge. Very experienced Linux may want to control the Roonplayer only in the terminal.

Here is a small picture selection of what is possible: 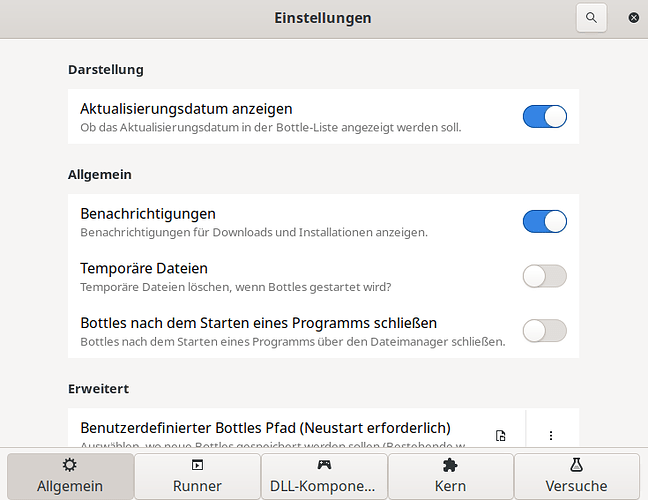 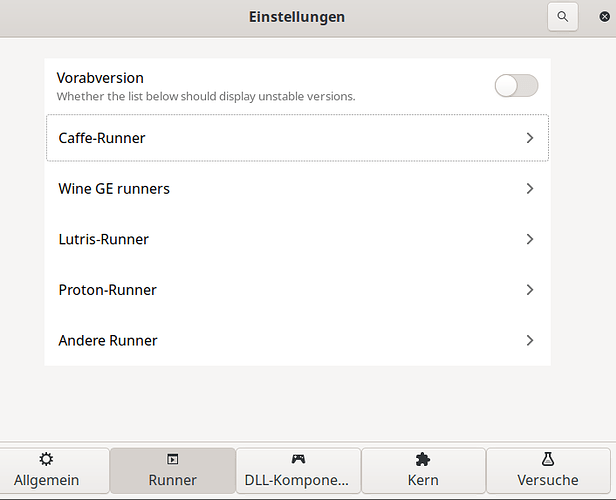 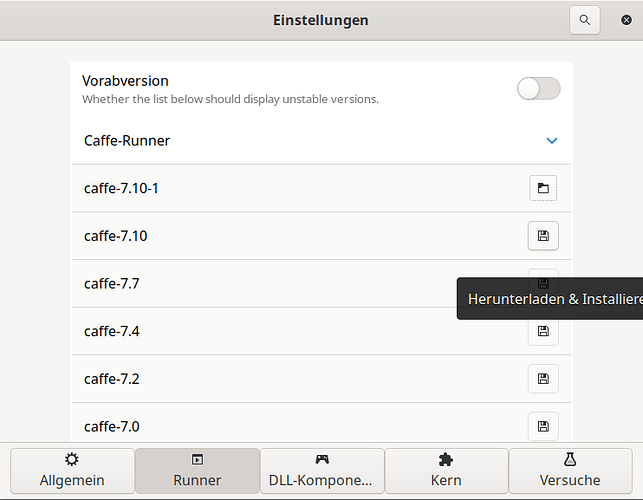 the same possibilities for all dotnet or other alternative versions… 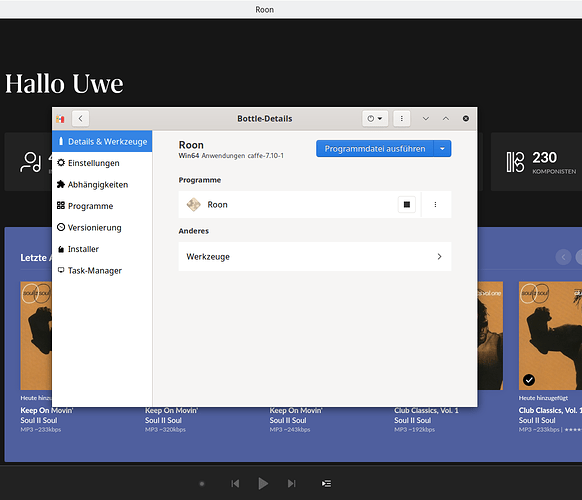 If you use Flatpak, you get it a bit more cluttered. The sandbox there has its price at speed.

Hijacking my own thread back to what it was about.

Currently having trouble with 1 roonbridge not being visible as an output.

The situation:
Server: Arch Linux headless and no audio devices running RoonServer with local library.
MediaCenter PC: Windows 10 headless with USB DAC and ASIO drivers in the living room running Roon for Windows. I can manage it with remote desktop.
Laptop: Arch Linux with roonbridge. It has a USB soundcard working in xfce4. All applications are able to play locally.

I have temporarily disabled all firewalls, Windows 10 has it disabled too.

I tend to control Roon from the phone, but Roon on Windows via RDP does not show the laptop roonbridge. I cannot configure the audio device under settings/audio.

A couple of posts above hinted at this situation and I believe it should be possible but I have no idea where to look or even how to troublehoot this. Does roon even have log files, a debug mode?

Any help is appreciated!

Well, the first thing is to: Reboot the router, the core, and the clients.

Thanks but that doesn’t help.

Roon even has documentation. It can be found here. From the knowledge base:

Occasionally, Roon Support will need to have a look at your logs or database. The instructions below will walk you through finding various folders that we might need to look into your issue. In most cases, you'll want to look at the machine running...

How did you install Roon Bridge? Following the instructions found in the install documentation? In case you want to check:

Overview Two packages are available for Linux: Roon Bridge and Roon Server. There is no real purpose to running Roon Server and Roon Bridge on the same machine, since both provide identical access to audio devices. That said, doing so should not...

Note: I don’t know Arch Linux. Does it provide ALSA support (read the “Dependencies” section in the document above)?

I tend to control Roon from the phone, but Roon on Windows via RDP does not show the laptop roonbridge.

Means what? The bridge is visible when you use the phone, but not on Windows?

Roon even has documentation. It can be found here. From the knowledge base:

Thanks. I did read (some of) the documentation. I guess I should go there more often.

How did you install Roon Bridge? Following the instructions found in the install documentation? In case you want to check:

Note: I don’t know Arch Linux. Does it provide ALSA support (read the “Dependencies” section in the document above)?

Newer distribitions use something called pipewire. With the proper libraries and plugins installed its fully backwards compatible with Pulse, Jack, OSS and ALSA (and does a much better job too if you ask me). it supports hw devices in ALSA for unmixed, dedicated and bitperfect playback.

When I tested RoonServer and my mediacenter ran Arch Linux, everything worked fine and I did not have the issue I have now with my laptop not being visible. In earlier posts I explained why I wanted to change things around, and it was said this setup should work too.

I tend to control Roon from the phone, but Roon on Windows via RDP does not show the laptop roonbridge.

Means what? The bridge is visible when you use the phone, but not on Windows?
[/quote]

Meaning, I use Roon on the phone to control things. I can also use Remote Desktop to the Windows PC and use the Roon interface there.

In any case, the sound device on the Laptop running RoonBridge, is not available to enable. However, from the logging which I now found I can see:

On Roon for Windows or my phone, I only see The Windows PC, the phone speaker and a Chromecast in one of the bedrooms. The device you see above is not visible.

Then I would suggest you take a look at the logs (RAATServer logs mainly, I guess) on the laptop. You can also look at the logs on the server, but they probably won’t show much. Additionally the system logs of your laptop and/or server may also contain information (blocked connections, blocked access to network devices, inability to use ports, …).

Its fixed. I had stopped the firewall on the laptop, not disabled it. After reboots I never bothered to check again because I asumed it was disabled. It was blocking port 9200.

Logs can be very helpful ;).