Looking at upgrade for headphone amp

Hi
I am looking for suggestions to upgrade my set up for headphone use.

I currently run Sonictransporter, ultrarendu, Oppo Sonica DAC and Burson Soloist Mk2. Main headphones are Focal Utopia, occasional use Elear and Mark Lawson modded Denon D5000. I also use the Questyle QP2R with Utopia’s which I really like.
I am thinking of upgrading the Burson headphone amp and am thinking about the Micro Zolt M2 or 3. I like the details of the Utopia and wouldn’t want to loose that with a very colored amp.
Any opinions or guidance would be helpful to maximize performance of the Utopia’s.
I am thinking about spending $1K - $4K max.
Thanks,

Take at look at the amps and sound family of tubed headphone amps. I own a Kenzie, and a Kenzie Encore. ZMF Pendant is also made by ampsandsound.

Our headphone amplifiers are the truest expression of our mission to bring tested designs and minimalist values to personal audio. We have chosen to utilize only single-ended, zero feedback tube designs to bring back warmth and musicality to personal...

IN STOCK Pendant: an artistic and musical component intended to match and complement. The ZMF Pendant perfectly matches any ZMF Headphone or other musical device that can be worn on the head. ZMF Pendant. The only tube amp you’d ever need for...

Also take a look at headamp GSX-mini solid state. Excellent build around $2K. I have one of the first production models.

Built using a special variation of the GS-X mk2 discrete Class A amplifier by Kevin Gilmore, the new GS-X mini is the first HeadAmp amp to deliver balanced headphone drive from all audio sources, single-ended, or balanced. A desktop-friendly design...

Thanks Robert.
I will check them out. To be honest I don’t really know where to start. I need to get out and take my headphones and listen to some. I have never owned a tube amp.
I am so pleased with the separation and balance of the Utopia, but you know the way it goes when you think you are missing something. I would like something that opens them up even more but doesn’t color the sound too much.

Tubed amps are nice. If you decide to go with tubes, research the types of tubes used, costs for the tubes, and availability. Both of my tubed amps uses the same tubes and are relatively cheap. Schiit Audio makes some inexpensive headphone amps, and they are good quality.

Take a serious look at the headamp GSX-mini. headamp just started distributing it toward the end of last year. Some good reviews on headfi.org. They come in some cool colors. Mine is Satin Grey.

I have written about my experiences here:

How I revised a long-held belief Roon Software

(Fair warning: another long, philosophizing piece.) In the 80s, I became convinced that the front and back ends of the chain were the most difficult to get right, and therefore the most important to focus on and invest in: the transducers that convert between mechanical and electrical energy, the cartridge (and its supporting arm and turntable) at the input end, and the speakers (and their interaction with the room) at the output end. And consequently, I felt that the all-electronic chain in-…

How I revised a long held belief, part 2: Chord and Hifiman Audio Products

I have previously written about changing my views on the impact of a good headphone amp, and the THX AAA 789 and later the Benchmark HPA4 (with DAC3B). But I needed to set up two rooms. I was happy with the Benchmark stack and could have replicated that, but in the interest of science I decided to try another system. Chord gets most attention for their DACs, but Rob Watts also has an interesting perspective on driving headphones: he wants to minimize the number of active stages and the parts…

Hello, Paul. Have been going through the same process of looking for an upgrade in headphone amp. I have been testing out the new Sparkos Labs Aries. It’s their first boxed product so that’s always an issue but the reviews were glowing (I know that’s not really a reliable factor) so I took a chance and so far am mightily impressed with the results. It only has an unbalanced out but power-wise it will be more than adequate for the Utopias and I have found the reward factor correlates increasingly with the quality of the headphones (mine are not as fancy as yours unfortunately, but the amp is giving me upgraditis in cans). I have the full version with the balanced inputs but use the rca connection as that is what the designer, Andrew, recommends (I wanted the base model but the dealer in the UK only had the full version and with all the current complications we came to a deal). I understand you get a 30 day risk free trial at home in the US and I really like that you can interact with the designer directly and he responds promptly and very directly. Details on https://sparkoslabs.com/aries-headphone-amplifier-and-preamp/ and good luck and have fun in your search. I believe Moon audio sells them in the US although Andrew can most likely organise things directly.

Thanks, I will check that one out. I think I need to go and hear a few options and decide if I want a better solid state amp or move towards a tube.

I think the Utopia sounds fantastic with some nice tubes. I run mine with a Woo Audio 22 and WE421a, mullard ecc35, and WE422a tubes.

I was thinking that tube amps look so cool.
But the little THX AAA 789 sounds wonderful.
I was thinking of getting a big Woo tube amp, hide the tiny 789 behind it, and with artful arrangement of cables it would look like I was listening to a tube amp…

I have the Focal Clear and have spent time with the Utopia. For my ears, I’d pair the Utopia with a warmer sounding amp, to counter the bit of mid treble bite.

This would be either the Violectric 281 or a Woo WA5. I own the WA22 as well as the WA5 and while both are wonderful the WA5 makes every headphone I own sound amazing, and the WA22 really needs a fully balanced source and balanced cables throughout to sound its best plus the use of NOS tubes.

Don’t shy away from tube amps if you haven’t used them before - quite wonderful and you’ll hear some sounds that make you wonder why you waited so long to try them.

I will throw the SPL Phonitor xe (or x if you also want line outs) in the ring. I’ve had mine for a couple weeks now, and been very pleased with it.

Finally took a vanity photo of my new office headphone rig… [IMG_20200526_105541] RPi4 (2GB RAM model, which is overkill for RoPieee, but the 1GB was out of stock) Official RPi 4 power supply Official RPi 7" touchscreen display SmartPi Touch 2 case for the display + RPi Flirc.tv IR remote SPL Phonitor xe with integrated DAC (My primary headphones are the Focal Stellia, to which you can see their balanced cable connected here.) I installed the fan that came with the Touch 2 case, connected …

My favorite solid-state headphone amp is the Vioelectric v281. The reasons is it’s warmer sound signature that other solid state amps without losing the benefits of being a solid state amp. It uses the best parts, including a 256 step relay based volume control with a remote control. If you are interested in that, they also have a new model coming out next month called the v590. Here is a picture of the v590. 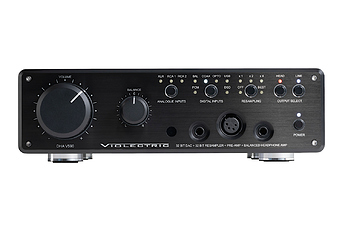 Another interesting amp that was recently sent to me is the Pathos Aurium tube hybrid amp. Similar to what Schiit audio does, but higher end without costing a fortune. I have been tube rolling with it the past couple of weeks and I am loving this thing. It’s a perfect combination of Tube coloring the sound, but it has MOSFET output stage like a solid state. Here are some pictures of it: 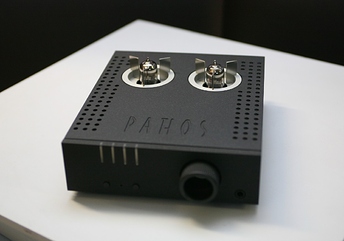 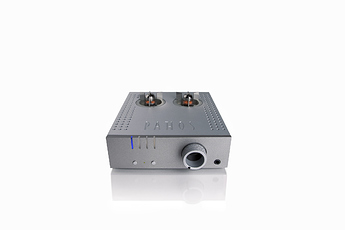 Wow so many options. I need to try and listen to some of them once we get off the lockdown.
Thank you all.

I just got a new Burson Conductor 3XP and am very happy with it. Using it as my desktop headphone setup to a MacBook Pro. My mobile config includes the Chord Mojo and the Burson betters it to my ears.

About Burson Burson Audio is challenging the conventional and pushing the boundaries of audio excellence through innovation. A decade ago, we argued against using IC opamps on the audio signal path. Today, our discrete audio opamps are industry...

Yes I love my Burson and have had it over two years. It is a nicely balanced unit and quite revealing with the Utopia. I thought it would be nice to have something a little different and smoother (since I like the sound of my QP2R). Hence looking at the Zolt MZ3 tube amp. It will be a while before I can get to that level of spending but I am hoping that will be it:)

Benchmark HPA4 is really transparent, if you really want to keep your Oppo DAC.

But I would recommend you demo Chord Hugo2 and Hugo TT2 also, for a combo DAC & Amp.

They both drive Utopia (and the entire Focal lineup) with ease.

I highly recommend the RME-ADI-2, I’m blown away by how good it is.