Streaming audio to an NAD C658 pre-amp/streamer/DAC which is connected to the same network via Ethernet.

I moved my Roon Core to my MacBook Pro to use Roon while at a seasonal residence. I modified my MacBook Pro to never go to sleep, keep the monitor on for an hour, no screen saver, no notifications. In essence, I set up the MacBook Pro similar to the way I have set up my MacMini, which has been used as a dedicated music server, running Roon with virtually no problems.

The MacBook Pro will suddenly have its screen go black, even though I’ve set screen to stay on for an hour, the log on screen will appear, I will log back in and Roon will no longer be running. I run my MacMini headless, so have assumed the screen has something to do with the problem. Interestingly, the problem does not occur when I am using the MacBook Pro for other tasks, like preparing this request for help, so resource use is not an issue. The MacBook Pro has a quad-core I7 processor and 8gb of memory, making it more powerful than the MacMini I use.

Read this thread from apple forums.

turn off the display but prevent sleep - Apple Community

I will try this, but I have set display to not go to sleep for an hour in the System Settings, Energy Saver, Power Adapter. Yet the display still turns black and the unusual thing is that when I click the touchpad or touch a key, the screen turns on, I have to log back in, which is normal, but the Roon program has to be restarted, which is not normal. Typically if a screen goes to sleep, when it is awakened apps that were open before sleep are still open.

Will let you know if the fix you’ve suggested solves the problem.

Rugby, so I gave it a try. I set up a Hot Corner on my screen to turn off the display using the instructions in the article from Apple. It didn’t work. I turned off the screen after starting Roon and using my iPad to select tracks to play. On two separate tries the music stopped playing within 15-20 minutes, I checked my MacBook Pro and the login screen was back up. When I logged back in I found Roon was no longer running.

FYI, I had also tried the fix outlined in the article at the link below involving resetting the SMC.

Could it be caused by traffic or some issues on the Wi-Fi system? Should I try connecting my MacBook Pro to the network via Ethernet? Any other suggestions?

I was thinking you would try this command first, before setting up any hot corners.

The Apple support page you provided was from 2014. There is no Eject key on newer MacBooks, not even mine from 2012. I checked and found that there are alternatives. See link below.

I had tried Control + Shift + Power before setting up the Hot Corner, and it didn’t seem to work either. It did turn off my screen, but Roon still crashed after a short while. I will try again at least two more times to check. I can also try Control + Shift + Fn + Power, which is also mentioned in the link above.

I subsequently tried a Hot Corner set up as shown in the screen shot below. 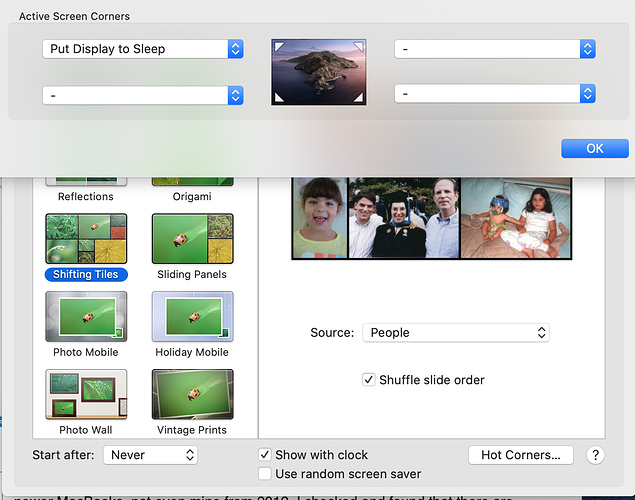 “Put Display to Sleep” is a choice already present in the menu for selecting commands to place in a Hot Corner.

Let me ask one question. Did you want me to use Control + Shift + Power, have the screen turn off, then immediately log back into the computer, go to the Desktop and Screen Saver settings and use that same command, Control + Shift + Power as the Hot Corner rather than the command shown in my screen shot that is already in the menu choices? Trying to understand why you suggested using Control + Shift + Eject first, before setting up the Hot Corner, as that is not clear from the Apple support page article, which perhaps was written before the Desktop and Screensaver menu included a pre-defined item “Put Display to Sleep.”

One last thought - Roon shut down when the log in screen came up in each of the last several times about the same number of minutes after I used the Hot Corner. I will see if I can time it precisely. If Roon crashes after the same amount of time in each instance, would it suggest some kind of problem in the MacBook Pro’s NVRAM, SMC or some other internal system of the computer?

Would you kindly reproduce this issue once more and make a note of the time that the screen turns off and Roon closes? Then please use the directions found here and send us over a set of logs using a shared Dropbox link so we can take a look at what exactly is happening during that time.

Dylan, I cannot upload the zip file through this interface. The link that follows is to iCloud where the zip file is located. sameyers1@mac.com zip.file

Let me know if you can open it. If not, I can send a link to the zip file from iCloud to an email address or compatible mobile phone number. As a long-time Apple user I don’t use DropBox or OneDrive.

Dylan, one last point that I made in a message directly to Rugby (Daniel). I have no such problems using the BluOS interface. Whether the screen is awake or asleep, BluOS is able to access the music files on the MacBook Pro and the computer does not kick it off, the log in screen does not pop up after the screen has gone to sleep.

After a month without a response from Roon technical support I thought it appropriate to post the solution I identified to solve the problem encountered using my mid-2012 MacBook as a Roon core. The problem was that Roon would shut down after about 15 minutes of use. The screen would switch to the logon screen even using a variety of supposed fixes in the Apple settings.

I undertook my own investigation and found there are several apps that will prevent the display from going to sleep and can also be used to prevent the system from going to sleep. I tried an app called Amphetamine, which is freeware, and lo and behold Roon is now running fine. My display, rather than going to sleep, goes into screensaver mode after 5 minutes and the system can be set to run indefinitely or for a defined period of time. The best feature is that you can set up Amphetamine so,that it starts when Roon starts - Roon “triggers” Amphetamine to use their terminology. You can find it in Apple’s App Store.

I hope this post is helpful to any others who run into the same problem running a a Roon core on a MacBook Pro.

Great post. I have the same problem. I installed Amphetamine on my MacBook Pro, which holds the core Roon app. When I access the core using a remote iMac or a remote Airbook, I can see the entire Roon application, and all the menus. But I can’t see any of the audio devices. I can go to Settings, and see Audio, but no devices show up. So I cannot choose any audio device from the remotes. Any ideas on how to fix. Can you please tell me what all of your Amphetamine settings are? Also,do you start a new session “indefinitely”, or do you pick option to run Amphetamine when Roon is running?

I’m glad my post has been somewhat helpful. I have had no problem seeing my various devices, including an NAD C658 streamer/DAC/pre-amp, BluOS speakers and a Sonos speaker. To answer your question about my Amphetamine settings, I have it set up to start or be “triggered” when Roon starts. I have the session time set to Indefinitely. With Roon as a trigger, Amphetamine shuts down when Roon is closed. You don’t want to pick some defined period of time while Roon is running, or you may find Roon shutting down when you want to play some music.

As to your problem seeing devices, I use an iPad and occasionally an iPhone to control Roon, not another Mac. I do have some thoughts on something you should check on the MacBook Pro being used as your core and that is to check your settings for Sharing in System Preferences. I have File Sharing, Media Sharing and Bluetooth Sharing checked (on) on my MacBook Pro. Unless you share files and media, you may not be able to see them (or the device) when you try to control Roon from another device.

FYI, my music library (for iTunes and Roon) is on an external USB drive, powered from the MacBook Pro’s bus.

Good luck and let me know if you make any progress.

Stephen, thank you for your reply. I have come up with two solutions to allow my audio devices to show in all Roon Remotes, but frankly do not know the advantages or disadvantages of either. I find the Amphetamine discussions of indefinite sessions and triggers confusing and not intuitive with respect to what actually happens when I close the lid on my MacBook Pro.

As I understand Amphetamine, if you set a program like Roon to trigger (start) Amphetamine, you need not also manually start an indefinite session. The trigger keeps Amphetamine running as long as the program triggering Amphetamine is running. That’s how it works on my MacBook Pro.

As you note in 4, the display will sleep or display a screensaver for awhile if the lid is open depending on your OSX settings.

If you want programs like Roon to keep running you don’t want to have the system go to sleep when the cover is closed. System sleep means your CPU and other functionality is inoperable with a few exceptions allowed by OSX.

As to 8, the purpose of Amphetamine Plus is to allow your system and programs to run with the lid closed without overheating. Normally, a closed lid puts the system to sleep, so the fans in the MacBook Pro will not operate. Plus supposedly includes code to turn on the fans when the lid is closed in order to maintain safe operating temps. You can email the Amphetamine author to confirm.

Enjoy the music. All this techie stuff is diverting you from that!

Thanks. What is somewhat confusing is that you can start Amphetamine by selecting, start when application X is running. You can also go to Preferences to set up “triggers”. Not sure what the difference is. Also, once you set up a trigger, I see that one can enable it or not enable it, and you also get options for “allow display to sleep”, “allow system to sleep when displayed closed”, and “allow screen saver to run”, for each trigger. I have settled on at least having the box checked, “allow display to sleep”. This does not impact my ability to still see my audio devices in Roon from my remotes. I rarely use that MacBook for anything than running Roon, and it does not seem to get hot or warm.

Sounds like things are running well. if your MacBook isn’t warm the internal fans are Working and Amphetamine Plus is doing it’s job.

Yes, software can be confusing. But you figured it out. So enjoy the music!