I’ve wobbled on elsewhere, so I’ll keep it short…

Decoupling gliders from Herbie’s Audio Lab are great for making speakers easier to move around. Inexpensive PTFE furniture glides should work fine for seating, if your chair is not already on wheels.

On power conditioning, it would be great if there was a standard approach for measuring the quality (THD?) of existing power to help decide what treatment options make sense. Some situations may ecall for regeneration, while others may be fine with active cancellation or filtration of high-frequency noise.

I’ve completely upgraded my Audio system over the past year or so. One of the most recent improvements I’ve made was to install a regeneration unit (PS Audio PowerPlant 12). Noise floor is now non-existent and soundstage is improved from what I’d considered was already good.

Yes, they’re excellent, I use two - and dedicated mains made them excellenter!

My kind of word; which I join David Snyder in applying to Herbie’s anti-microphonics products. Try my sandwich of three Baby Booties under a sensitive streamer, for example, and three more on top with a weight like a Darko doorstop to suspend your equipment between vibration-absorbing material…

Have to agree clean power makes a huge difference even though I was not a believer until I tried an EquiTech unit in my system. There are lots of good articles on balanced power that google will help find for those who are technically minded. Enjoy!

Sorry to go on, and I’m sure your power device works, ( I have regeneration and every cable is ‘HiFi’)

However, simply going mains distribution board to your stereo is an immense and cost effective upgrade

I’ve no advantage in this, it’s relatively cheap and an an amazing upgrade

I used an EMI meter to check my house power and can verify it to be true. The house power all around my media closet read high on the meter, up in the 300s. Readings below 50 is considered low noise. In my media closet with an isolated separately grounded 20 amp circuit the meter showed 18 at the wall plug and 14 coming from the Panamax power conditioner.

Hi Mike,
1. What’s an EMI meter ? Have not heard of this, except at the lab I use they have a super costly power analyzer about the size of a 30gal fish tank.
2. Do you think a ‘power cleaner’ accessory makes sense without first improving the AC mains distribution to your audio system ? I’d think the ‘garbage in garbage out’ theory would at least have some bearing on the result you get from a cleaner accesssory.

Someone posted a link on another thread that showed one of these small meters being used to check the power at the wall plugs for noise. So I’ve only been aware of them since that time, a month or so.

The meter measures dirty electricity (EMI) frequencies with the results displayed on a small screen with a bar indicator, numbers and sound.

I’d read numerous posts/threads here advising to run new mains to the system locations for clean power and decided to have a look. Found a couple of meter(s) online for $130-$149 and thought that was a worthwhile investment to check my power. Here’s a screen shot. 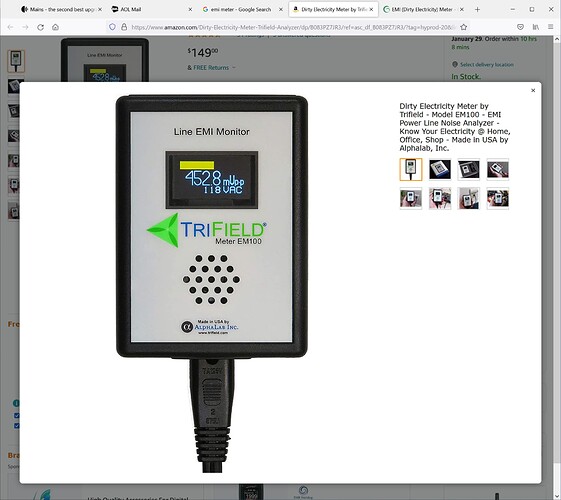 The info says 50. is considered low noise. The wall plugs in my house read high, over 1200 in my living room where my surround system is.

Lucky for me that I had to have new mains run during a remodel in 2015. My media closet has an isolated 20 amp circuit for the equipment. The meter reading in that closet was 18.

Based on what I found it makes sense to check your power first then decide if you need new mains and/or power regeneration or conditioning.

That seems like a really good idea Mike, I just ordered one. Thanks for sharing! 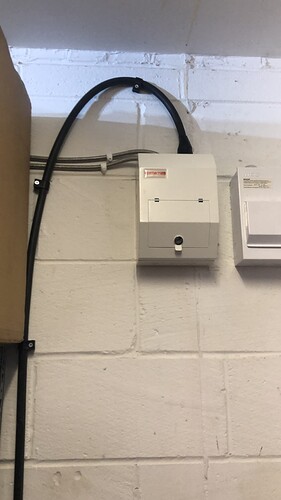 It’s heavy duty armoured cable, hence the rather large radius, but it’s in the garage so no bother

Initial impression is the bass; richer and fuller, more heft
I don’t think it’s as significant a change as the first mains upgrade, but I would’ve been happy with a ‘peace of mind’ outcome if there were no SQ changes

Interestingly (I think) the electrician was interested in the earth rating (not exactly sure what he was testing) - it had been intriguing him since last time
The house ring main was 0.54
The dedicated mains on the spur was 0.38
After the extra cabling it dropped by another 0.04

PS. The armour is steel wire, that’s been given its own Earth line to improve shielding

PS. The armour is steel wire, that’s been given its own Earth line to improve shielding

I presume you are in the UK. SWA (steel wire armour) armour has to be earthed as part of the wiring regulations. It is part of the earthing circuit. Connecting it to earth is nothing whatsoever to do with shielding, just ensuring a low impedance path to earth for that circuit.

As long as it’s better than nothing, I’m a happy bunny

Not ‘Major Upgrade’ like the first dedicated mains. But, let’s be fair, that did the heavy lifting

That’s a significant improvement on its own