I’m a long time iTunes user who has been trying Roon out for a couple of months now. For basically every album, I have a redbook (or hi-res) version and a mp3 version (which I leave unchecked in iTunes - used mostly for my phone/portable use). I like how how Roon has been able to keep them grouped together, but knows to play the primary version. But for some albums I have more versions, be it a special audiophile release or whatever. After exploring with Roon, it seems it can’t always find ALL of my versions under the “other versions” tab- the problem seems to be when I have more than 3 versions of the album. Sometimes the “extra” versions (i.e. the 4th or 5th version) are listed as a different album, but sometimes I can’t seem to locate a specific version at all…

Is the Roon “other version” function capped at only three versions of an album? If so can that be fixed? Or at least is there a way for the user to decide which 3 versions are the stored choices?

Hi @jsa307 ----- Thank you for the report. Can you verify if you have tried using our group alternate versions feature? 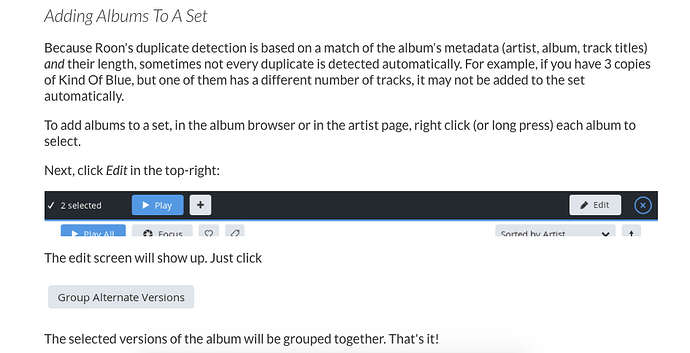 Thanks very much for the reply. Yes I am familiar with the “group alternate versions” feature - ironically I first noticed this issue with “Kind of Blue”, the example used above.

Digging a little further, the limitation does NOT appear to be a maximum of 3 versions - I was able to find a few examples with 4 or more versions listed under “other versions”. Rather, the issue appears to versions missing from Roon altogether.

Using the Kind of Blue example, I have the following six versions of the album (hey, it’s a great album!)

In album view and search view, Roon shows the 2007 sacd, the 2015 mfsl sacd, and the 1992 mastersound cd all grouped together as 3 versions of the same album. The 2009 2xCD (mp3 version only) is listed as a separate album … (yes I know I could group these together if i wanted to). Missing altogether are the 2009 CD redbook version and the 2013 hi-res version.
In tracks view, I somehow also have access to the 2009 CD redbook version, but STILL not the hi-res version (the best version, by the way!)

This is just an example- as I look further in Roon, I notice that for albums where I have a large number of versions, one or more of the versions are not “viewable/accessable” by Roon, and appear to be missing altogether. I don’t know how to locate and access them. All files are in the same scanned directory … thanks for your help!

First off, check the “skipped files” display in settings (Settings -> Library -> Skipped Files) and make sure that none of the tracks in question are listed there. If they are then there’s some issue with the files themselves that Roon doesn’t like.

Next, under Settings -> General flip the switch next to “Show Hidden Albums” and then go back to your albums view. This should show you everything that Roon knows about including items which are hidden (either explicitly or via grouping).

See if the albums in question appear.

Actually, problem not quite solved! So I selected “Show Hidden Albums”, which allowed me to see the missing 2013 hi-res version from the example above … but now ALL of my duplicate versions throughout my entire library are showing up as separate albums!!

I really liked the Roon feature that allowed album versions to be grouped together, so I’d hate to lose that functionality. But something seems to be going wrong- I know the 2013 hi-res version is “accessible” because I can see it when I choose to “show hidden albums”, but yet when I remove that feature, its no longer a choice in the “other versions” tab, seemingly removed from Roon … am I missing something here? Thanks!

Try browsing to the 2013 high-res album and selecting Edit from the three dots menu. In that window click on the button that says “Unhide Album”

Turn off “show hidden albums” and see if that makes a difference.

I’ve never seen the behavior that you’re describing and I think that I have more than 10 versions of a couple of albums (all shown properly under “Other Versions”). The only thing that I can think of is that somehow these albums got explicitly marked as hidden somehow.

Ok following up with more info- the problem seems to revolve around when 1 of the versions has a different number of tracks than the other versions. In the example above, the 2013 hi-res version only has the original 5 tracks, and not the 6th bonus track that is common to the other editions. Again, if I choose to “show hidden albums”, it will reappear as a sepearate “kind of blue” version. But once I un-click the that option, it becomes invisible- cannot be located under “other versions” tab.

The other examples of missing versions I’ve found all seem to have the same “problem” where one of the versions has a differing number of tracks. Can any one of the Roon folks comment on this?

HOWEVER, this is very time consuming, as i have over 10,000 albums and only the minority of the albums suffer from this problem (making it harder to find) … @Eric I know you tried to help earlier in this thread- any suggestions or input? thank you …

I’ve had to do this on numerous occasions as well. @support I would really like know why Roon decides to automatically hide certain versions of albums as @jsa307 and I have found.

This really is odd behavior and it smells like a bug. I have a number of albums that are not automatically grouped as alternates (usually for a differing number of tracks) and those are always showing as a separate album entry next to the grouped version with “show hidden albums” disabled.

All — Thank you for chiming in here and sharing your feedback with us, it is appreciated!

@jsa307 ---- Can you verify something for me. If you were to re-engage “show hidden albums” and select the 2013 hi-res version of Kind of Blue, what appears under the “other versions” button when you click it?

@Eric thanks for getting back to us

Here’s another example, but I haven’t used the manual workaround on it yet: Bill Evans “Explorations” - I have 2004 SACD, 2011 SACD, CD redbook, mp3, and 2011 hi-res versions. All versions have 10 tracks, except the hi-res version which has 12. When “show hidden albums” is set to “no” the 2004 and 2011 are natively grouped together as album versions, and the 2011 hi-res is treated as a separate album. The redbook and mp3 versions are “invisible”. When I set “show hidden albums” to “yes” and then select the “other versions” tab from one of the invisible albums (the redbook version, in this case), I can see both SACD’s, the redbook, and the mp3 album versions - but not the hi-res. Also - both previously invisible albums (redbook and mp3) have “duplicate” written in red letters next to all of their tracks…

Hey @jsa307 – thanks for the report here. It certainly sounds like something is off here, and I’m sure if we can figure out a way to consistently reproduce this, it can be fixed. But we need to confirm the bug first, so let me take a second to explain the expected behavior first.

Roon will look for albums that have similar album and artist names, and the same amount of tracks. When we find albums that meet that criteria, two things happen:

So, if you have copies of these albums that have a different number of tracks from the other editions, I would expect those to not be grouped in with the other editions. What’s really surprising to me is the bolded part below:

In album view and search view, Roon shows the 2007 sacd, the 2015 mfsl sacd, and the 1992 mastersound cd all grouped together as 3 versions of the same album. The 2009 2xCD (mp3 version only) is listed as a separate album … (yes I know I could group these together if i wanted to). Missing altogether are the 2009 CD redbook version and the 2013 hi-res version.In tracks view, I somehow also have access to the 2009 CD redbook version, but STILL not the hi-res version

What happens if you switch on the option “Show Hidden Tracks”, find these two albums, and then in the Edit screen for these albums, choose Unhide Album? Any change?

Can you let me know a little more about how these albums are stored on disk? Are they each in their own folder? Can you give me the details of your storage setup, as described here?

Just yesterday I noticed the redbook version of Miles Davis - A tribute to Jack Johnson was missing. Both DSD versions showed as primary and alternate versions. I had to turn on hidden albums to get the CD version to show. I edited it and performed unhide. Turned off hidden albums and it dissapeared again.

You’re saying you had three versions all set as duplicates, but only two were showing in the Other Versions popup?

MFSL is the primary:

CD not shown as an alternative version: 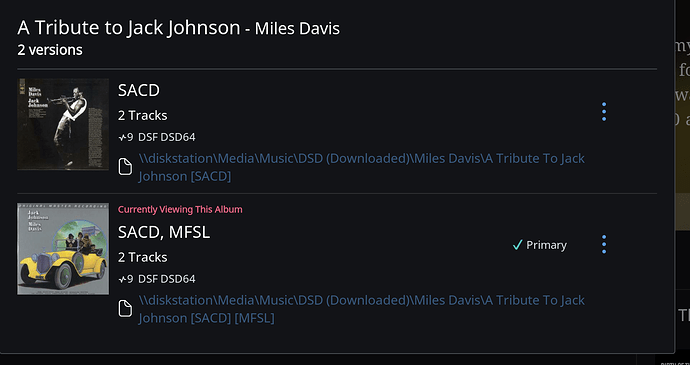 Turn off hide duplicate albums in settings: (CD shows up and is labelled a duplicate) 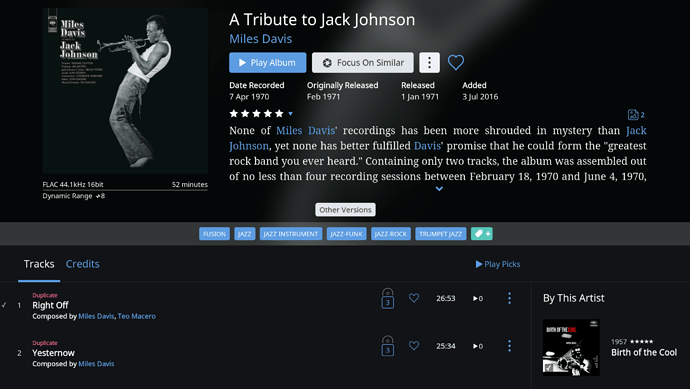 It also now shows up in alternate versions: 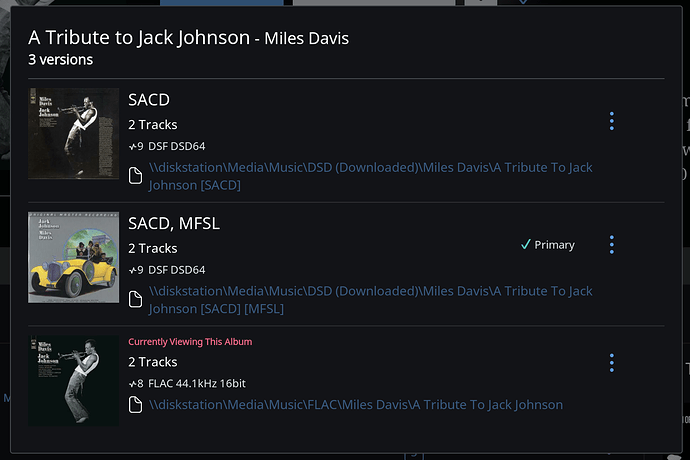 At this point I also edit the cd version and click on the unhide, but that does nothing, as soon as I go into settings and turn off show hidden albums my CD version disappears and we are back at the first couple images.

This is a good example to show the issue as all versions of the album only have 2 tracks.

@mike - i have the exact same issue as described @DrTone - his screen shots sum it up nicely. as he illustrates, “unhide album” doesn’t fix the issue - when “show hidden tracks” is turned off again, the album in question goes back to being invisible.

re: storage structure - all non-DSD tracks are organized by itunes, so separate folders. dsd is in its own directory, again separate folders. i share the itunes and dsd directories for roon. setup: using late 2014 mac mini (sierra 10.12.3) connected to a qnap ts251+ NAS, hardwired

Thanks. We’re going to look into this.

Can you share a screenshot of your storage tab in Settings?