Same here… have never seen this before, but now I see this occasionally on both my current Cores…
A reboot usually fixes the issue, but I’ve seen it return after some hours.

However, none of my Cores are ROCK-BASED, one is a native QNAP install and the other is a Linux (DietPi) based Core

You mentioned that a reboot fixed this issue for a while, correct?
If this is the case, can I please ask you to do the following?

Thx Noris, i’m away at the moment. Will look at this asap.

I’m not sure when this has happened, but my QNAP TS-470 Core just reported the metadata improver-error. Just connected to it now, 21.55 CET…
Unable to grasp the logs right now, as i am on an iPad. Will make them available tomorrow.

Thanks for the timestamp @Mikael_Ollars, do send me logs when you have a chance!

I rebooted the mentioned Core to rid myself of the error message, and after the reboot, i retrived the logs
However, the Metadata-improverservice did not start at this time?
So, you most likely will have a failure a few minutes before the timestamp of the zip-file…
Thanks!

Edit: I rebooted the Core once more, and now everything is up and running.

Thank you for sending the logs, I can confirm I received them. Do you mind providing some additional information regarding your network setup? What is the model/manufacturer of your networking gear and how is the QNAP connected to the network (directly to the router)?

Hi Noris,
The Core from which i grabbed the logs is a native QNAP image, 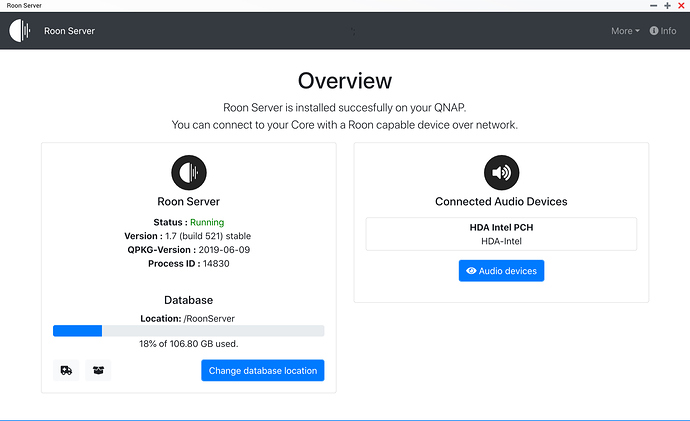 The QNAP is a TS-470 Pro, with 16Gb RAM and upgraded CPU (Intel Core i5 3470T) and the Roon DB on a dedicated 128Gb SSD and three 6Tb WD Red in a RAiD5 cfg.
It is connected to an ASUS RT N-66U which is set as an Media Extender over 2.4Ghz WLAN. The media extender connects to my main router which provides Internet access, an Asus RT-AX58U.
The AX58 is connected to a HP ProCurve unmanaged switch which gives wired connectivity to a couple of endpoints and other network items in the household. Oh, all wireless devices connect to the AX58 on a separate 5Ghz WLAN.

But, i have this issue on my MOCK right now also, which is displaying it right now. And that one is wired to the ProCurve and on to one of the AX58’s LAN ports. (The WAN port on the AX58 is directly wired to the FMC in my apartment)

Thanks for letting me know the network setup!

But, i have this issue on my MOCK right now also, which is displaying it right now. And that one is wired to the ProCurve and on to one of the AX58’s LAN ports. (The WAN port on the AX58 is directly wired to the FMC in my apartment)

Just rebooted the MOCK, no warnings as of right now. And the album i added from Qobuz before the reboot now has been added correctly.
This is a “clean” DietPi X86 install actually, i misled you by calling it a MOCK. The only software installed is Roon Core and NetData…

2 posts were split to a new topic: Manual reboot of ROCK fails

3 posts were merged into an existing topic: Build 521, complete loss of database

Please provide some feedback on what’s causing this annoying behavior?
On my portable Core (MacBook Pro 2017, external USB media storage) I have to reboot several times to rid myself of this issue. And it’s taking for f–king ever… Roon has lost it’s purpose for me on several accounts since 1.5…

I see this repeating too. The major annoyance is the multi minutes it takes Roon to restart. Can’t Roon do some sort of quick start?

The bigger your library and slower your system and I/O the longer will be the startup.

I’m sure that is true. It does not change a valid issue, which is Roon takes too long to start up. Foobar starts instantly, same size collection.

If Roon is going to have issues that frequently require restart, like these metadata issues, the resource leaks that require rebooting, etc., it would be nice at least if the software would start up more quickly.

(My system isn’t slow BTW, just to head off that line of logic).

I have the same Metadata error message appearing, I’m also not getting any metadata for new albums. I have a ticket open with Dylan - I had the issue after the ‘problem’ release was installed - so he is progressing for me. You might want to compare notes Noris.

For info I’m on Synology NAS. Hmm, just thought, it’s an old setup, might that be the problem (wasn’t the issue to do with Graphics processors - I thought it had hit old Android devices (mines an LGV30) but maybe old Synology is an issue too). I’ll update my ticket with Dylan

Very true, but like @James_I I also feel this isn’t an unreasonable request;
Make Roon start up and be ready to play music from the “last known good” library, and THEN look for changes and do whatever is taking so much time…
And please… Do not demand internet access… I have my library with me, and IF I have a need/want for online music, then so be it, but that’s a second hand choice for me.

We’re always looking to improve the efficiency of Roon, if you have any specific requests that you’d like to see, please do submit a feature request.

As for the “Metadata Halted Issue”, we’re not quite sure why this issue occurs but from the vast majority of users a reboot sorts this out. You mentioned last time that you were not seeing this after a reboot.

If you’re still seeing this behavior can I please ask that you reproduce the issue, note the exact local time + date it occurs and send a new copy of your Roon logs?

Apologies Noris, but i have missed your post here. I have this issue recurring on my different cores from time to time. I almost have a feeling this rears its ugly head every other restart?

I’ll make sure to zip up the logs next time i see this!