I have downloaded [ffmpeg-git-i686-static.tar.xz], uncompressed and then uploaded said file to external SSD location RoonOnNAS/bin 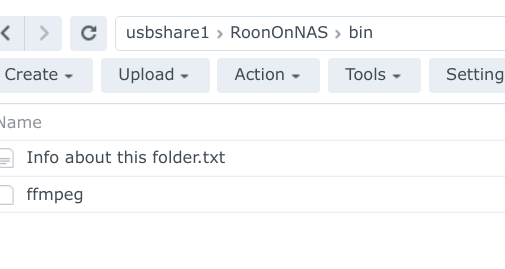 Stopped Roon server and then restarted.

I have seen other threads on this but not seen a definite resolution?

You have downloaded the i686 version instead of the amd64 version which is the one you need.

Hi Scottav thanks. I have an Intel processor on the NAS so I think I have the right one?

It doesn’t matter that you have the Intel processor Roon uses the ffmpeg-git-amd64-static.tar ,try it and see.

Thanks.
Ah ok. Uploaded the amd version of ffmpeg to the bin location. Stopped and started Roon server on the NAS.
Sadly still does not work and gives the same message: ‘playback was interrupted because a track failed to load’.
I assume what I am facing is a codec issue but I do not know what my next step should be?

You have the wrong one as @Scotav said. You want the amd64 version.

Hi, new to Roon and ROCK, so apologies for anything dumb or misconstrued. I want to setup Roon on an i5 based NUC using ROCK. I have studied the installation instruction and I have a question about the installation of missing codecs step. Am I correct in assuming I should use the ffmpeg file from the ffmpeg-git-20200528-i686-static static build rather than the ffmpeg-git-20200528-amd64-static build? (I am assuming that the ‘i686’ and ‘amd64’ parts of the naming convention indicates the target…

Hi thanks. I am not sure if you have seen my last post I have now used the amd version to no effect.
The problem remains. Grateful for the help so far.

Can you confirm that you have completely unpacked the .tar file as the main compressed file needs to be unpacked twice to obtain the ffmpeg file? You should end up with this; - 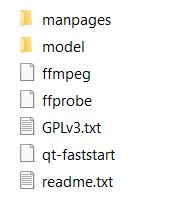 The ffmpeg displayed is the one you should use. You may have already done this but just need to check.

Yes opened on Chromebook so did not need to unpack twice. End result below:

Then uploaded to bin location on external SSD attached to NAS. I wonder if the external location is causing issue?

The files should be in “/user/bin” and not in some random directory on an external drive.

I have downloaded [ffmpeg-git-i686-static.tar.xz], uncompressed and then uploaded said file to external SSD location RoonOnNAS/bin

So I think the file is in the right place but refreshing RoonServer I still cannot stream AAC for example.

What are the permissions of ffmpeg file(s)?

I had this setup some time ago on my QNAP and it worked perfectly using the external ssd. Chris changed the method of adding ffmpeg on QNAP to the same method as Synology. If you are using the USB SSD storage method for your Roon Server the ffmpeg should be stored in the bin directory of the RoonOnNAS as you’ve already described. This should be working for you but at the moment I don’t understand why.

When you open the Roon App on you Synology does it state that you are using the “User Supplied Version” similar to the QNAP? (ignore the versions): - 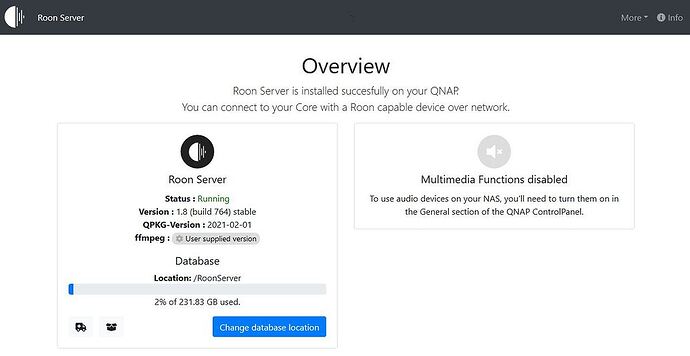 Thanks people. I turned off my firewall(fw) to no effect.
I then checked on the permissions for the ffmpeg file (thanks musicjunkie) and execution was not set. Set execution to on and it worked

Set fw on again and it did not work. Turned fw off and tested several times and all working well.
This is solved for me - confident I can work out the fw. Many thanks.

At least you’ve got it sorted.