Hey, my problem is that after making a fresh install of RoPieee 3.020 stable MQA playback started to lag (before that I had some older, 6 months older maybe version). It plays and then I can see on my SMSL M500 screen that the MQA logo disappears for a second and then comes back again. While that is happening the music stops playing for a part of a second too.
I’m not sure if this is related to RoPieee, but I have tried DietPi and got better results, but still, there was some lag. If I would need to compare, it would be RoPieee - 10 lags in a minute and DietPi 1 lag in a minute.

Anyway, there is no lag and music plays beautifully when I connect my DAC to a PC.
Sounds like a Raspberry Pi hardware problem? All ideas would help

My setup:
Roon -> Raspberry Pi 3 Model B Plus Rev 1.3 -> SMSL M500 DAC (via USB).
There is Allo DigiOne connected to my Raspberry, but it’s not connected to the DAC right now.
I use iFi iPower power supply.
Internet connection via Ethernet port. At the time of testing the speed was stable 300mbps (of course not sure what was the speed inside Raspberry).

The signal path doesn’t look any different from the one when I connect it to a PC: 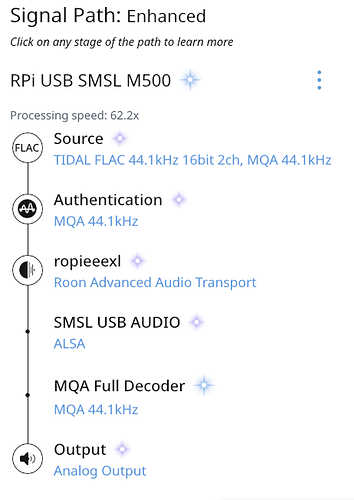 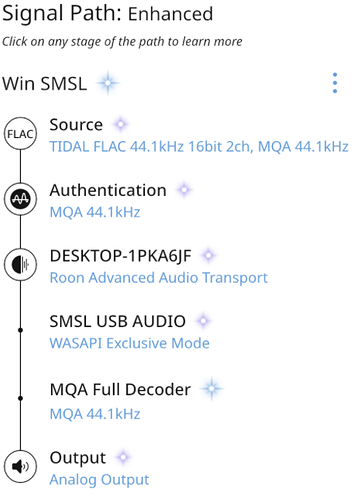 Nothing to see in the logs: all seems ok.

I’m pretty sure your DAC is to blame here.
I know it works on Windows, but that’s not really relevant as the mechanism to drive the DAC is different (totally) on Windows then on Linux.

Is there a firmware update or something like that for your DAC?

I’ll take a look at firmware updates. I think I’m one version behind the latest.

Thank you for checking the logs and for insights

There are a bunch of threads here on the M500; if you set it as decoder & renderer you can avoid the gap between tracks, but it still has it at the beginning of albums and when formats change. I don’t get the same behavior from direct connection to my Windows machine via the Tidal app, but do for Roon using the USB out from the PC. So I don’t think it’s Ropieee but Roon. And if you search on ASR, lots and lots of people have had the same issue with different set ups not including Roon. I’ve decided to keep it, but I don’t love that. It’s definitely on my list to maybe sell, even though I like MQA and the next best solution is either an implementation I don’t like or really expensive. Good luck!

Hi- I’m running a RopieeeXL into a new SMSL M500. MQA unfolds happening as expected. Before every MQA track, there is an audible “pop-pop” - it’s not terribly loud, but it is clearly audible and does cut off the beginning of each track by a short bit. This happens whether I’m hitting the play button or if one track finishes and the next begins. It happens whether I set track delay to 100ms, 500, 1000 or 1500 (I haven’t gone higher). It doesn’t happen with the same DAC on 16/44 content. On so…

My Hiby R5 DAP did this too when I had Tidal. I also have the SMSL SU9 but never noticed any issues with Tidal and MQA popping and I use Ropieee.

Small update, but maybe that will help someone.
So nothing helped until I have tried Moode Audio. No more dropouts/lag/stuttering while playing MQA.
I really have no idea what causes it. Looks like drivers on the Linux side, because all distributions are using the same Linux 5.4 kernel, so the same ALSA I guess, but different drivers or something else…
Edit: to make it clear RoPieee was working perfectly fine for me and my M500 with RoPieee version 2.595 (2020/09/06).

So nothing helped, untill I have tried Moode Audio.

So, since I’ve never considered Moode, I need to go do some research to clarify - is Moode a functional drop-in for Ropieee (I realize it can do a bunch more)? And you just replaced the Ropieee software on your RPi with Moode, and everything worked with the SMSL M500?

If so, might be worth telling @spockfish so he can take a look and see if he can understand what’s going on. I really love Ropieee and would love to stick with it if I can / especially would like to not run a mixed environment.

Moode has no Roon bridge by default, but you can install it manually using the command line.
So I installed Moode on another card and installed Roon bridge on it. Now I have 2 cards, with two different OS. Both can act as Roon bridge.
Of course RoPieee is the best

Update: RoPieee works perfectly wonderful with my new RPi 4 -> USB -> SMSL M500 even with MQA 192 kHz, the case is closed for me

Ok now I gotta try again! My RPi is a 4, and I was having those click @ beginning issues. Do you mind sharing what your settings are? 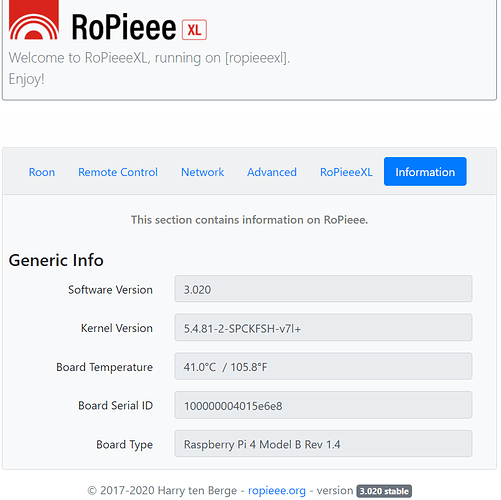 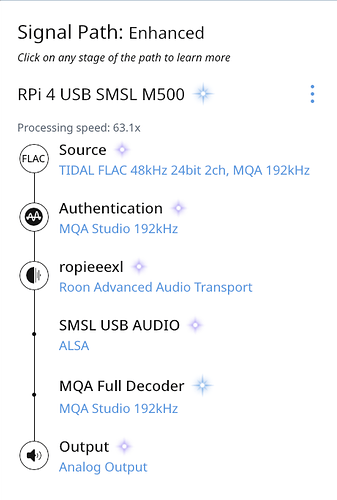 Roon settings are default I think 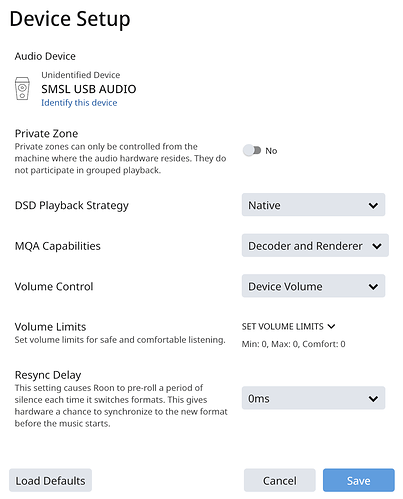 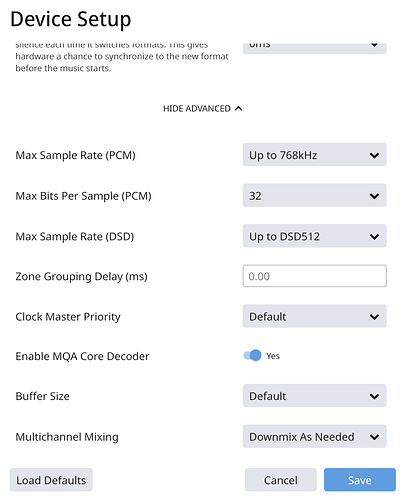 Sorry, I meant the settings in the Roon/Settings/Audio tab (including the advanced part). Thank you!

I have updated the previous answer