Check out guys, Tidal to launch Hi-Res audio streaming in 2016 this is really good news…

I really hope this will work on ROON!

The decisive thing is if the MQA decoder will be build into ROON!

MQA is basically HiRes wrapped/encoded below the CD quality layer right? Similar size better quality. Or is there more magic going on?

That is great news Guy.

Roon is working with Meridian to get software MQA decoding into Roon but no timeline has been announced.

@Brian, are you able to say how processor intensive such decoding will be ? It may be helpful for people considering new hardware to know.

I can imagine that someone decoding MQA in Roon and then sending it to HQP on the same machine to upsample to DSD256 and apply real time room EQ with the convolution engine may want a Beowulf cluster.

People with MQA enabled hardware will be able to use it from the outset by sending a bit perfect stream from Roon.

I’m not sure how Tidal will implement MQA but it sounds from the article as if all current CD quality files will be converted to include MQA code. That certainly seems preferable to having to manually add new MQA versions to our Roon libraries. It would be interesting to know how MQA versions will be created. Are you able to shed any light on those topics @palbratelund ?

@andybob Having been to the one of Meridians MQA demos and gotten a chance to speak, I think that MQA is not going to play nicely with HQP. Meaning, the whole point of MQA is the timing and filters that Meridian is imposing on the audio stream. All stuff which will be jettisoned when passing it through HQP.

Roon has said from the get go it will be ready to act as an MQA decoding point so that we would not have to buy specialized gear. But, to do that, I think, Roon will also really need to be the “final mile” to your DAC.

Ah thanks Daniel, they may well turn out to be mutually exclusive options.

@Brian, are you able to say how processor intensive such decoding will be ? It may be helpful for people considering new hardware to know.

I don’t know, but my impression is that it’s not sufficiently expensive so as to dictate hardware choices.

That depends. If you are passing round PCM to endpoints, then once Roon has decoded, it’s no longer “MQA” and the ultimate (e.g. DAC management) benefits of MQA will be lost. But Roon could decode to 192k (or higher) PCM and then pass that off to HQP, no? It’s only if you want the full benefit of MQA (if implemented in the destination DAC) that you need to pass the MQA bit-perfect to the DAC/endpoint/Meridian speaker/etc.

Please correct me if I am wrong but isn’t MQA just a clever way to send HiRes files down a smaller pipe (we used to call it compression) and so has no magic improvement to the original signal that can be lost.

It’s way more than that Nick. The most important thing it achieves is an end-to-end recording-to-reproduction chain smearing in the time domain of approx. 10 microseconds. There are a lot of other very amazing and frankly revolutionary concepts in there as well. Triple sampling to address the ear’s three listening “modes” (environmental noises, animal noises, speech), non-linear sampling, and the ability to negate ADC characteristics in the DAC.

And, as you say, can all be delivered in a FLAC-compressed CD-sized pipe.

OK I think I understand. To get all these benefits does the music have to be totally done in the MQA wrapper. So if you have am old compressed rubbishy recording can it be magically transformed or will the full benefits of MQA be on newly recorded material?

At beginning, we will just transport MQA files (in FLAC wrapper) to external hardware that’s supporting MQA decoding. But we will certainly also soft decode in the future also on desktop so you can enjoy MQA quality with any DAC. In mobile applications we will of course soft decode from launch.

To begin with it will be a rather limited offering of higher than redbook content, but eventually we will also run all our redbook content through as you then will lose the brickwalling artefacts and also get better and more accurate coding of the PCM itself.

For us it is more important that we do this right rather than have a vast catalogue of questionable character. Quality over quantity. As we go along we will fill up the tanks quicker and quicker.

Tangentially, Tidal is such a confusing company - they have an unparalleled high-quality streaming service, that basically owns the english-speaking audiophile community.

But, meanwhile, all their press/marketing emphasizes rap and rap artists, and mainstream streaming competitors (Apple, Spotify, etc) - as though hq-streaming is ‘nice to have’ but entirely secondary. That would be ok, except they seem to have no significant market-share for that mainline streaming-audio business, whatever it is. Anyway, I usually feel like we’re (audiophiles) a bit of an unloved stepchild, somehow.

But now they do this, squarely aimed at audiophiles (kindof, anyway), the ‘silent [super] majority’ of their customers. Does this mean that they’re refocusing, or was this just a happy accident? Odd.

Well, if their main business goes belly-up, maybe Roon can use our lifetime subscriptions to buy-the-company.

It’s kind of natural for the owners taste to permeate a business (looking at you, Rupert Murdoch). If I owned Tidal people would probably remark on it’s predilection for trucking songs and prog rock.

But what I have been impressed by is the continuing incremental expansion of the catalogue across a wide range of genres. I often find new albums have popped up for artists I had fully imported. It’s great to see that work continuing despite the revolving door at the top.

Yesterday Tidal offered to have my Mac OSX app updated. I agreed and finally saw the options to buy and download music. The “store” isn’t what I expected but I did a few searches and found music I could download in either MP3 or FLAC. (I assume the FLAC will be 16/44 files.)

Yes, it seems like the front end of Tidal is slanted towards R&B, Hiphop, etc. Yet I continue to be amazed at how big and deep Tidal’s library is. I estimate that 9 out of ten of my searches for artists turn up good results.

And now, I can buy & download directly from Tidal, if I desire. Adele’s 25 FLAC is going for $17.99. I think I might wait on that right now. But still, I am bullish on Tidal.

I don’t see an update to the Tidal app on OSX?

I’m in the US running the Tidal app on Mac OSX Yosemite.

This is what About Tidal reports: 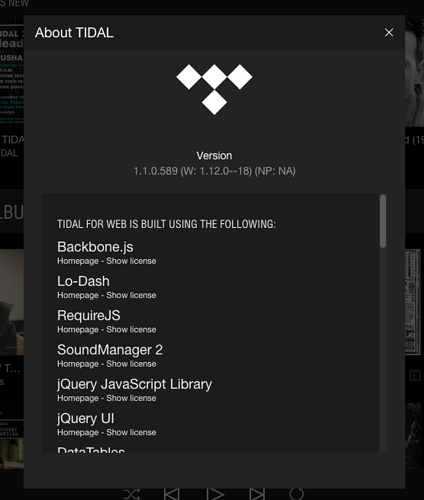 The Tidal store is accessed via the login page. After setting up Tidal I never revisited the login page so unless there’s a way to buy/download from within the app, I never saw the store until I returned to the login page.