I have what sounds like the same problem (and some similar equipment) as the original poster.

Description of Issue
Audio is playing too fast (Chipmunks style, as Mark says). Had played perfectly for several hours on Roon Radio, however — I’d not changed anything.

The same remote plays perfectly (for now at least) to different endpoints, and continues to misbehave on the Bartok when I switch back. Sometimes I wonder if I can prompt this behavior when I move between Roon and Mosaic (for filter choices) apps. But I’m not certain. 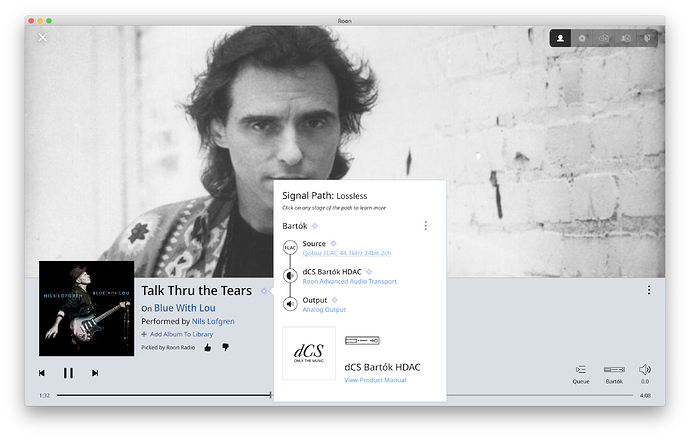 Welcome to the forum and thanks for those additional details!
I have split your post into it’s own thread so we can better troubleshoot your individual report.

Hi Noris — thanks for the reply. Apologies that it’s taken me a while to respond.

In case it gets lost in the thread split — an important common aspect to both cases was the dCS Bartok. FWIW, I’m running all the current firmware everywhere.

Thanks for the additional details. I’ve flagged our hardware team regarding your report and we will look into this further. If you notice any patterns in the behavior in the meantime, please do let us know, thanks!

I don’t know if this is helpful or not but I remember a similar thing happening back in my DAW days when I would open a 44.1 project with the DAW running at 48k sample rate.

Again sorry if this is of no help but it just jogged my memory of a similar issue.

What I was doing:
Playing a local 24/96 FLAC file (over Roon, with NAS and a Nucleus+) to the Bartok.

In case it’s of interest, it was playing on loop.

Eventually, I noticed that though the music was playing fine, the display was garbled and had frozen (see pic). The characters were valid, but it wasn’t the correct info.

Also none of the controls on the front of the Bartok would work. Volume control, power button, other buttons — nada.

What I did:
Listened for a while — was playing correctly

All the other problems remained, though — garbled display and inactive buttons/volume knob.

When I changed back to another 24/96 file, it was fine again.

Annoyingly, before I could do some more tests (e.g. different remote to the Bartok, as well as the same remote to different endpoints), the playback speed returned to normal on all material. The display and front buttons are still non-functional, however.

I’ve got it on loop again to see if I can trigger it again and do some more tests. 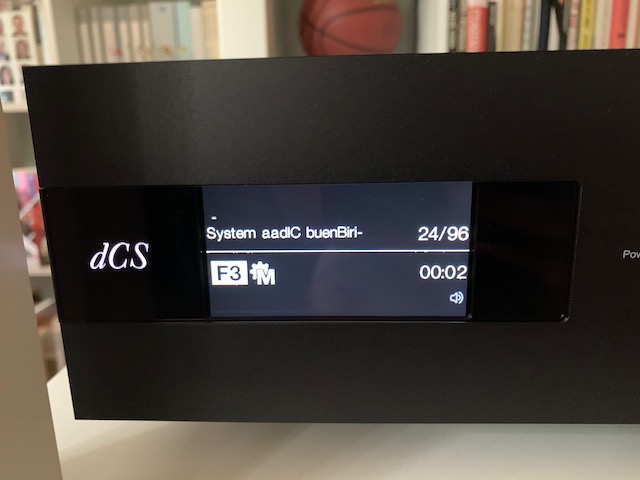 Thanks for taking a look into this further! I have forwarded your new information over to our hardware team, we will take a look to see if we can reproduce similar behavior in the lab. Which firmware version of the Bartok are you using? Is it the latest?

We’ve reached out to dCS for assistance with this issue, thanks for your patience.

A tiny bit more info — had the same issue today.

Same symptoms, but I wasn’t able to change the volume on the Bartók using either its front knob OR a Roon Remote. Cycling the Bartók’s power fixes it entirely, though.

I’ll keep an eye out, and report back with more as I spot it.

Can you please verify you have the newest dCS firmware installed via the dCS Mosiac app?

Yes, no updates available to the version in the screenshot further above in this thread.

Thanks for confirming you have the latest firmware installed.

I wasn’t able to change the volume on the Bartók using either its front knob OR a Roon Remote. Cycling the Bartók’s power fixes it entirely, though.

If the Bartok was not responding from the knob either, dCS support would be in the best position to investigate further. Can you please reach out to dCS support and submit a request directly with them?