Mytek is enable but deteced as no audio device..?

Mytek is enable and connected to Nucleus+ via USB cable.
But no audio devices found. I can’t see ’ Select Audio Zone.

I can see 'Select Audio Zone ’ only when I reboot the Nucleus+. 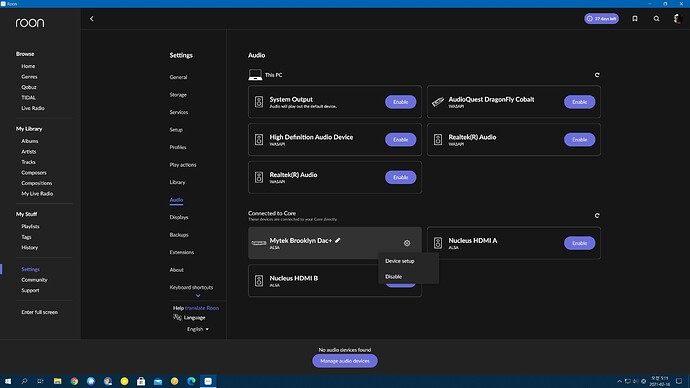 Can you post some more screenshots? What happens when you try to play music? I would expect you would only see ‘Select Audio Zone’ if there was more than one. If there is only one audio device, then surely that would be the default device?

Only when I reboot the Nucleus+, I see Nucleus+ and Mytek Brooklyn Dac+ work fine.

This phenomenon seems to pop up after 1.8 update.

Are Nucleus+ and Mytek Brooklyn Dac+ compatible only when they are power on /off together ?

After both devices are powered off and on together, then it works properly as per the screen shot below. 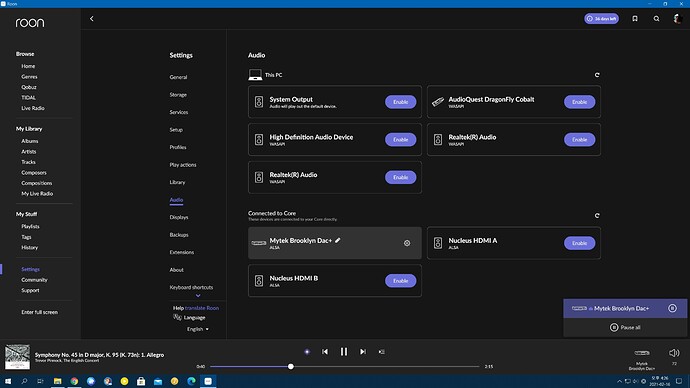 There is a long running support thread on this behaviour. Lots of us it’s happening to with DACs attached via USB to core and other computers that are zones, they drop off and dont appear as a zone anymore even though they are active in audio settings and can be seen by Roon.

Hi, lots of people with the same issue
See this post:

Hey Roon, get your act together on this one. Devices show up in Audio but not in the drop down list. This happens with multiple devices. I am not constantly restarting my Zen Mini.

@moderators someone please sticky this for everyone… @support