Ethernet to and from Nucleus, using some switches

Hello dear Roon community (including Roon team)!
Somes rather loud and worrying pops occur randomly when listening to music. Can’t figure out a specific pattern, but it mostly seems to happen when tracks change from one another, listening to Roon radio most of the time.

No pops ever occurred when I used to feed an analogue signal into the active 8361A Genelec GLM calibrated monitors. Pops came around since the Genelecs got daisy chained using digital signal through AES/EBU output of a DIGIPI+AES HAT () running RooopieXL. I’d prefer to keep feeding a digital signal to the monitors since I’d like to add more Genelecs.

For a test, try to upsample all songs to the same sample rate in Roon’s DSP settings, like 24/192 i.e.
Theory is, that sampling rate changes cause the DAC in your speakers to ungracefully transition.
Let’s hear how that works…

Thanks for that quick help! Not sure what setting to change exactly, so here’s what I see in Roon DSP: 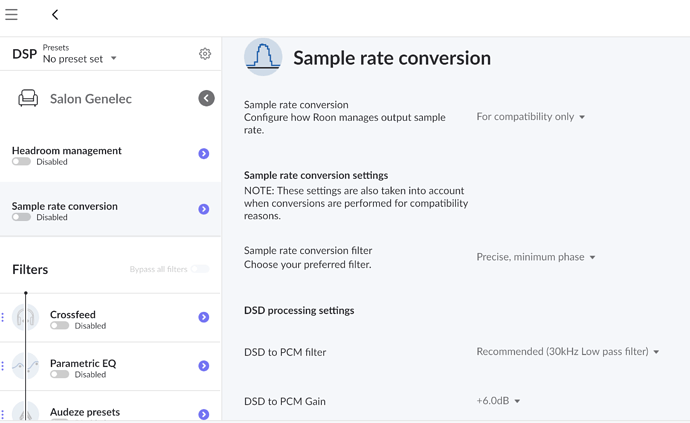 Could you please give some instructions. Thanks again for your very kind help!

Hi @MBI
As a starter you can start with enabling headroom management with -3 or -4 and then set sample rate conversation to Max PCM rate (power of 2), though if you still get some pop’s try the standard PCM rate.

Make sure you then enable both settings.

Give that a go and that should then hopefully stop the pop’s and keep everything working nicely. 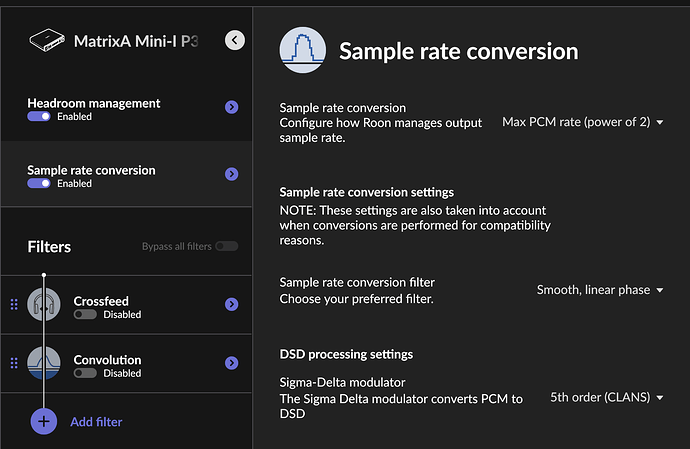 And as Michael rightly advises, also set “Headroom adjustment” in “Headroom management” to -3dB as a starter to counter signal clipping due to so called inter-sample-overs caused by the upsampling process.

Additionally enable “Show clipping indicator”, which would inform you of clipping occurrences by turning the coloured quality indicator star red (the one you click to inspect signal path).

Thanks for adding clarification.

Many thanks to you both!
Will come back to say if any of these settings got rid of those horrible pops in the next two weeks, just to make sure.
So cool, thanks for your help!
Best to you both!

What software is being run on the Pi endpoint?

[to run a cheap but effective AES/EBU output HAT (called DIGIPI+AES from Audiophonics). I could hear no difference from using the analog output of a 123 SINAD DAC going through a 124 SINAD preamp => the Genelec 8361A internal DAC has a SINAD around 100, which makes higher SINAD source devices useless]

I think that software players should send a muting signal to quiet a signal at the point where there is going to be a pop like a transition between bit rates. Sending everything at one rate would eliminate all but the possibility of a pop at the start and end of a stream. As AES is a digital signal it is simply trying to forward the muting signal and the speakers aren’t equipped to react to it. This wouldn’t be an issue if you do the D to A conversion before the speakers and that process did recognise the muting signal. This is supposition on my part but that is where I think your issue sits.

Pops have not shown back up yet, but if they did your hypothesis could be investigated, thank you Henry_McLeod. Why should there be such a thing as a muting signal, since just no signal should theoretically suffice to mute, I don’t get it?

Good to hear that, which version of the upscaler did you go for, Max PCM or Max PCM x2. 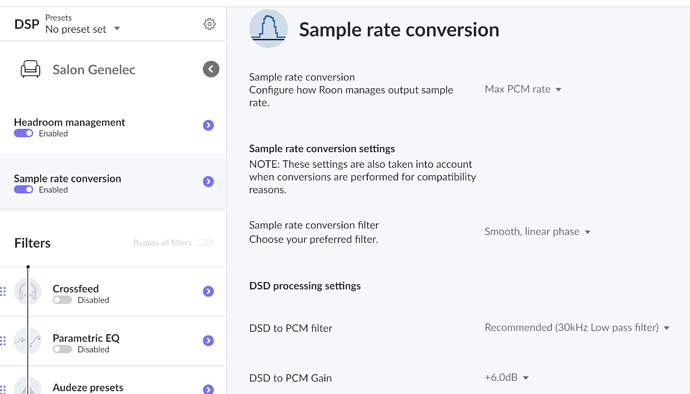 That’s the one least likely to cause popping issues as it keeps everything at the same resolution. That’s why I asked, I was wondering if you used x2 whether the problem went away

Not so keen on trying out, since those pops sound like as if they could damage my speakers and they also scare my wife, who now is a keen Roon user.

If it works for you, then don’t change anything else, especially if it is a bit painful

So far so good. If the pops don’t come back, I’ll leave a comment here in a week or two. Many thanks again for your very kind help!

One pop came around a few nights ago, while turning the music off through Roon.

Nothing you can do about getting popping when stopping, or starting from anywhere within, a song.

You’ll notice that it’s very dependent on the respective song and exact spot within, since Roon doesn’t start/stop using zero crossing detection but as soon as the command is registered.