I have Chromecast Audio right now, but it is limited to 24/96 and doesn’t support DSD. That, and even with the newest firmware, CCA is STILL plagued by audio dropouts when playing Hi-Res audio. (Not a WiFi thing, as the problem is well documented.)

I don’t need a DAC, just a WiFi streamer.

It seems as if the Bluesound is CLOSE, but it doesn’t support native DSD from my understanding.

The Auralic Aries seems to be the device that covers everything, but it is kind of expensive.

Any suggestions would be appreciated.

I am extremely happy with my Cay Audio DMS-500.
Superb sound quality and resolution, and unsurpassed customer support.

I don’t use DSD, the following comments are from hi-res PCM experience. Some of these streamers may support DSD, but I’ve not tested them in that role. All of the below work well, although depending on DAC, downstream components, and connection method (USB, S/PDIF, AES3, I2S) you might be able to notice subtle sound quality differences. From low cost to high:

With the DACs I know, I prefer S/PDIF, AES3, or I2S (depending on particular DAC) to USB as the digital connection method. With USBbridge or microRendu, I used digital-to-digital converters (DDCs) to supply the best input to a specific DAC. I currently own a Singxer SU-1 USB>I2S DDC connecting a USBridge to a Holo Spring DAC, and I’ve owned other DDCs for USB>S/PDIF coax (BelCanto mLink, Schiit Eitr). DDCs and additional LPSs add to the streamer cost considerably, of course.

My current price/quality/flexibility/ease of use is the Metrum Ambre, which has every output I could want, and a good built-in LPS. It does a great job supplying I2S to a Metrum Onyx DAC or AES3 to the Holo Spring (connecting Ambre RJ-45 I2S to Spring’s HDMI I2S input is work-in-progress).

Unfotunately, the microRendu and Ambre both don’t seem to have built in WiFi.

Oops, sorry for that. I live in a WiFi-overloaded neighborhood and gave up on WiFi for hi-res streaming several years ago – too many dropouts – bit the bullet and got the whole house wired with Cat 6. Auralic claims that their WiFi setup can best Cat 6 (something about electro-magnetic interference levels). Allo and Audiophonics have lower-cost streamers that seem to support WiFi, but they need some software installation and configuration via Linux shell, and I’ve not tried them.

Allo seems to have a USB Wifi adapter. If that works with the USBridge and the whole thing acts as a Roon End Point, I think I’m in business.

Pro-Ject Stream Box S2 Ultra is WiFi USB Streamer, but is not available in many country.

Want to re-open this thread as I need a recommendation as well.

I am currently using an Auralic Aries Femto, but as has been reported elsewhere, it’s buggy. More and more it’s requiring a reboot during a listening session after it just stops working.

The problem is that I don’t know of any other streamer with it’ss capabilities: can stream DXD as well as DSD 128 over WiFi. When it works, it works without dropouts. The problem is that it just stops working completely and requires a reboot as mentioned.

The only thing I’ve found that’s comparable is the new Auralic Aries G1 and G2 (or the mini). That said, I’m not keen on going down the Auralic Route again given the issues with this particular device.

I’ve been using the Project Streambox for months over WiFi without a single hiccup. Streams DSD256 flawlessly. Excellent quality. No external PSU or other tweaks needed. 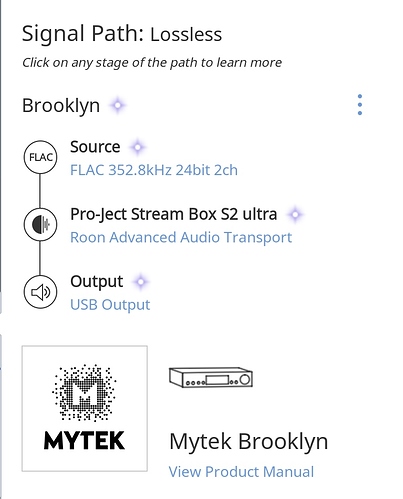 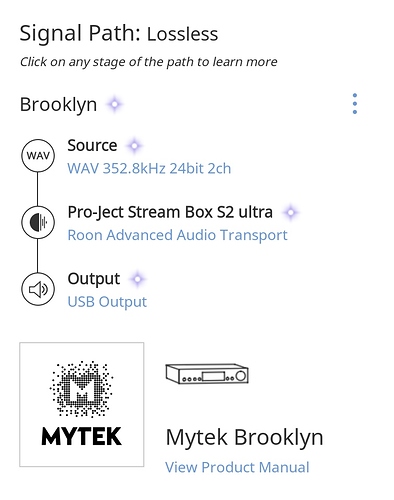 I am currently using an Auralic Aries Femto, but as has been reported elsewhere, it’s buggy. More and more it’s requiring a reboot during a listening session after it just stops working.

Hum… My unit never crashes. But I only run PCM through it. I’m traveling so I don’t have the exact config/version info at hand, but happy to give more details when I get back home.

Andrew - I have two Auralic Aries and an Aries Mini. I have had the same issues that you describe (I use Roon as well with them). I did figure out the fix and it’s not expensive… replace the WiFi card. It seems to go bad after about 8months to a year and as it goes bad the crashing gets worse and worse. Only one downside… the Aries, according to Auralic, will only work with one specific chip. I ordered a whole bunch of them. I don’t know the specific chip off the top of my head and I use a specific screwdriver tool that works with hobby electronics. I’m considering making a short video on YouTube about it. Probably do this at some point next week and will include the chip information that you need. Cost me $19 for a chip from China as apposed to $70 plus shipping both ways to pay Auralic. $5 flat fee for expedited shipping for a whole lot of them. It’s not a difficult task and again for $19 it will function as new.

I have a Schiit Yggdrasil with a Gen 5 USB input and I’d like to find the cheapest streamer without paying for USB decrapification twice. By that, I mean: wouldn’t the Gen 5 USB input perform that job nicely? I don’t want to pay for other features in a streamer, just a Roon-capable WiFi streamer that outputs USB only. I have mostly 96/24 FLAC files and also a Qobuz subscription. My Roon core is running on a dedicated Mac Mini and I have the Google mesh WiFi.

I’m new to Roon, maybe I don’t understand the ramifications of trying to stream over WiFi. Please educate me and thanks in advance for your recommendations.

Hi Steve, welcome to the club. I own the same DAC and I’ve used it with a wide range of inputs. Even with Gen 5 USB, AES or coax are still better than USB, but the difference is not huge. For a basic USB streamer that works well with the Yggdrasil I’d recommend the Allo USBridge (especially with separate power supplies for the Pi and for the Allo board) if you are willing to do a bit of software DYI. OTOH, something like this would likely work even better, at least until Schiit brings out their promised new USB board that reportedly removes the gap between USB and the other sources.

@Steve_Horne if you’re up for a little DIY, all you need is a Raspberry Pi 3 Model B+ (~$35 plus PSU), and RoPieee. Follow the getting started guide, then connect a USB port to your Schitt and enjoy.

@Fernando_Pereira, @mikeb- thanks for your input! I did order the Allo DigiOne Signature and decided to go with S/PDIF connection. I also ordered a linear PSU for the Allo board. My hope is to put a WiFi dongle in the Allo and be able to stream that way.

This is quite a learning curve for me, I appreciate the advice.

As you didnt specify the budget, i would say : for the very top:
Dcs Vivaldi .
For the top: naim unity nova.
Budget hifi, still very good:
Cocktail line( the entry X14)