Hi, I have another instance where it is possible to play/stream songs from my Tidal-app, but they show up as ‘not available’ in Roon (so they do show up but I can’t play them). This happens on my Dutch Tidal account for the album “New Blood” by Peter Gabriel. As the album came out in 2011, I am assuming this has nothing to do with the album having just been added to Tidal (but I could be wrong). I have not experienced this issue with other Tidal Music (only right after the release of Everything is Love by the Carters, but this was temporary). @support

I’m running Roon core on a 2009 iMac and the library is hosted on a QNAP NAS.

Just played both New Blood regular and Special Edition albums from Tidal using Roon. My Tidal account is in the USA. Guessing your problem is related to your Dutch Tidal account.

New Blood is available in the UK. 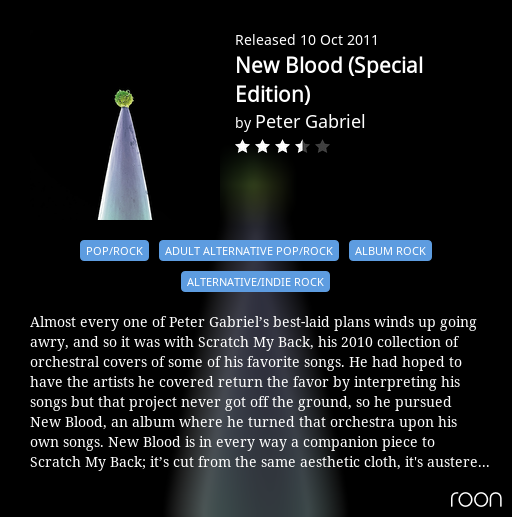 @Quinten_Kroes I have a Dutch Tidal account and I can play the album fine.

Most likely a licensing thing. I tried playing the Peter Gabriel Essentials playlist a couple of days ago and thought it odd that every track was marked unavailable. Today they’re available.

Hi @Quinten_Kroes ---- Thank you for the report and sharing this observation you have made with us. The feedback is very appreciated!

Moving forward, to help aide in our evaluation of this behavior you are reporting to us may I very kindly ask you to please provide the following information: 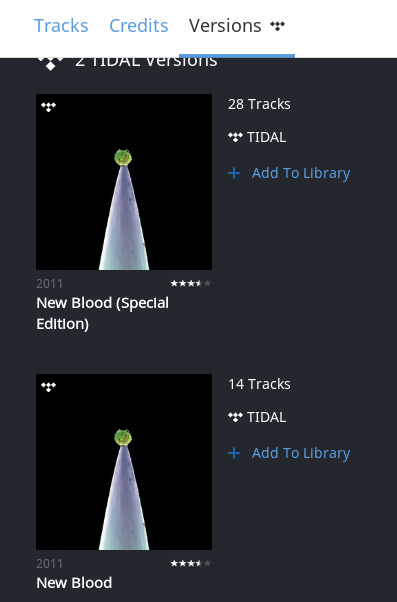 Thanks for following up on this. I think I managed to resolve it, after other people told me they didn’t have this issue with the album.

What I had done originally was to select a number of songs from this album on my Tidal App and used the “add to my collection” feature. These songs then showed up in Roon (as intended) but I wasn’t able to play them and they were flagged in Roon as “unavailable”.

I then selected the whole album in Tidal through the Roon/Tidal integration (so from the Roon-app on the iMac which serves as my Roon-core). The album then showed up in its entirety. While my originally selected songs were still marked “unavailable”, the new songs were not, and I was able to play those through Roon.

In short, it seems there was some conflict or synchronisation issue between my Tidal app and Roon. This is the first time I’ve experienced this problem, but at least now I have a workaround….