Ok so a weird one here guys.

The new Pearl Jam album - Gigaton is available on Tidal and Qobuz separately either using the ipad apps or desktop versions. However via roon it doesnt show up, even if I add it to my Tidal or Qobuz playlists they show up as empty on Roon.

Any ideas? Both my account are fully connect and can search and play all other albums, including Pearl Jams fine.

Search brings up nothing. Gigaton is the eleventh studio album by the American rock band Pearl Jam, released on March 27, 2020. It was preceded by the singles "Dance of the Clairvoyants", "Superblood Wolfmoon" and "Quick Escape". It is the band's first studio album in seven years. The album's track listing was confirmed by the band on January 20, 2020. The cover artwork was produced by photographer Paul Nicklen. Its release was scheduled to coincide with a tour of North America. However, the North Producer Josh Evans t...

Why aren’t the latest albums on TIDAL available in Roon?

When you’re browsing TIDAL in Roon, you’re seeing Roon’s TIDAL database, not a direct pass through of what’s shown on TIDAL – that’s why there’s so much more metadata, like recording dates, lyrics, links to composers, credits, etc.

This is also why Roon can sometimes be slightly behind TIDAL when a brand new release comes out – our database is generated multiple times per week, but sometimes a new album will just barely miss the cutoff, and will show up in a day or two.

Why aren’t the latest albums on Qobuz available in Roon?

When you’re browsing Qobuz in Roon, you’re seeing Roon’s Qobuz database, not a direct pass through of what’s shown on Qobuz – that’s why there’s so much more metadata, like recording dates, lyrics, links to composers, credits, etc.

This is also why Roon can sometimes be slightly behind Qobuz when a brand new release comes out – our database is generated multiple times per week, but sometimes a new album will just barely miss the cutoff, and will show up in a day or two.

Search brings up nothing.

I was really hoping to listen to this today. Always look forward to new release Fridays. Anyway, this used to be a much bigger problem with roon. Sometimes you’d have to wait a week for the albums to show up.

What might be helpful is if the refresh was run at least twice on Fridays since that’s when the bulk of the new releases come out. Shouldn’t have to even wait a day.

Oh brilliant thanks for the replies.

I didn’t realise there was work to be done on Roons side before adding an album. Obvious though now I think of it.

Nice one chaps. Hope you are all finding things to do in this lockdown. 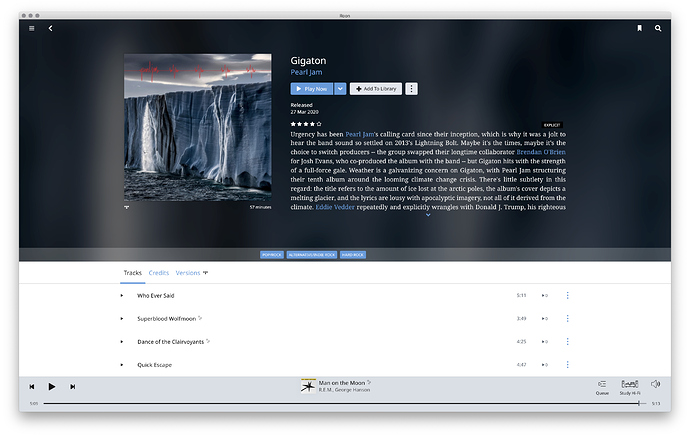 Where are you? Not seeing it in Roon yet in the US, even when favorited in the Qobuz app.

I was able to download via Tidal , then refreshing Roon. No luck yet with Quboz

If I’m impatient I’ll go to the TIDAL app and add to my collection, then in Roon go to Settings > Services > TIDAL: Edit and click on Sync Library Now.

No need for this release.

I actually spun it a few times already. I think it’s one of their better albums of late.

I only subscribe to Qobuz. I know how to do do that, but not working today. Guess I’ll wait. If I was REALLY impatient and we weren’t under lockdown I could pop down to PJ HQ and grab a cd (they’re friends of mine) but that’s not happening for awhile.

I still cant play it here in the UK. It’s not showing up on Qobuz at all and the Tidal version gives the “this track is currently not available” message

Tidal version is up on Roon as of yesterday. No Qobuz version yet.

Gigaton from Qobuz still not available in Roon. I favorited the high resolution version in Qobuz on the day it came out. Have synchronized the library daily since then, but no luck.

Yes patience is one thing, but it is long overdue now.

Ah yes the memories of standing outside track records waiting for the store to open. Running inside and grabbing the record then sitting patiently on the bus ride home to listen to your shiny new record…

We are investigating this issue with Qobuz. Apologies for the inconvenience.

Same problem with the new “Pearl Jam” Album named “Gigaton” that was released yesterday. On Qobuz i can stream it via the app or the browser but roon won’t show it.

Album from Qobuz not showing in Roon
next page →