"No audio device found" and no sound. Roon worked fine for months until now

I changed no settings, but about a month ago I began getting this message and no sound. My separate TIDAL app and all other audio work perfectly. I cannot get Roon to make a sound.

I’m on Windows 10 PC running through an internal Juli@ DAC. No other programs are exhibiting any audio issues whatsoever.

Hi @E41Hz ----- Thanks for the report and my apologies for the troubles. May I kindly ask you for the following information to help aide in my evaluation of this issue. Please see below. Thanks!

Again all other programs deliver perfect audio. I can go direct to TIDAL with no problem, but I would prefer to have my music and benefits of Roon! Thanks for any help you can offer! 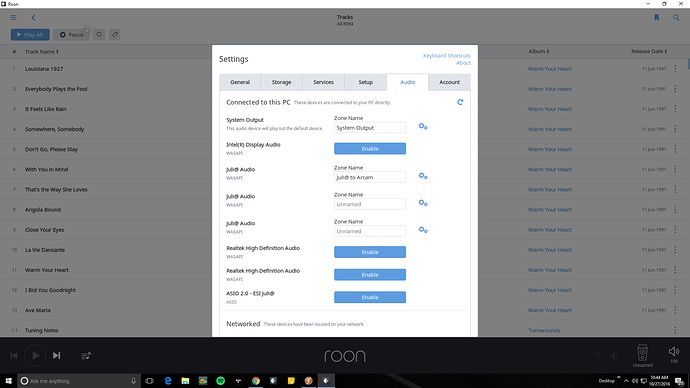 Hi @E41Hz ----- Thank you for the follow up and taking the time to answer my questions. Both are very appreciated!

Thank you Eric. Using your suggestion to switch to the ASIO driver gave me back my audio. It’s odd because I was not using that setting previously before this incident and things worked fine. However, the issue pertaining to #4 is still happening.

Still it may be helpful to the community if I answer your questions:

“If I minimize Roon, upon maximizing the “white page” screen will stay that way…white. No response Forever, perhaps. The only action that remedies the issue is to re-launch the program. Unfortunately I don’t recall which sound card I installed; it’s probably three years old.”

This is actually a known issue that we have seen before:

Roon uses a custom graphics engine, like a video game. This engine is based on OpenGL, which is what allows Roon to provide identical functionality on so many different platforms, and what allows a team of our size to develop for so many platforms.

We depend on OpenGL to render our interface, and in turn, OpenGL depends on your GPU’s drivers to let Roon know when the interface needs to be redrawn. We have seen some graphics drivers have issues with this (Intel in particular, especially with older models like the 3000 and 4000) and we’ve seen this driver weakness affect many other applications, including widely used applications like Outlook and Photoshop.

Unfortunately, this leaves us with few real paths forward. We have seen times when Intel releases an updated driver and the issue goes away completely, which obviously would be a nice solution here. Some Intel drivers seem to work decently (including affected GPUs on OSX) and some appear to have significant issues in how they communicate with OpenGL and the applications that depend on it (like Roon).

In systems with multiple GPU’s, we’ve seen improvements when people “force” Roon to use the non-Intel GPU, as described here. We know that’s not an option for everyone, but it has helped some of the maybe 20 or 30 reports of this issue we’ve seen.

There’s nothing we like less than saying “we can’t do better” but unfortunately in this case we are the mercy of the driver.