No audio from Sennheiser Ambeo Soundbar via Airplay

I have encountered a bit of issue with Ambeo Soundbar as end point using airplay. No problem with Chromecast but airplay. I enabled the soundbar airplay as end point but no sound coming out! I can see the music is playing on my roon remote though. I have no problem stream music to Ambeo using my iphone via airplay, just roon.
The reason I need to stream via airplay is because I need to group other endpoints together as Sonos do not support Chromecast. So I need to stream music using airplay to all endpoints as they all support airplay 2.
Anyone has the answer with the same issue?

So I need to stream music using airplay to all endpoints as they all support airplay 2.

Neither Roon nor any third party app supports streaming to Airplay 2 devices; only Apple devices support Airplay 2 this way.

@Eddie_Hsu, @Martin_Webster is correct about AirPlay 2 devices not being able to act as an endpoint in Roon. When you stated that you enabled the Ambeo’s AirPlay as an endpoint, was this activating AirPlay from within the Ambeo configuration, or do you see the Ambeo as an AirPlay device option in your Roon Core under Settings → Audio? 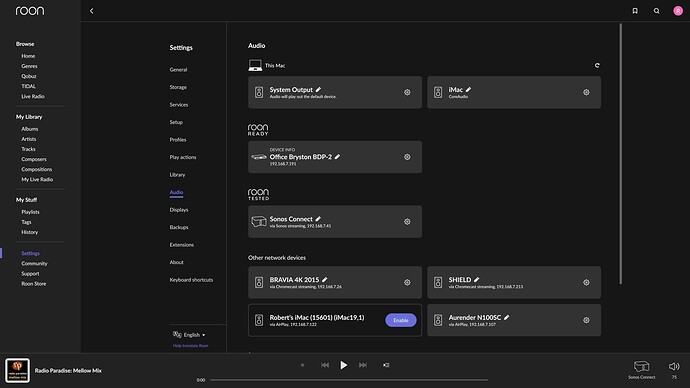 Robert, it is not showing as an endpoint in Roon.

@Eddie_Hsu, a work around is to connect the System Output of a Mac to the Ambeo via AirPlay (using the Sound option on the iMac), and then select System Output for the Mac from Roon and Roon should play to the Ambeo through the Mac.

I wonder if an “endpoint” has technically to be Roon Ready (RAAT). I know my Aurender Server works with Roon via Airplay, but for premium SQ I don’t utilize Roon for Aurender sessions. I would use Bryston or Sonore microrendu with HQPlayer4.

Valid question, but technically an endpoint is any device to which Roon can pass a music file to be played. This includes AirPlay (1), Chromecast, Sonos, and then all the RAAT-compatible devices, two examples of which are the Bluesound/BluOS portfolio of products an Raspberry Pi-powered devices. Different endpoints have different capabilites (AirPlay being the most limited in terms of bit/sampling rate), but the options allow a wide range of devices to be part of the Roon ecosystem. 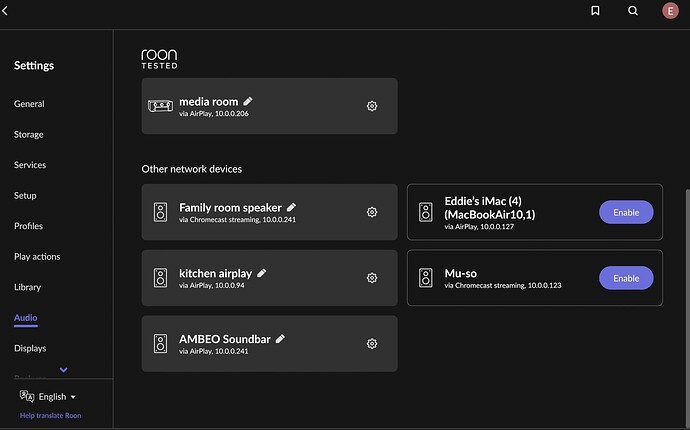 Both Ambeo and Sonos via airplay are showing. But no sound coming out of Ambeo bia airplay. I grouped all airplay devices with airplay support for a party but only Ambeo not working

Thank you Eddie. Can you try ungrouping the Ambeo and sending an AirPlay signal to just the Ambeo? Sometimes grouped items become out-of-sync and may not play well together. And this may be a silly question, but is the Ambeo input set to AirPlay, or is it supposed to switch automatically when it receives an AirPlay signal?

@Robert_F. I already tried ungroup and send signal to Ambeo ONLY but still no sound. I also checked that I can not manually switch Ambeo input to Airplay. I have reset Ambeo airplay too but no use. Reset is the only thing I can push on their control app.

One last idea, have you turned off and turned on the Ambeo? It’s on your network, and as an AirPlay device, but Roon isn’t streaming to it. May be worthwhile to reboot your Roon Core also and see if this helps.

@Robert_F : I just rebooted both roon ROCK and Ambeo. Still the same. Roon does see Ambeo airplay and can see the file conversion map but not playing 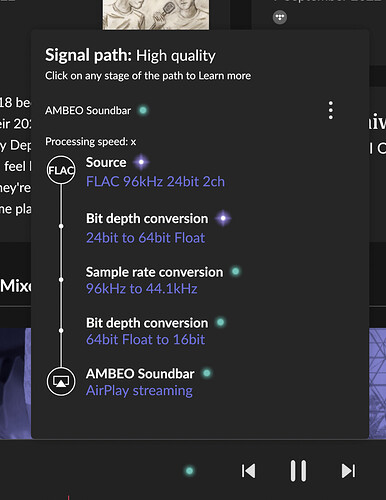 Is there a separate volume for the AirPlay input? What is the volume showing in Roon?

Volume was in 40-50 range. I realised the music was not playing in roon although it is showing the pause button after play was pushed.

Is the music playing now through the Ambeo?

Hmmm, I may have missed this, but can you play music to it via AirPlay using a Mac or an iOS device?

Yes, I can play music to it using Apple product

Thank you Eddie. I am tagging @support as I am running out of ideas.