No Windows / Ubuntu endpoints after 880

Since update to 1.8 880, my PC (Windows 10) soundcard and the audio devices on the core does not appear as endpoints. I can see the Squeeze boxes and Chrome devices. Rebooted several times.
Working fine before update.
Can we rollback the updates??

1, same problem here. After updating to 880 (and between the constant DB rebuilds and server crashes), I have no end points for my Mac clients or RoonBridge devices (RasPi 4 running RoonBridge and Ropieee). Strangely they show up as active audio devices in Setting but they aren’t available to stream: 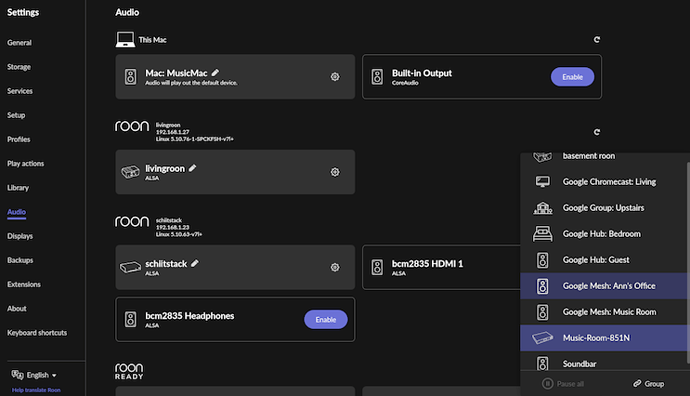 As mentioned in this thread – 880 Constant Server Reboot on Synology 218+ – I can get the RoonBridge devices back by rebooting the Pi devices but only for a minute until Roon crashes again.

Some endpoints are coming back without issue after a Server crash: Google, Cambridge 851N, and HifiBerryOS.

We’re so sorry about the trouble…

I wonder if you’ve had a chance to reboot your network (router & modem), audio devices and Roon Core. Is there a change when you reconnect them?

Try turning off your firewall temporarily and see if that is causing the issue.

After many attempts at disable / enable the audio devices in Settings, the Windows endpoints started to appear in the Zone selector (bottom right, next to volume).

This should not happen with ‘paid for’ software.
Rebooting routers, disabling firewalls, should not be required.

Feels like every time there is an update, part of the Roon setup must be reconfigured.
Glad I wasn’t affected by the database corruption.
AS an aside, reading the release notes for 882, the suggestion of ‘latent corruption’ of people’s hard drives causing so many problems sounds highly implausible. Verifying the database integrity before upgrading it should have been in there from day 1.