I have a notable number of albums which contain multi-part works where the parts of the work appear not consecutively - out of artistic intent I guess. It’s quite common with choral music albums and also with albums focussing on an instrument and the works written for it. Roon regularly fails to understand that those parts are all from the same performance of the work. Instead it “messes around” with the performance count.

If Roon knows from it’s own metadata and/or file tags that it’s more likely that movements of a work stem from a single performance than not – even so the parts appear in between other works / parts / tracks within the same album – it would be nice if it would indeed count those as a single performance.

Don’t exaggerate my collection statistics - that’s up to me…

Roon regularly fails to understand that those parts are all from the same performance of the work.

This somewhat understates the difficulty and nature of the problem. It’s not so much a case of understanding, but a case of what the metadata tell us, both directly and indirectly. In your Mozart horn duos example, we receive different performance IDs for these tracks and we honour them. There are a number of reasons why performances might be considered as separate: typically, we see this where movements are partial and/or out of sequence and/or where there’s simply not enough evidence that the parts were performed at the same time in the same location. Just being on the CD does not guarantee that the composition was actually recorded as a single performance.

For every “obvious” case you can show me, I can show you a counter-case where making the same assumption about “same performance” would be wrong (and often objectionably so). There are many examples of classical CDs where there are multiple different performances of the same composition next to each other. Similarly, two tracks called Flamenco Sketches on the same CD with no other differentiating information absolutely should not be treated as the same performance of the composition. Multiple takes are extremely common in Jazz and are different performances.

So can Roon do better? For clearly ordered parts on contiguous tracks, we can probably make some sensible assumptions. However, attempting to figure out if out-of-sequence composition parts, non-contiguous tracks, or “same name track duplicates” are part of the same performance is simply not on the cards, not now, and probably never.

If it bugs you that much, we already provide the WORKID file tag which is used in conjunction with WORK and PART tags to differentiate performances of the same composition on the same album.

Well, the statement quoted implied that software understands things. It was not directed at the know-how the Roon team puts into making that software. Just to get this clear. Sorry for not putting it into better words before.

The case I tried to make was really only this one:

give enough indication that even if the parts are not appearing one directly after the other or are out of sequence the Roon client-side software implementation could assume it is one performance and not multiple ones.

PS:
The WORKID tag doesn’t want to work with me in the way I thought it would. I’ve tried to add it with a value of Single_Performance for the Horn album’s K. 487 movements but it didn’t change anything. Probably I did something wrong or WORKID as an mp4 atom doesn’t get recognized. Roon shows the file tag but nothing else changes. So be it.

If it bugs you that much, we already provide the WORKID file tag which is used in conjunction with WORK and PART tags to differentiate performances of the same composition on the same album.

@joel based on my experience, WORKID works to split two performances of the same composition on one album into two but it fails to combine one performance which is interrupted by another

both are performances of Israel in Egypt, interrupted by a performance of and Organ Concerto by Händel. When I use the metadata provided by Roon I get a split in the main performance, but also when I change the settigs to prefer file and set the WORKID tag uniquely for Israel in Egypt, it still won’t count as one performance
This behaviour is independent on the identification of the album. 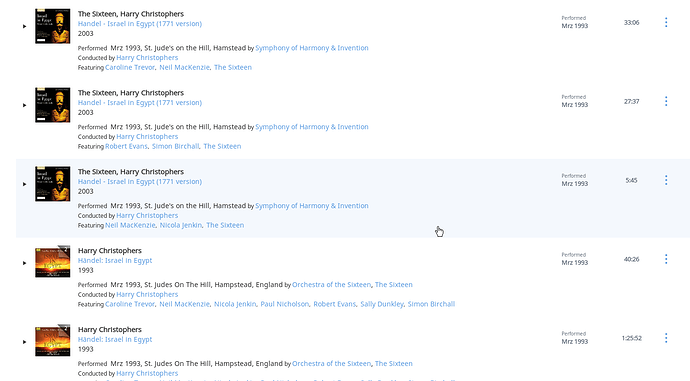 Thanks for confirming this. Now I know at least that it’s probably not worth more time trying to get WORKID to do what I want it to.

Are you both using WORK and PART tags in addition to the WORKID tag? 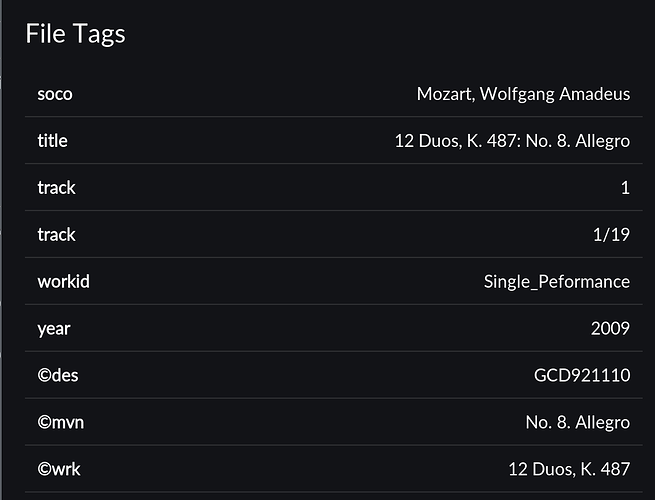 That seems to work fine as such.

Note: to be sure I’ve also added an uppercase workid tag to that particular file so that’s surely not the issue.

for a single file

Are you both using WORK and PART tags in addition to the WORKID tag?

would it be correct to assume that you’d expected Roon to consider these tags? Is WORKID supposed to work both ways?

I had, but I’m not 100% familiar with that code. From what you are saying, it appears that it won’t pull the performances together. We would need to investigate further.

At the very least Roon should interpret ©wrk as WORK and ©mvn (movement) as PART for Apple lossless ALAC files, as that is the only way to enter that metadata in iTunes (a relatively new feature).

I think Roon reads those tags.

I think Roon reads those tags

Right. I needed to make the “Composition/Part Grouping” preference change to prefer file in Import Settings.