Since resolving the issue in my previous thread, the same thing also happened yesterday and the day before. Just now music stopped again. This time the Sony DAC is still visible as being connected to the Nucleus Core, and it looks like it’s playing ie. the graph motif is moving about next to the track name. But there’s no sound and the track choice keeps changing every 30 seconds to the next track on the current album although the time counter stays at 0:00 . This happened yesterday as well.

Here’s a pic of the DAC settings: 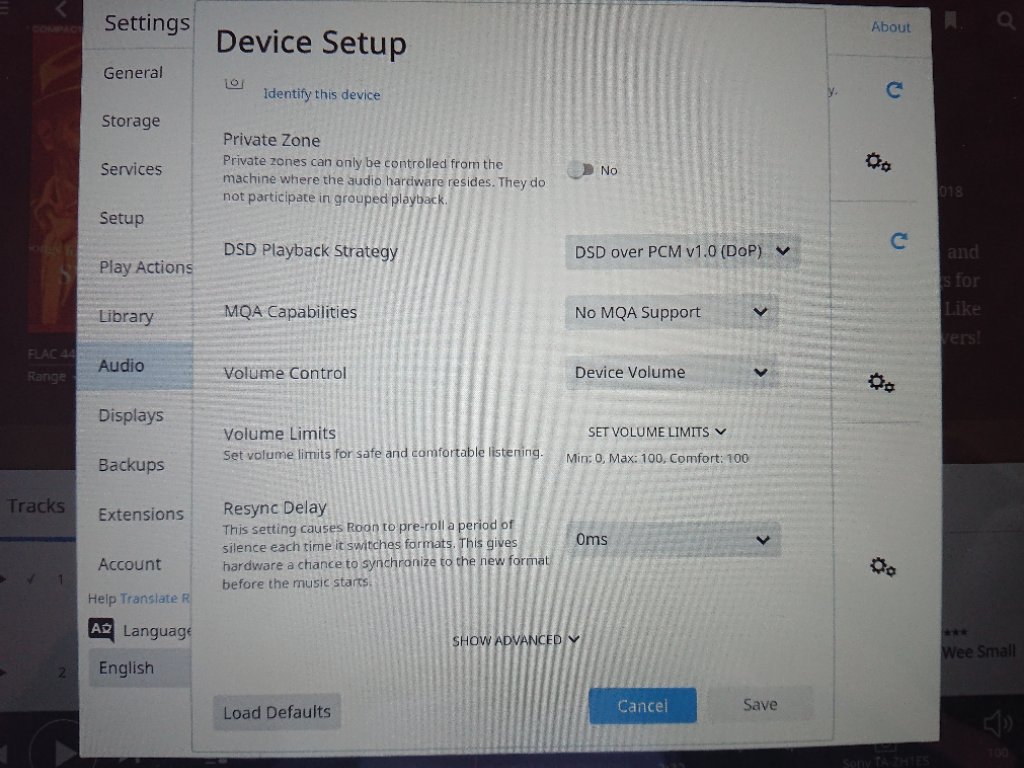 I’m not sure if it’s anything to do with switching formats, but I do have a lot of DSD and regularly switch between FLAC 16/44 and DSD. @Geoff_Coupe thought it sounded like a USB DAC issue so I’ve posted the settings above.

Could you also post a picture of the Advanced settings (click on Show Advanced, and then scroll down to show the settings)? The more info the support guys (@support ) have, the better… Thanks.

Ah I pressed Advanced but as the screen didn’t change I didn’t realise extra settings appeared if you scroll down. Sorry about that. Here they are: 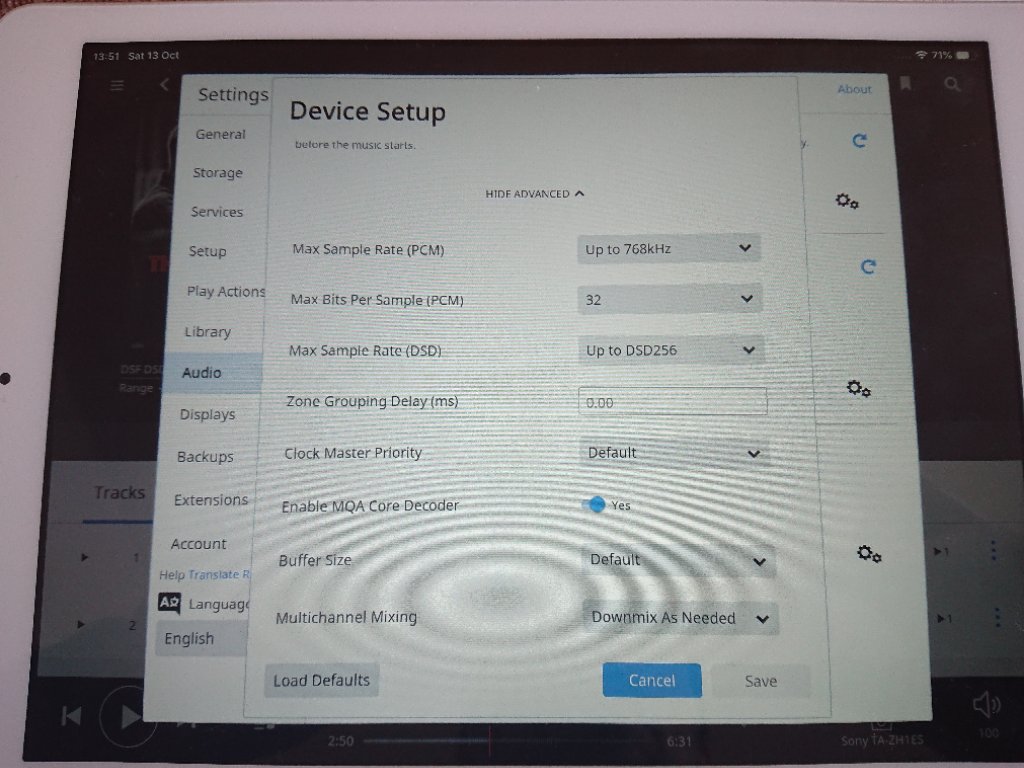 If you’ve noticed issues when switching formats, try adding some resync delay. Start with 500ms and see if that helps.

Thanks, I’ll try that. The issue doesn’t happen frequently so I might not know whether it’s made any difference for a day or so. I’ll let you know if it doesn’t work.

As andybob mentioned above, resync delay is definitely a good place to start.

Can you share a screenshot of your signal path when playing to this device? Also, can you confirm the model of the Sony DAC you’re using?

When this device is in this state, if you switch to a different zone (directly to your remote device) does the same behavior occur, or is it just with the Sony DAC?

If this behavior occurs again please note the time that it occurs and pass it along. We can enable diagnostics on your account and take a closer look at what you’re experiencing.

The model is: Sony TA-ZH1ES

When it happens, I can still play music through the Chromecast Audio analogue output which I have plugged into my amp, but the Sony DAC and HDMI outputs on Nucleus dissappear until I power cycle the unit. Having said that, I’m not 100% sure if I’ve always been able to use the CCA or just sometimes. 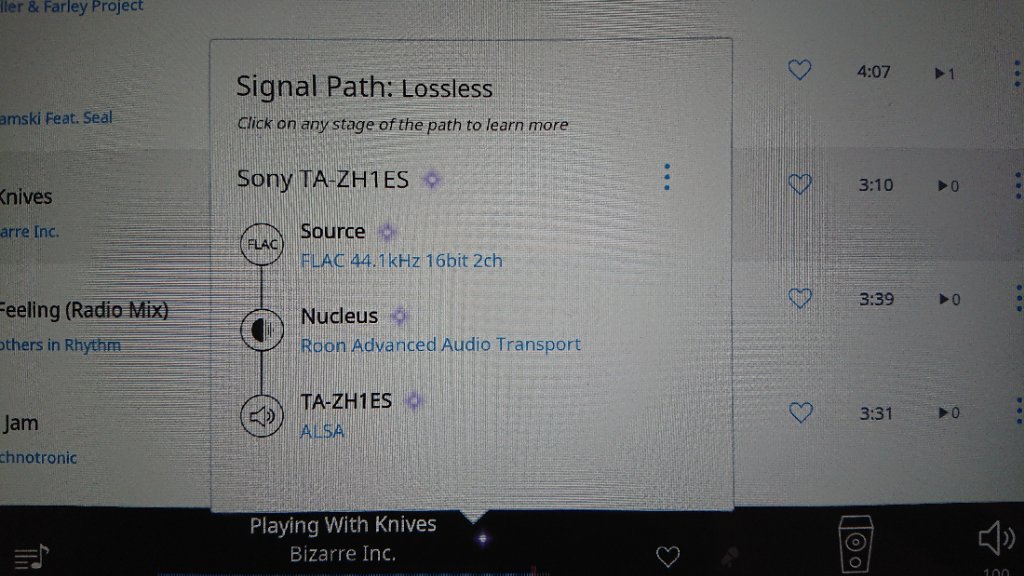 When I play DSD there’s another stage called Encapsulation that comes in between RAAT and the DAC.

I’ll make sure I note the time if/when it happens again.

but the Sony DAC and HDMI outputs on Nucleus dissappear until I power cycle the unit.

The HDMI output disappears as well as the USB connection used by the Sony DAC? That’s, erm, interesting…

Been playing all day today and had no issues apart from the iPad losing connection to the Nucleus once. Updated to the new iOS 12.1 and it came back right away.

That’s because it’s likely using DoP rather than native dsd. It’s likely native dsd is not supported on the dac using Linux. Likely windows only. You can check in device settings as it will have options for DSD. 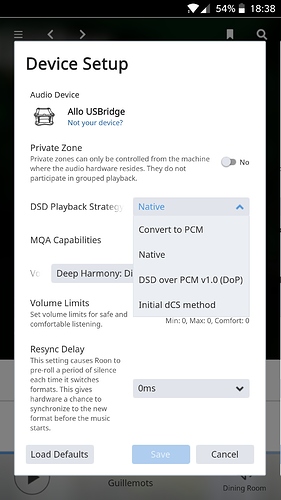 Yes, I’m using DoP because every DAC needs to have a special driver written for it to use native DSD with Linux and my Sony does not have one. My Sony DAC does work with Native DSD on my Windows laptop and Sony Walkman though, up to DSD512. So everything is setup correctly as you state.

Hi Dylan, Just had a crash at 7:58pm UK time. Was playing a FLAC file and accidentally clicked on a DSD64 track and things just stopped. Both Sony and HDMI vanished from the Nucleus menu shortly afterwards, after I Refreshed the menu to see if I could get it playing again. Still able to play via Chromecast though. 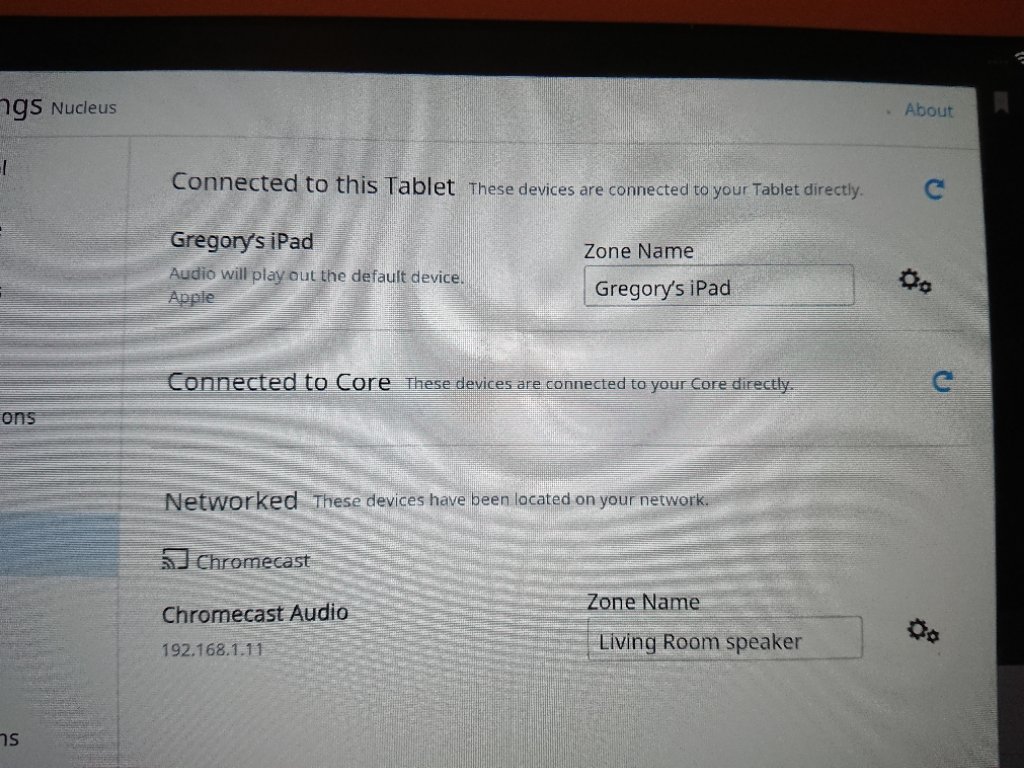 Hi, here’s an update: Just power cycled my Nucleus for the first time since the crash at 7:58pm last night. It’s been fine playing via the Chromecast today. But just now I power cycled it (6:58pm tonight) so I could try to use the Sony DAC again and a new problem occurred. When I pressed play, it raced through the track selections and didn’t play any music. That’s the first time that’s happened since I’ve had the Nucleus here. This is very similar to behaviour when I was using my laptop previously.

Thanks for the update, @Woo, I’ve passed your latest information over to the team as well. I wanted to confirm that the diagnostics report was received and is under review by the technical team. I’ll be sure to update you as soon as I’ve received their feedback.

Thank you so much Dylan

Another crash just now at 13:59 UK time. Playing a Tidal track already, then just pressed play on a different one and it crashed.

I think I’m starting to notice what causes it. It seems to happen when I press Play when another track is already playing. So it seems I have to press Pause before selecting a new track/album, or else it crashes and the Nucleus Core loses the HDMI and DAC connections requiring a power cycle to solve it.

Thanks for the update, @Woo — I appreciate your patience while we are investigating what you’re experiencing here.

Thanks for the update Dylan, even though I’m having issues I’m still really enjoying Roon here and I’m sure the situation will be clearer once the team have figured out what’s going on.

Hi, Just had another two crashes in the space of a few minutes. Racing through the tracks rapidly like before and requiring a reset. Any thoughts yet on what to do guys?