I’ve read numerous posts regarding slower response of Roon including: errors of slow performance, pressing on play on a track and nothing happens, or with substantial delay, artist information not appearing when due but sometimes later or not at all. I have the impression that these issues rose to prominence with previous updates, but who knows.
People have suggested all kind of things, from trying to pin-point a faulty endpoint, network wiring, and obscure network settings beyond comprehension of many.

I have all these issues, and I’ve found for me a possible cause but no solution. In short it goes like this:

*A few facts: I’ve tried rebooting the Nucleus core+, sometimes it seems to help, but as the problems are intermittent, who knows what the effect of rebooting actually is. Definitely not a permanent solution.

All the best and thanks!!

Thanks for reaching out and for providing the troubleshooting you have done so far.

As a starting point, I would try connecting the Nucleus back to the router for the simplest network setup configuration and verify if the same issue occurs when you try to output to the Nucleus “HDMI Output” port.

Even if there is nothing connected to the HDMI port, it would be a great data point to know if you have playback delays there (the progress bar should provide this clue).

Also, can you please provide the following additional details?

These questions should help get the ball rolling towards troubleshooting this further, so do let me know your results when possible!

Hi @Rodrigo_Salgado.
Two questions: Why do you need the powerline adaptors for the satellites ?
I also have a Orbi system, running in AP mode. Have you turned off the wireless on your ISP router?

I forgot to specificy this. The Devils Powerline adaptors are not for the satellites. The ISP router enters my house in the garage. In order to have a stable connection to the farthest points in my house that require a fixed access point (desk computers for work), I originally installed these Powerline’s. They provide a very stable connection.
In the past, I used to bridge the distance between my garage and the living room with a Powerline adapter, plug in my Orbi router to a Powerline access point in the living room and wireless distribute the signal from there. Afterwards a figured that it wasn’t necessary by optimising the position of the satellites.

Thank you for your speedy reply.

I don’t have the impression that the endpoint does make a difference, but I will triple check and get back to you.

As said, I will get back to you as soon as possible regarding the HDMI question and the endpoints. The difference in performance when switching cores is striking. What I also could do is plug the Nucleus to the same switch as the Mac and then see what the performance is. That way both cores would be on the sample location in the network. What do you think?

Thanks for your help,

Also one addition, also replied to Larry: the Devolo Powerline are all connected to the Orbi network.

Try turning the WiFi off on your ISP. You might be running into interference between the ISP and Orbi channels.

Not impossible but very unlikely I think. The Naim Atom, Sonore Ultrarendu as well as the Nucleus are through a wired connection. Also, when I switch cores all problems go away. Every other device in the house works fine, just the Nucleus+ is stubborn. Will give it a try though, and get back to you. It shouldn’t be so that I have to switch off the wireless signal of the ISP just to get a singular device to work fine, while all other devices are unaffected.
Thanks for your your help, and will give it a try anyway.

Again, thank you for your support. I’ve done the following tests as you also suggested:

All these devices are connected, as the Nucleus+, to the Orbi network

Hope you can help me,

Thanks for checking the behavior further. Since this issue is affecting multiple endpoints and when the Nucleus+ is connected either to the switch or to the router directly, I would advise performing an OS reinstall on the Nucleus to see if that will help.

To do so, you should first create a Backup of your current Roon database (just as a precaution) and then open the Nucleus Web UI and press the “Reinstall Operating System” button like so:

Can you let me know if this helps with the issues?

Thank for your suggestion. I tried this, and will see how it now behaves during the day. I’ll get back to you later on.

I’m sorry to say that this didn’t make much of a difference. The error and less performance are still there. What could be important is the following: 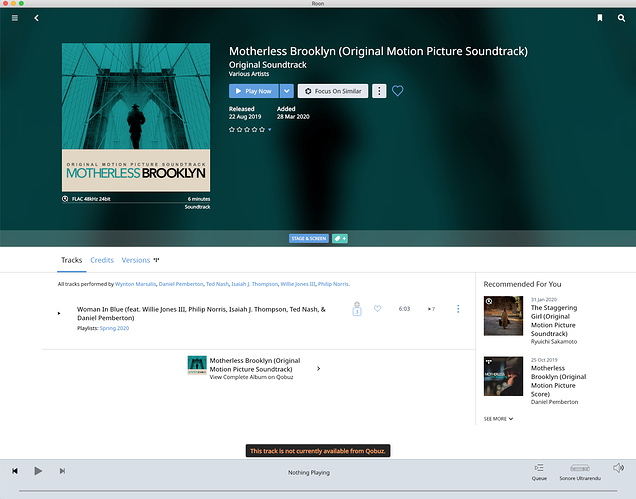 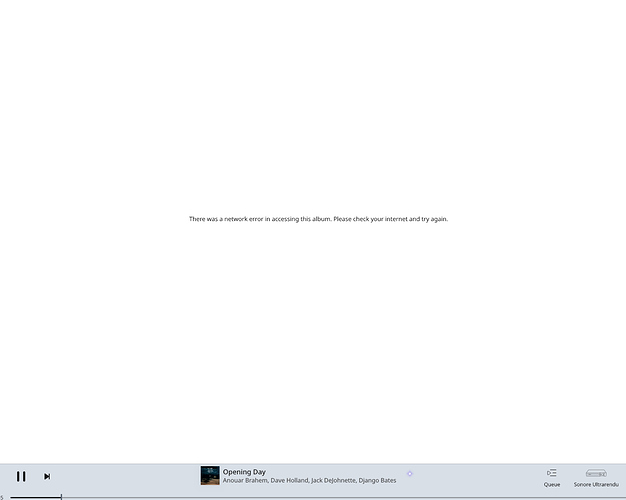 Finally, and this is something I recently remarked: sometimes I have a track that is highlighted for no reason (as the track King Kutner in the following screenshot). 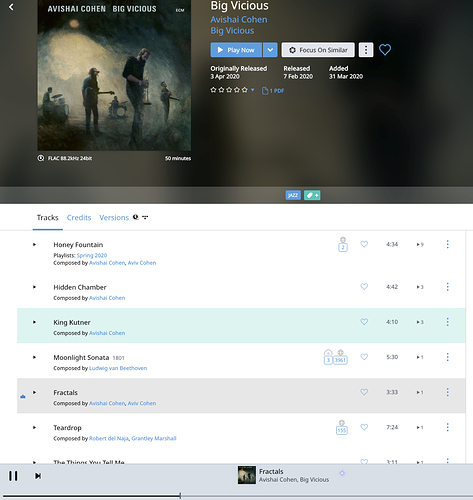 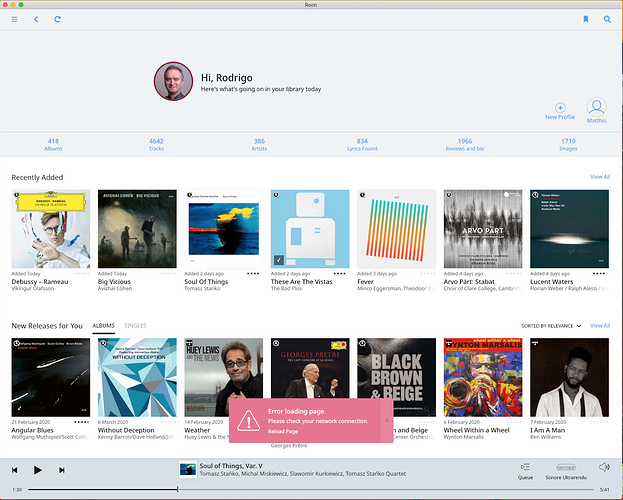 For the record, I can enjoy Roon with Nucleus for hours at end. It’s just frustrating to have buggy system having a Nucleus which was bought explicitly to have a no-hassle experience.

All the best and thanks again for your help,

I propose we next test what the behavior is like on this Nucleus with a fresh database in place. Can you please use these instructions to set the current database aside and verify if the Nucleus performs the same way with the fresh database and just TIDAL + Qobuz?

Thank you for your suggestion. Well, this seems to have done something right. I implemented it very late yesterday and saw a clear improvement in performance, Roon was a real pleasure to use. I stress-tested the system and got only one brief “network error”.

This morning during breakfast I also played around and found to obvious performance issues. Especially the overview and the discover features are much quicker and consistent now. Also, so far, no issues ion playing tracks. Most of them start instantaneously, some after a brief moment, but no errors so far.

I have to say that your previous suggestion to restart the Roon OS also seemed to improve performance, but didn’t get rid of the several errors I mentioned in my previous post.

What I will do is the following:

Sounds like a plan @Rodrigo_Salgado, do let me know how testing goes!

Sadly, things still aren’t solved. While i have the impression that since performed a reset overal speed has gone up, I still have networks errors. In short, I have the distinct feeling that at given moments the Roon system/network connection/whatever can’t make a proper connection for a few seconds and start generating errors. More often than not (indeed, not always), after a few seconds the selected songs starts to play even with the original error message still on screen. In a similar fashion, when I look at the Tidal and Qobuz tabs (so no my content library but the welcome screens of those services with their playlists and so on), the first time it can take a while to fill-in the content (with error messages sometimes). If I repeat this action after a minute or so it shows everything as it should be at a normal speed.

I repeat, all of these problems (all of them) disappear when I switch to my Mac mini as core.

I have my Netgear Orbi router in AP mode after my ISP router, so the ISP router distributes the IP addresses. Would it be worthwhile to switch the Orbi to router mode? Or to connect the Nucleus to the ISP router and see if on that network (which I don’t use) the problem persists? Again, the Mac mini on the Orbi network gives me flawless performance as core. Also, the Nucleus is the only network device that is giving me problems on the Orbi network.

Finally, I’m willing to do a complete reset of the Nucleus if you think that could be useful. I don’t have so many custom playlist, so I would be totally fine with that.

Please your advice, and appreciating your continuous support!

@Rodrigo_Salgado. The first thing to try would be connecting the Nucleus directly to the router.

Finally, I’m willing to do a complete reset of the Nucleus if you think that could be useful. I don’t have so many custom playlist, so I would be totally fine with that.

We have already done a complete reset of the Nucleus with the OS reinstall and setting the database aside, so this behavior is likely due to something else such as the network setup.

I have my Netgear Orbi router in AP mode after my ISP router, so the ISP router distributes the IP addresses. Would it be worthwhile to switch the Orbi to router mode? Or to connect the Nucleus to the ISP router and see if on that network (which I don’t use) the problem persists?

I would not use an ISP-provided router to perform the management of your network. Instead, I would change the ISP router/modem combo into Bridge Mode (which essentially turns it into just a modem), disable the WiFi on the ISP router and have Orbi handle the IP routing.

The first thing to try would be connecting the Nucleus directly to the router.

Before you make these network changes though, you may want to try bypassing the Orbi router and connect the Nucleus directly to the ISP one just as a test, as this would be easier than re-configuring the network as the starting point.

Yes that was what I was suggesting. My set up is having the ISP router with the wireless off and the Orbi in AP mode. Nucleus connect CAT6 into the ISP

First thank you so much for all your help and suggestions, which unfortunately have not brought a solution. I’ve also think that the last proposals of switching router modes or connecting the Nucleus+ to the ISP modem make sense, and I will certainly try this, but not now.

I’ve decided to temporary stop searching for a solution for the mentioned network problems. As mentioned, I can enjoy Roon despite the technical issues and will temporarily accept these quirks.
But mostly, I think that it shouldn’t be this hard to get this system running without issues. The Nucleus+ is the only networked device I have that gives me problems. ALL my other devices work perfectly and live happy in my Orbi-generated network. So to go through all these changes just to get one device (the Nucleus+) running smoothly while all the rest poses no problems is just wrong in my humble opinion. I know that these issues didn’t exist when the Nucleus was first bought, so maybe between then and now something has changed (I seem to remember this appearing after an update). But who knows? For the moment, I give up and will enjoy Roon and Nucleus as always, but it’s fair to say that I wish things would have been different.

Thank you again and all the best,