Hi Eric,
Sorry to be the bearer of bad news, but unless the installation went horribly wrong I’m now getting a kernel panic after the reboot.
Thanks
Mark 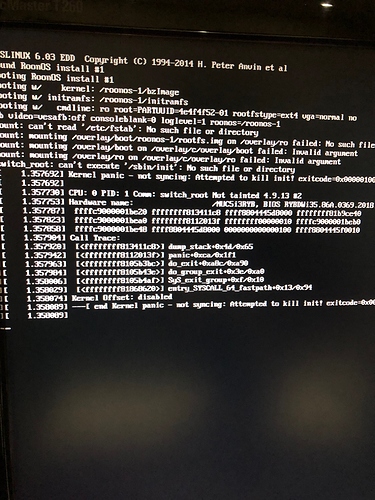 My issue is probably because I’m using an NVMe

My issue is probably because I’m using an NVMe

You’re running a fifth-generation NUC, instead of the seventh.

There were some discussions about NVMe issues with this generation:

@John_Webb did you solve the NVMe problem on your NUC5i5?

I’m afraid not. I heard from some other users with 5th generation NUCs. A few were using M.2 SATA drives, which are no faster than my 2.5 inch drive. One was using an M.2 NVME drive successfully though I think with Windows not Roon. He said it was an Intel 600p. I’ve thought about trying one of those but they are a bit more expensive than the one I had before, so I’ve just kept using my 2.5 inch drive.

There is no success report of using fifth generation NUC with NVMe for ROCK that I could find, and there does not seem to be a clear solution without hardware change for the two threads I posted earlier. Based on this assumption, I think there are two ways to move forward:

In case @eric has other suggestions, they would supersede mine.

As other people have commented in the thread, it is likely the NVMe drive mixed in with the 5th Generation NUC that is causing the issue and while some people may have reported success, most people have not. Just so you are aware, at this time NVMes are not on our list of supported hardware to run ROCK on and I am not sure if we will ever support it as Danny mentioned in this thread:

I’ve seen people complain about that Intel SSD – it isn’t mounting/booting for some reason I can’t investigate unless i have the drive. I’ve not gone out and bought one because it’s not that common of a drive, and we’ve made the list of drives we recommend clear.

With that said, you might want to check out these threads for more information:

Oops! It seems I did not do my homework properly. I could not find any referral to NVMe when I checked the SSD 600P Series specs earlier, but I must have overlooked it somehow. Sorry! Does this mean the solution for my kernel panic problem is buying another SSD? In the topic I referred to in my original post Danny Dulai suggests this might be the solution in that situation, but I cannot find a clear confirmation of his assumption.

I have been running Roon on a MacMini for about a year now, initially connected directly via USB to my DAC, for the last six months through ethernet to a SonicOrbiterSE (and then to DAC). All my tracks are on a NAS, about 1500 albums…1000 are redbook rips to FLAC, about 500 are hires mostly 96/24. For a while I’ve been wanting to take the Mac out of the system and repurpose it elsewhere. I was intrigued by the SonicTransporter but after some poking around here and advice gathering, I decided to…

If you do manage to get it up and running, do let us know as we would love to hear a successful outcome to this situation!