I’m having an issue with static and sometime what seems like signal drop out during playback. It only lasts a split second but it quite annoying. Probably happens once or twice per song.

This issue only started happening a month or so ago. Never noticed it before then.

The only thing using significant resource on the laptop when the issue occurs is Roon. About 46% Ram used, CPU utilisation spikes up to about 40%.

Any ideas for things I can try?

Could you post screenshots of your Settings > Audio screen and your Signal Path?

James, what is the actual processor spec of the dell i5?

Also what bitrate files are you playing typically? 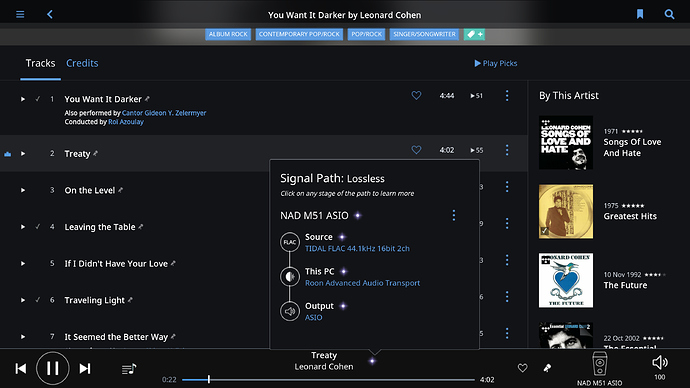 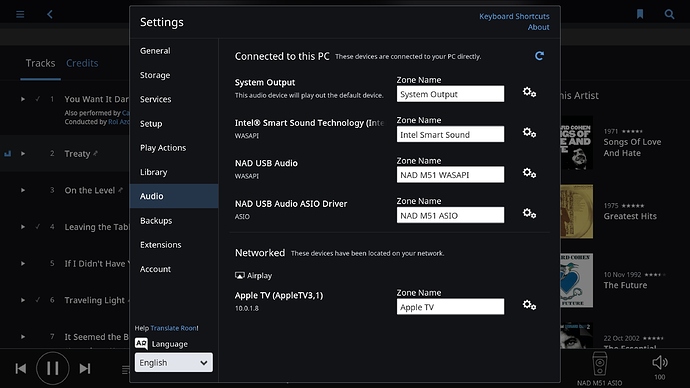 That spec looks OK for your setup and bitrates

I’ve added the Roon app folder, and roon.exe and RAATServer.exe processes as antivirus scanning exclusions in Windows Defender to see if that helps.

Today I’m going to use Foobar for a while and see if the problem happens there. Would potentially eliminate USB cable and / or DAC as culprit.

Hi @James_Sinclair-Lockh ---- Thank you for the report and sharing this observation you have made with us. The feedback is very appreciated!

After having read through your posts, I would definitely recommend testing with another USB/DAC as you have mentioned here

Additionally, can you please verify for me if you experience this behavior when using a different audio zone all together?

Lastly, do you notice any patterns in behavior which may be influencing the “occasional static” you are hearing? For example does this happen when playing back all formats?

From my testing today I got zero issues with Foobar. I couldn’t test Tidal with Foobar, but the CD Rips were fine.

I’ll try another USB cable, but the fact that it wasn’t happening with Foobar makes me wonder if it could be the cable. I don’t have another USB DAC available, although my Micromega amp has wireless Airstream capability and built in DAC for the wireless connection, and appears fine (when using Airstream protocol).

So it’s starting to point at USB + Roon at this point.

Thank you for the follow up and taking the time to provide the requested feedback @James_Sinclair-Lockh, very appreciated!

Continuing forward, while it may seem a touch elementary, during your troubleshooting of this behavior have you tried rebooting not only the core machine but the DAC as well? If so, what was the experience like? Additionally, if you bypass the M51 (temporarily of course) and play directly out of the internal speakers of the core machine do you notice the static sound?

Furthermore, are the firmware/drivers completely up to date for the M51?

The DAC and core have been restarted many times, and the problem remains.

I haven’t played music out of the speaks of the Dell XPS laptop for a long time, but I will try it and get back to you. I can tell you that the Dell has always had a static problem when listening via headphones - occasionally after 5 or so minutes of listening there will be continuous static - quite a different type of static to the problem that we are trying to solve in this thread. But USB DAC listening has always been good (up until a month ago) so I just accepted the other issue and moved on. I only really bought the laptop for use with the DAC.

I am not sure if the M51 firmware is up to date. I remember checking a couple of years ago. I’ll look at updating it.

Hi @James_Sinclair-Lockh ----- Thank you for getting back to me in regard to what the experience is like when playing content directly out of the laptop. Your continued insight has been very appreciated!

I wanted to touch base with you and see what you discovered in terms of the firmware you have in place for the M51. Looking forward to your feedback!

I had forgotten that I had updated the Dell XPS 13 system BIOS a month or so back.
I decided to roll it back this morning, and guess what? No static / signal drop out!

I probably need to monitor it for a few more days, but it is definitely looking very positive.

Just in case anyone else has a Dell XPS laptop, here are the details:

As per your request, I also checked the NAD firmware version. It is a little behind at version 1.43 (most recent version is 1.50), however I am currently of the mind, if it ain’t broke, don’t fix it. Maybe in a week or two I will try updating the BIOS again and NAD firmware to see if that is a stable combination.