I downloaded the track “Feel It Still” by Portugal The Man from iTunes and copied the file to my Salkstream streamer (houses my music collection and Roon Core). When I use Roon to play, it distorts badly like the level is too high and clipping. Playing the same track on my iPhone using the native music app it doesn’t distort. Also, using AirPlay (the Salkstream has AirPlay) it doesn’t distort. I also tested it using my Oppo 103 to access the file on the Salkstream and it played fine without distorting. It’s only when using Roon that it distorts.

Any idea what’s going on here and how to fix it?

Btw, none of my other music downloaded from iTunes does this.

Thanks for sharing your report with us, @Saturn94!

So we can better understand what you’re experiencing here, please verify the following:

Thanks for the quick response. I’ll try to get answers to your questions this evening after work. 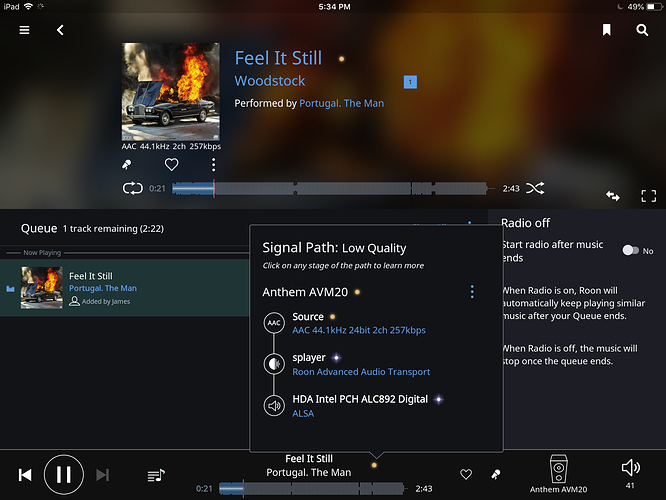 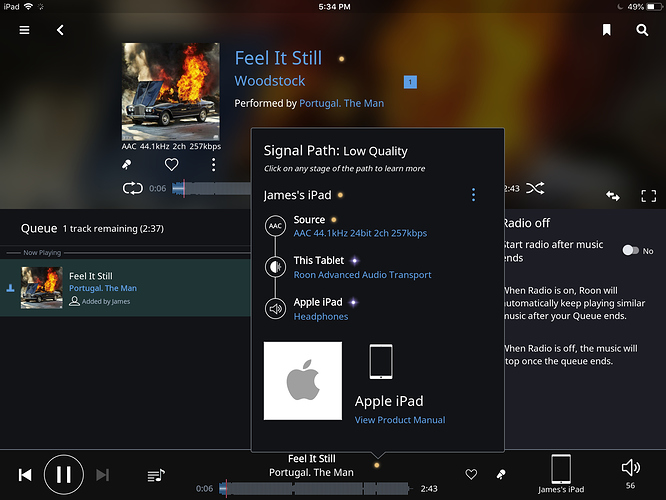 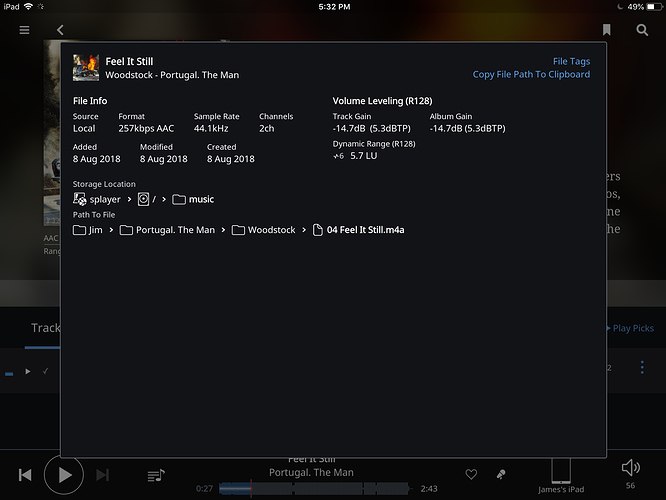 Like I mentioned, if I use the media browser in my Oppo 103 to access the file from the Salkstream, it plays fine, which seems to indicate the file is ok and not corrupted. The same file copied to my iPhone also plays fine using the phone’s native music app.

Based on the information you’ve provided above, it sounds like you may be experiencing an issue we are currently working on a solution for regarding the playback of AAC files, though this typically effects all AAC file playback. Though we are working on a solution, some have found more immediate success by update FFMPEG, as discussed in this thread.

To confirm whether or not that is the behavior you’re experiencing, I’d like to propose a test. If you have a Windows or Mac device you can temporarily install Roon on and use it as a Core, does it exhibit the same behavior, or is it only with the Core you’re currently using?

Thank you for the info. I read the thread you mentioned and it does sound like the same symptoms mine is experiencing.

I posted there with a link to this thread in case it’s helpful. I got the impression Roon Support is aware of the issue and is working on a fix? Is this correct?

I’m not computer savvy so I may wait for a fix from Roon rather than trying to update my streamer myself (eeek!). Also, I won’t be able to try the test you suggested for a bit, but Im pretty confident reading the other thread that my issue is the same.

I got the impression Roon Support is aware of the issue and is working on a fix? Is this correct?

Yup, should be live pretty soon.

Btw, I’m finding more files in my collection of the same kind exhibit the same issue. I think it varies in intensity between aac different files, which may explain why I didn’t notice it when I briefly tested some others.

I wanted to reach out because we just released a new update that addresses this issue. Please update to build 339 and let us know if you have any issues.

You can read more details about the release here:

Hi all, With work underway on a number of exciting new features for the coming weeks and months, we’ve got some bug fixes tested and ready to go, so we’re shipping a maintenance release of Roon today for Windows, macOS, and Linux. This release is rolling out now, and includes a handful of bug fixes and performance improvements, including a fix for distorted playback on Cores running older versions of ffmpeg. The full list of bug fixes is below. Thanks all! The Team at Roon Labs Roon 1.5 (Bu…

Thanks for the heads up. I’ll report back when I get a chance to update and test it.

I finally got a chance to update and try a couple aac tracks, which played fine.