The first three Peter Gabriel albums are available in MQA on Tidal but they won’t show up or be transferred to Roon.

Is it a matter of time or something else?

I’m having the same issue save for Peter Gabriel 1-4 and So are showing MQA in Roon. Us, Secret World Live and Scratch my Back… all will not save as MQA to Tidal. All Albums are saved as Masters to my Tidal account. MacBook Pro Catalina. Thank you.

Same for me, I just mentioned the first three. Should of been a little more thorough.

Just pulled up his Tidal albums in Roon in the US. Saw 10 MQA albums and was able to add all of them to my library. Playing Scratch My Back now.

Canada here also. MQA versions are available and play in Tidal app, but won’t import into Roon. They are also not available in MQA when searching Tidal from within Roon. Strange.

Have any of your checked the signal path?

Having similar issue with Qobuz hires for his albums. None show as hires but when I check the path, it actually is. Something’s wrong with the metadata.

I had the same problem with the mqa versions of Peter Gabriel. They dont show as mqa but the signal path says it’s mqa. Some of them also dont show as new albums but hide under the versions tab.

Yes, and I found another bug: When you are on the Peter Gabriel performer page, you can choose (Performer/)Composer, but if you click on Composer (or land there in the first place via search), you’re stuck. Anyone else see this?

I can open the composer page, i can also play the MQA albums but i had to add them in Tidal first.
I am in Norway by the way 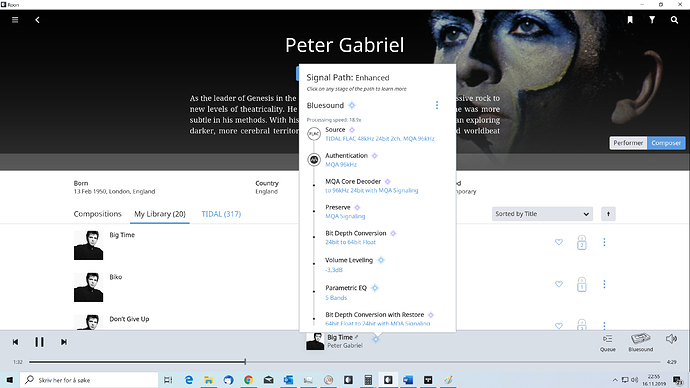 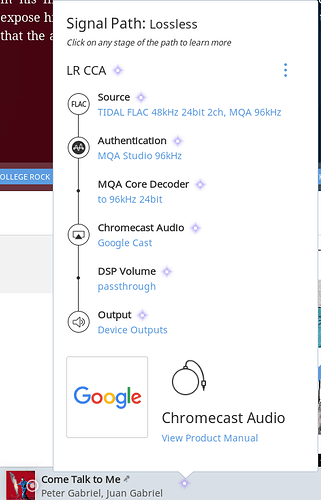 Please note I’m playing to a Chromecast Audio endpoint at the moment so all I get is Roon’s unfold but the Signal Path shows the track is recognized as an MQA track and authenticated and decoded as expected.

Having the same problems here in Toronto. No Peter Gabriel MQA is showing up. I have already saved it to my favourites.

Roon often lags TIDAL by a day or so. This is mostly down to the speed in which TIDAL share data with Roon–there are posts about this elsewhere in the forum.

As many have discovered, marking as favourite in TIDAL will bring them through to Roon within an hour or so.

That’s usually the case, but I added it to my favourites over 30 hours ago. It’s also not showing up for me in the TIDAL “What’s New” section in Roon.

It would be nice if there was a simple answer to this problem but I have tried everything that would allow the transfer of these MQA files during that last couple of days. I’m hoping that they will somehow appear over time or roon looks into it on our behalf.

Does the 96kHz play normally for you via Chromecast? There are threads about a Chromecast Audio stutter / dropout issue at 96kHz.

No problem playing 96kHz material with my Chromecast Audio devices ( I have 3 ) using the analog output from them. I did have some problems when I tried using an optical digital connection to a Samsung soundbar but I switched back to analog and have not had any more issues.

I’ve seen some posts saying the issues have been resolved / minimized with recent firmware but I have not tried to use the optical digital connection again. Primarily because I moved the soundbar to another room where it is used infrequently.

As far as I can tell, the firmware related general problem is resolved. Works here on optical out without stuttering since months. Remaining individual problems may be related to network (WiFi) problems or bad optical connectors/adapters.

Interesting … Having just had some dropouts with ROON resampling 24/96 to 24/48 on the one of the CCAs I was using to test before, I eased the mini Toslink out a tad and that cured it. Took off the resampling in ROON and now playing beautifully at 24/96. I’m currently using a cheap Fisual Pro Install cable as I am not convinced about high cost cable especially on optical, but then the Fisual is by far cheapest I’ve ever used on anything. I wonder if the issue is with the cable or the socket ? W…

The albums will show up in your library not what’s new with this workaround.

8 MQA Peter Gabriel albums showed up under “whats new” this morning here in Norway, guess we just have to give it some time. 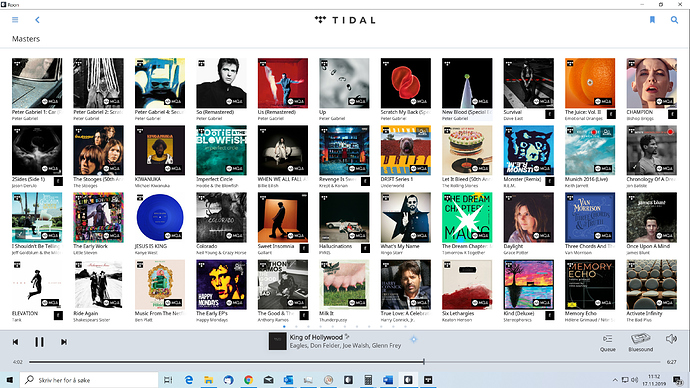