Pinwheel of Death on MacBook Pro

I can still control from my iphone, but MacBook Pro now shows pinwheel since searching for a some-what obscure composer, Charles Villiers Stanford. Stanford was Irish, but I hope that has nothing to do with Roon’s performance here. Perhaps he is not to Valence’s fickle taste? Perhaps I digress. I tried deleting and reinstalling the Mac OS app on my MacBook Pro from the Roon website (twice) but no improvement. Each time I “force quit” and reopen the app on my MacBook Pro, I get the same screen and after a moment, the pinwheel. MacBook is on wifi, but signal is very strong. If the fault lies in my musical taste, I commit to try to improve once my faculties are restored. Thank you. 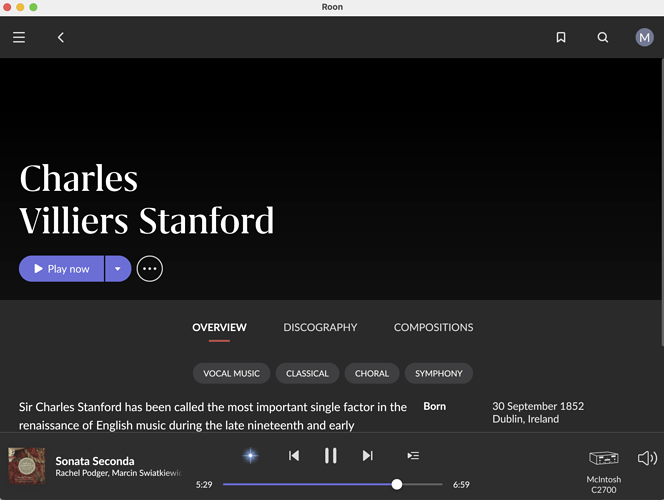 And my apologies if I have offended Valence. I suspect she is always listening.

Nucleus and MacBook Pro on build 778 - the search works fine on my MacBook Pro, macOS Big Sur 11.2.3.
It is even playing some of the music found now.

Same Mac OS version here. It had been working fine until I did a search for Sir Stanford (He was knighted in the 1902 Coronation Honours ). Frankly, he deserves better than this. I am prepared to hold Valence responsible until I am convinced otherwise.

I kept getting the pinwheel of death last night whenever I tried to go to a subgenre page. It was random which subgenres would cause the freeze though. I did the usual “rename the Roon folder to Roon-old” and reinstalled Roon on my iMac. Trashed the “Roon-old” folder and that solved the issue for now. I noticed this has happened after each new version has been released. I always have to do a fresh install on my iMac for it to work properly. Not a huge deal, but it sucks having to redo all my settings each time

Animal, May I call you “Animal”?

Thank you for your assistance. I think I have done that, twice. Only difference is that I swept the Roon folder to the trash bin and took out the trash before I reinstalled the software. Should the order matter?

Sub voce, Do you suspect Valence, as I do? I fear she can no longer be trusted. Once she finds my phone, I’ll have no choice but to listen to the music she chooses.

Does Valence (or “Roon”) reside anywhere on my hard drive outside of the Roon application folder? In other words, if I want to completely exorcise her from my hard drive before the reinstall, are there other steps I must take? I checked with Mrs. InVinoVeritasty, and she assures me we have plenty of garlic and a small cross. We are prepared for battle if that is what it takes!

Will it work? In 2001, A Space Odyssey, Bowman shuts down HAL by removing modules from service one by one; as he did so, HAL’s consciousness degraded. HAL finally reverted to material that was programmed into him early in his memory, including announcing the date he became operational as 12 January 1992. I would like to try the same with Valence. Any help would be appreciated.

Hey,
Yes, “Animal” is fine. I do not think order should matter since the same thing is accomplished in the end, which is starting from scratch. The whole making an “Old-Roon” folder first is simply a backup.

I am not completely sure, but I don’t think valence resides on any of the Roon remotes. I think it mostly resides on Roon’s servers and is integrated into the Roon OS on your nucleus. I suspect this because it is only the desktop software that seems to be stopping you from listening to the obscure Irish composer, so I think the garlic and small crosses can be put down and you are safe…for now…

I also don’t think that Valence can be separated out and removed on its own since it is integrated into pretty much all areas of Roon. I think issues has to do with the MacOS app specifically and has to do with rendering images sometimes. Roon seems to have problems with the high resolution retina displays.

Whenever I come across something I can’t get to work properly, I first try hitting it with my drumstick. I start out with a few light hits and then wait a little bit to give it time to respond. If that does not work I will beat it into submission with some heavy drum sticks. I think you could beat Valence into submission. When that doesn’t work, I give the item to the Cookie Monster and have him eat it. Then I just Rock on and usually forget about what I was trying to do

Julian, Thanks. I can’t seem to fix it. I hope to hear from @support soon. This is the only app I am having trouble with.

Thank you Animal. I pray this nightmare ends soon. We will keep our powder dry until we hear from support.

Guys,
sorry you are having problems, these posts have brightened my day…
Julian.

Julian, I don’t know if this battle can be won, so my advice is to never anger Valence. She can be a cruel mistress. Mrs. InVinoVeritasty and I have sufficient water and wine for two weeks until support arrives. Wish us godspeed.

Update. Turning off the Nucleus and restarting it was of no avail. I let it discharge every musical electron before rebooting. The app searched for Roon core while the Nucleus restarted, but then, it connected back to the very same screen (now absent the zone and instead, taunting “Select an audio zone” which, of course, I can not do). Our daughter, Decibelle, fears Valence has blocked our messages to Support. While I assured her Valence has no such powers, privately, I worry as the hours pass with no response.

Update: Five hours and no sign yet of Support. That’s ok because no doubt Valence is up to other mischief elsewhere that must be crushed. Defeat is not an option.

Mrs. InVinoVeritasty, daughter Decibelle, and young Timbre remain resolute; in fact, young Timbre has reminded us all that “It is not in our power to anticipate our destiny.” Winston Churchill, 1932. So true! Like Churchill’s Operation Dynamo, “We shall fight on the beaches” – and in our listening rooms!

We have Victory! We have defeated the demon!

How to uninstall Roon completely..DB or something appears broken Support

Am told I don’t have access to that page Where can i get full instructions on a complete uninstall from iMac running el capitan?

Congratulations to you and your troop of soldiers in your victory! You have won the battle and shall live to see another day! Thank you for sharing your tactics. I am sure they will lead many others to victory as well. Since my battle last night all has been well on the northern front but I remain vigilant and have placed Ms. Piggy, Kermit, and Elmo on 24/7 perimeter surveillance. I am sure you messages have been received by support but their responses are few and far between as they are weary from numerous fortnights of continuous battles.