Playback on iOS - no longer a thing?

Hi everyone! When we sat down to plan this release, we only had a few short months before Christmas. We knew we wanted to deliver something really great to everyone – not just to finish the year in style, but also to show our gratitude to everyone who helped make 2017 the best year yet for Roon Labs. But what do you get for the music lover who has nearly everything? And with so much planned for 2018, where to begin? If you think it’s tough trying to pick out gifts for your family, imagine tryi…

In version 1.4, it was a big reveal that you could stream to iOS devices.

I’ve installed the latest version (1.6) to my iPhone and all I can seem to do is play to zones? Has this been removed? Or is it hiding somewhere?

Looks like playback to iOS does not work from RoonServer but works from Roon Core running on macOS? How do I get this working with Linux as my server?

I can playback on/to my iPad.
Cannot help with iPhone.
Dirk

I believe that iOS playback zones are automatically set to be Private Zones when first enabled. That means playback can only be initiated to that zone from the device itself. You can check by opening the device setup (gear icon) in Settings—>Audio for your iOS device. 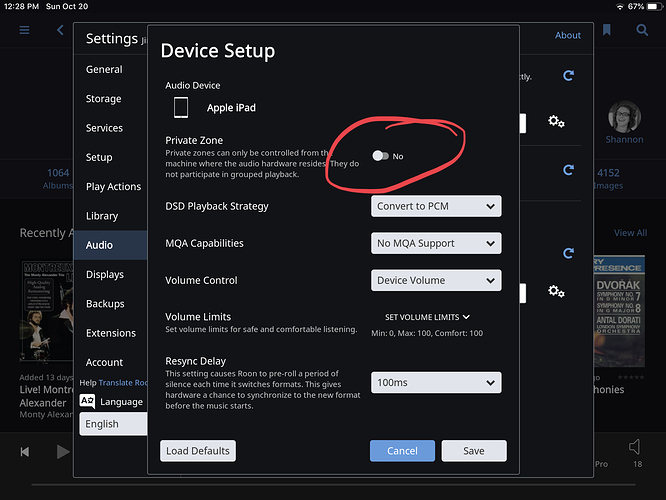 This option does not display for me.

Are you running it off a Linux server?

I use a Nucleus.
I can play on both iPads and iPhone.

The private zone thing means that if you want to play on an iPad or iPhone, you need to select that output zone on the same iPad or iPhone.
If you turn off Private, you can play on that device from another device, not that I have ever wanted to do that. I make them private to reduce clutter of zones.

Okay, could someone set up a VM and confirm that this issue exists with Linux server version?

That’s clearly not the case if I was able to direct connect by providing the static IP of the server that was on a separate subnet? It’s just Roon is incapable of auto-scanning any subnet other than the one that your device’s network interface is connected to currently.

From Why can’t Roon Remote Connect?:

If your Roon Core is still on a different network it won’t work.

Roon uses different network protocols for the UI and the audio streaming. Just because you were able to connect the UI to the Core doesn’t mean that the streaming part works.

There is no issue with the Linux server version. Many users run their Roon cores on Linux servers. Roonlabs provides the ROCK OS which is Linux based and sells Nucleus and Nucleus+ appliances which are also Linux based.

I’ll give it another shot today or tomorrow.

I do have another question though, maybe a little off-topic. If I go through all of my music categorization and cataloguing and make it exactly how I’d like… and then I use Tidal on the go, none of that synced right? So your whole music library is locked to streaming at home unless you set up a VPN?

Roon does not sync anything back to TIDAL or Qobuz.

Because some of the underlying protocols of Roon are non-routable, Roon only works in it’s local network by design. The use of a VPN is a non-supported use case. You can find discussions about VPN over in the #tinkering section of the forum.

But there’s also this:

It would be great to be able to take the music away with us, via sync or via streaming, directly to mobile devices. Space is not an issue for us lucky Android users whom have Micro SD card capability and for the rest, there’s always streaming. I have a great little 24 bit DAC in my Sony Z5 that sounds quite good for a mobile. I came to Roon, specifically because Plex does not have 24 bit sync support and each time I raise it, they get all confused about what it is ultimately saying they alrea…

But there is no time schedule for when that will happen.