Description Of Issue
Switched from earlier model Taiko Server to the “Extreme” model. While doing so, my Roon Playlist vanished. Library is intact.

When you switched your watched folders in Roon, did you edit the existing folders or did you add new ones?

Can you share a screenshot of Settings > Library > Clean Up Library? Note that you don’t need to actually run this process, we just need to see the numbers showing here.

And again, the Library looks normal-- it is just the Playlist which has vanished. 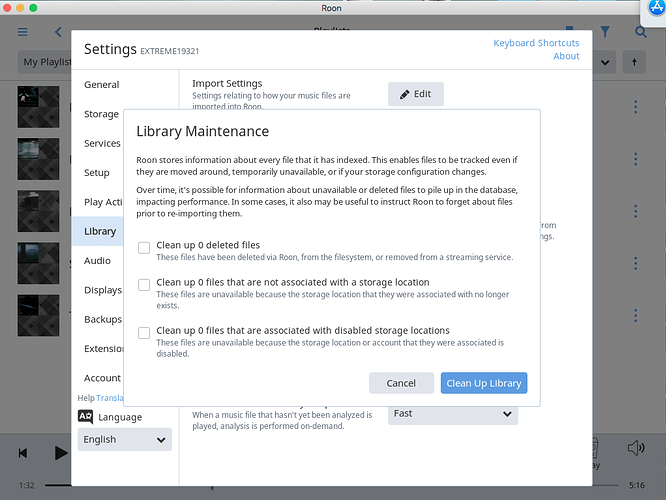 Can you confirm that you followed the migration instructions outlined here?

My playlist was supposedly on auto backup, so I presumed it was backed up and would automatically migrate to the new core.

I’m wondering why the playlist did not migrate, but the library did. Is the playlist on a different migration path?

Just to verify, you did have a Roon backup that you restored on the new Core machine?

These were playlists that you created in Roon? Or were the m3u files in the storage location?

I don’t know where the Playlists were backup up exactly. I think on the old server drive.

The setup of the new server was done by the developer of the new server (who has done this many time without losing playlists from Roon), so I can only assume that he would have followed the right protocol not to lose my playlists.

Btw, this happened to me before (lost all playlists)-- I don’t recall the exact circumstance.

But again, my Roon Playlist was on Auto Backup.

Shouldn’t there be some kind of prompted migration process when switching cores?

And again, please explain why my Library is intact with the switch but the Playlists are vanished (apparently)? Are they saved differently?

If a playlist was made in Roon, the playlist will be in your Roon backup. If the migration process is followed and the backup is restored, those playlists should migrate over through the backup.

And again, please explain why my Library is intact

Can you confirm that your play counts and history from before the migration are also present on the new Core machine?

But again, my Roon Playlist was on Auto Backup.

Shouldn’t there be some kind of prompted migration process when switching cores?

When you switch to a new Core, you can restore a backup if you’ve made them previously, but this isn’t automatic. If you have a backup available from before the migration, you can restore that and you should see your playlists. You can read more about backups and the restoring process in our KB.

History only goes back to time of Core change

I’ll read the restore section when I have a chance. Thanks

But what about my question of the Library migrating intact but not the Playlists?

Your library looks like it has been rebuilt from your files on the new server that is why you have no playlists or history. I would contact the person who did the work and ask why they didn’t do a backup and restore.

As Ged suggested, this is most likely because your library was re-imported fresh rather than migrated properly as outlined in the migration guide linked above. You’ll want to restore a Roon backup and follow the instructions listed there to make sure that everything is properly brought over to the new Core.

A post was split to a new topic: Lost all playlists and favorites