Iain is correct, and we had thought to have had the cast update out by now, but a niggling glitch with the Android app has stalled the process a bit. That done, and 1.52 out, we will be able to submit what we hope will be the final firmware to Roon for swift certification. That said, I can’t predict when that will take place, as we use to refer to the pandemic surprise setbacks as the four horsed of the apocalypse, but are now up to about fourteen horses. Wish us luck!

It’s important for manufacturers to ‘get this right’.

I would not have bought two NP5’s unless they were certified/Roon-Ready.

Being Roon-Ready is an important function, and selling point. Couple that with (I’m pretty sure?) the vast majority of Roon users spending more on hardware than other listeners, and you have a recipe for success for hardware manufacturers.

I just wish manufacturers would invest the proper time, energy and resources into getting this done properly. It’s just frankly embarrassing for a manufacturer to promise certification to customers, and then not deliver.

Throughout this week we will be releasing both firmware and Prisma application updates, detailed below, noting that with these updates the foundation is in place to add gapless Tidal Master file and full resolution Qobuz 24/192 kHz playback, along with Roon Ready certification for all Primare models throughout the summer in order to have full Prisma network playback by this autumn.

Prisma Radio
The key feature of the new Prisma application update is the addition of embedded internet radio. We have added this internet radio feature to make listening to old and finding new favourite stations easy and intuitive from the thousands available worldwide.

The future
Further enhanced features and stations will be added to Prisma Radio as they become available.

Common to both Android and iOS/iPadOS operating systems:

Please contact us should you have any questions. Tack! Team Primare

Any news regarding this?

No! Everyone has fallen asleep!
My understanding is that one should select Chromecast as the Roon endpoint. This is said to be virtually indistinguishable from Roon Ready playback. The only limitation will be 24/96 kHz maximum resolution. If and when Roon Ready is released this will get bumped up to 24/192 kHz.

„Primare is pleased to announce that I15 Prisma (both original and MK2 versions), I25 Prisma, and I35 Prisma integrated amplifiers have received Roon Ready certification from Roon Labs, with an automatic update being launched throughout the day today, Monday, 23 January.“

Can I hope that P35 will follow hot on the heels?

@GARETH_CRANSTON
It looks like it because on January 23rd, 2023 Primare wrote: 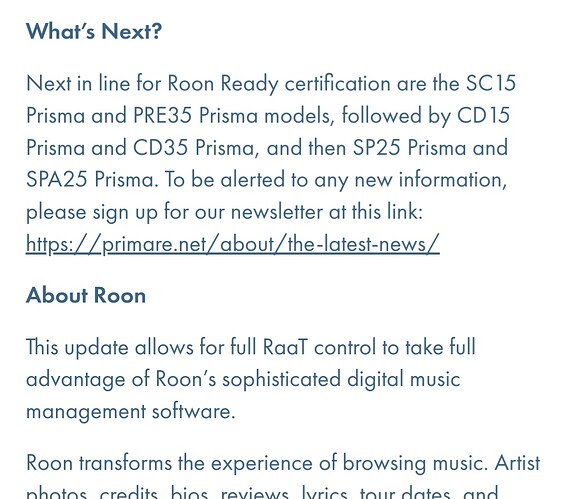