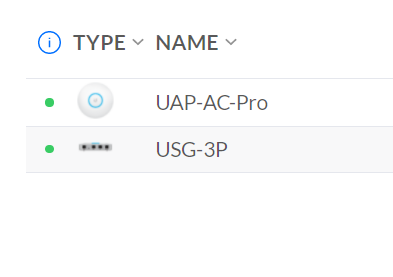 ifi xDsd to my lenovo i7 16gb, but the exact same problem was happening yesterday via the bluesound node 2i

I see 100mbps + on all connected devices, why won’t 192 work and now I’m having the same issue at 96? last screenshot is now looking like the first two even though it’s 96. BTW, yesterday I had zero issues with 192 MQA on the same album in the first screenshot. What can I do to get Qobuz to work too?

96 - worked on some tracks, but then skipped some too.

So the 145 Mbps is the core. That does not seem right. When trying to play Quobuz 192 why would Roon try and download 145 Mbps at once? This seems like a bug. When looking at MQA or in general I’ve never seen this over 20 Mbps. 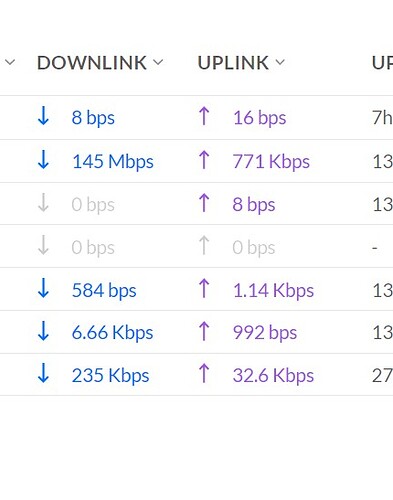 I take it back on the amount download bandwidth seen, I just had a hiccup on the Blakey album via 192 MQA and now see this. So why does Roon try and download so much all at once and not download piecemeal over time? 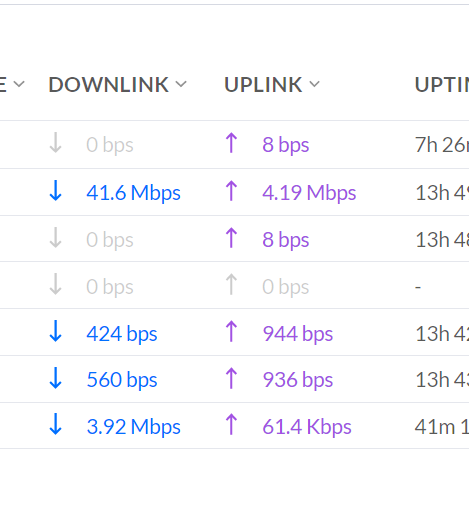 BTW, this seems odd too because I was having no issues playing 192 previously to yesterday. Let me know if you have any suggestions.

If you are using Roon Core over wifi this could be the issue. Roon recommends running a Core device on LAN connection only. You might also make sure no VPN is in use and that your core machine is using DNS like 1.1.1.1 or 8.8.8.8 instead of ISP defaults

But that doesn’t explain why Roon is downloading 145 Mbps at once which is likely the cause of the issue. Right? I’m only getting just over 100 Mbps. Streaming 4k video doesn’t require that, and why would a file of that size need to be downloaded all at once for Roon to function? Seems like something is off in how streaming audio should work here. Like I said things were working great until recently running large hi res files. Did something change where Roon is downloading an excessive amount at once causing this issue? Were those sizes downloaded previously but somehow my network had no issues?

if you are using wifi…all bets are off for interference etc and wifi is not a full duplex infrastructure.

Roon is a heavy network application and its not just pulling the track you are playing either.

I am not official support so just trying to give you some things to expand on here.

What additional information could I provide? There is the unifi gateway with AP and everything is connected via wifi. And I don’t understand how that relates to my question about how downloading 145 Mbps at once seems odd. I don’t know. Do you when you say all bets are off? Does that mean the large amount downloaded at once to the core is not related because I use wifi?

plug your core in via Lan and see if this helps… if you can’t do that then I cant offer you much else other than what I have suggested already. Otherwise wait for support to get your issue in their queue.

What additional information could I provide? There is the unifi gateway with AP and everything is connected via wifi. And I don’t understand how that relates to my question about how downloading 145 Mbps at once seems odd. I don’t know. Do you when you say all bets are off? Does that mean the large amount downloaded at once to the core is not related because I use wifi?

Not Roon support either, but I’ve looked into this at some point. Here’s the logic:

TL; DR Do not have your core and your endpoints fighting for the same limited network resource.

Your AC pro has a secondary Ethernet port you can connect to if you don’t have a switch…but I dont know how you have it installed. but q cheap switch would not be more than maybe $25-$30 to try it with, and return if its no help

Thanks for providing some ideas, and I do have it set up so the core sits on a separate wifi network from the endpoints, and perhaps there could be some modifications made to make it more ideal. But can you both answer my questions and see if I’m off base here?

Exact same problem and not sure why it’s a feature request and not a bug considering my 2 questions above.

Perhaps @noris can help who made the initial recommendations to me for my current network set up.

Maybe I don’t understand what’s happening here and there is solution that works for wifi since I don’t have the ability now to go wired to my core.

If I only have over a 100 Mbps, then won’t the core trying to download up to 145 Mbps at one time cause an issue especially if I can see it all happening at once as pointed out in the screenshot?

It won’t if the core is wired, as I explained earlier. The problem you are having is WiFi congestion, not congestion on your internet connection.

Since I was able to play hi res 192 files fine previously doesn’t that pre-suppose that something changed with Roon (maybe the recent update)? Or was there some way my network was able to handle the large file downloads previously and now it can’t?

WiFi congestion depends on everything else going in the WiFi radio environment, both in your own WiFi networks and your neighbors. It could just be that someone nearby started using a lot more bandwidth because of a change in their hardware (happened to me a while ago).

I have a UniFi network at my shore place. I’ve not used this, but it’s possible to restrict specific subnets or devices with bandwidth profiles. Can you experiment with limiting your core that way?

I appreciate the comments and I still don’t understand how the issue is not perceived as one Roon should attempt to resolve. The very long “feature request” post is one example, and a more glaring one is why can people stream 4k video with no issues but Roon can’t handle a 192 hi res file.

The only advantage of wired I believe you are saying is that I would be giving Roon access to the ability to draw down much higher bandwidth. But that still doesn’t address my points that downloading such a large burst at once is really the crux of the problem and one Roon should fix. Right? All suggestions given so far have not addressed this glaring issue of what is really the need for Roon to max out bandwidth and why could it not be done more slowly.

I don’t understand why “the all bets are off” attitude persists with wifi. Another point is that there are a group of audiophiles who believe wifi is better than wired because it doesn’t introduce line noise. I know nothing about all this and I just want Roon to work at 192 like it did last week!

While I appreciate the ideas and feedback, I do think one issue with the Roon community forum here is that there is a lot of noise in the system because of certain beliefs. This fact is evident in that my specific question about isn’t the issue that Roon asked for 145 Mbps and I only have around 100 Mbps the problem? As the screenshot above shows I was actually able to get 145 Mbps but that’s also when Roon crapped out. And if this is all the real problem, then my only solution is for Roon to not do that or get whatever maximum bandwidth Roon requires? I don’t see Roon listing anywhere what the maximum bandwidth required is to play hi res 192 files.

also when Roon crapped out

That is a symptom!
Fix the problem ….

I have 50Mbps VDSL, run my core wired and the bridges wireless on 5GHz with Qobuz 192kHz and have not a single problem, while other household members are video conferencing wireless and another watching 4k Netflix wireless.

As I started with Roon 1 3/4 years ago, I had skipping with 44.1kHz due to running the core wireless, even with no other network usage in the household.

My point remains about how weird this forum is in that not a single person has addressed my question about the 145 Mbps being downloaded all at once and why that is not seen as the issue here. This strange need to be helpful but not really helpful is what I would call noise in the system. Pun fully intended considering my other comment about noise in the wire.

I have observed spikes in network traffic when starting a new track, although this never has impacted playback performance or sound quality.
The picture shows a spike to 80Mbps at the start of a track, but this does not impact network, audio or video performance in any way. 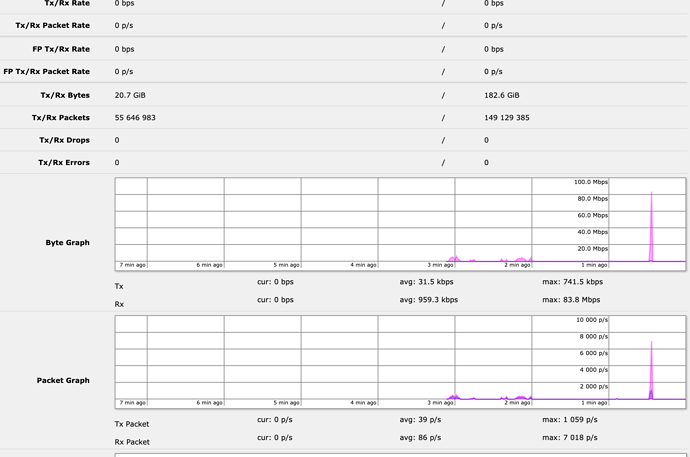 This is an actual screenshot taken while writing this post and having listened to music all evening (without even a blink).

FYI:
My network is based around Mikrotik routers and Cisco switches using VLANs.
Where the router is connected to a fiber 1GB uplink are all AV nodes connected with Gigabit Ethernet, the odd wifi connected device not taking into account.

I looked at my setup (all wired) and yes every time Roon begins to load a new track at a very high download rate for few seconds, appears to be a buffer function and it does not affect my system one bit. Just for fun I ran three 192 QB tracks to three separate zones and no problem either, just network traffic from the NUC to endpoint and from my router to the NUC tripled.