Qobuz Albums gone after B401

Just did the update and 80% of the Qobuz albums that I added to my library are missing. Now I’m suppose to spend hours adding them back … thanks roon. I think I’ll just give quit Qobuz instead and stick with the files I own as those never disappear.

Hi Len-ski. I moved your post into a Support thread so this can be investigated. Can you describe your setup and give examples of Albums that disappeared ?

I appreciate your quick response but I’m just to upset right now to deal with this, maybe some other time.

Hey @Len-ski – sorry for the trouble here. Let’s take a look at this so we can make sure we understand the issue.

Have you checked they are still favorited in Qobuz app? I had issue with with previous version. I signed out of Qobuz on roon and signed back in. It then synced them all back up.

I have had exactly the same thing happen. Maybe 200-300 albums. I cannot remember exactly. I have been adding a lot as my main system is out of action and will take a while to rebuild.

The problem is that it is difficult to remember. But I almost immediately noticed that the Alison Krauss + Union Staition “So Long So Wrong” album was missing because I posted it on What are you Listening To 2019". It got several hearts so maybe others are having the same experience.

I also added a whole bunch of Delius albums and they are all gone as well. I have a horrible feeling that the pattern is where I made a lot of edits. In the first screenshot, only one Delius album has been retained (Delius Edition). The metadata on that album wasn’t great either (no Delius credit) and now because the other albums I added are gone, many compositions have now reverted to being unidentified on the one surviving album.

On the first screen I added several (not all) but definitely more than the Delius Edition. It is difficult to remember these things. On the second screen shot I distinctly remember adding the Barbirolli and the Du Pre as they are some of my most favorite albums. 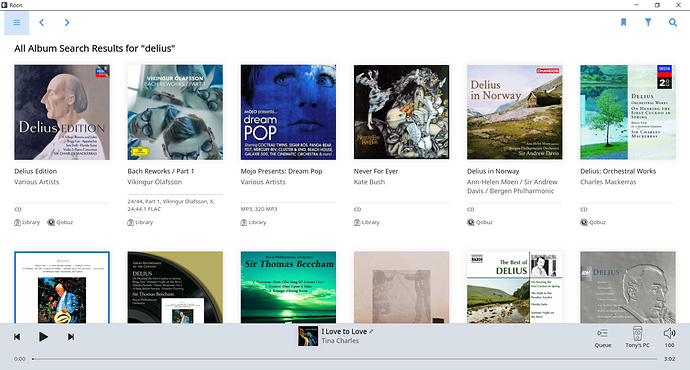 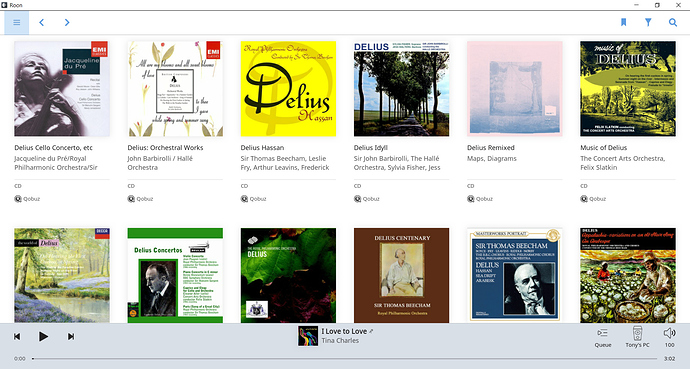 Following up on @Mike_Scheinkman’s comment. I can confirm that the missing albums are in both my Qobuz favorites on roon and the Qobuz app. In all cases as far as I can see these were albums where I did sometimes quite significant edits in roon. I have been finding Qobuz metadata very hit-and-miss and that has been reflected in the amount of editing. In many cases composers are missing from Qobuz metadata and also work titles making adding the files in roon pretty pointless without the edits.

I just checked the Qobuz app on my iPad and all my favorites are there, just most are not in my roon library. I tried disabling Qobuz then restarting it in roon but there was no change.

Mike I just tried going into Qobuz in roon from the pull down menu in left corner and going into my Qobuz favorites from there and all my favorites are there. Weird. Also tried actually logging out of Qobuz in roon then logging back in instead of just disabling it. Then I hit the sync library tab. Nothing worked.

I can replicate all these steps. Exactly the same experience.

When I go to Settings - Library - Clean up Library and under top choose it says “ clean up 2628 deleted files” and I know that was zero just two days ago so that has to be the number of missing Qobuz files.

I’d suggest not accepting the clean up yet Len-ski. These reports are being investigated and the Roon staff will be reporting back here with news as soon as they have something to tell us.

I have not done the clean up as I’m hoping to recover the files.

My album counter has suddenly gone up by 250+ which I am obviously very pleased about. I assume these are most of the missing Qobuz albums. I don’t know if synchronization is normally a lengthy process like this (12 hours or so), or if something else has been done in the background to address the issue by roon/qobuz.

I still have 29 deleted files that are waiting cleanup. I don’t believe these were deleted by me but are probably the remaining missing Qobuz albums.

We have been working with Qobuz to look into issues with syncing, and have been addressing some syncing issues on an automated account-by-account basis.

So it’s possible your accounts had this syncing problem which should now be resolved. If anyone is still seeing issues with missing albums please let us know!

@dylan - I’ve added 35 (streaming) Qobuz albums to my Roon library since February 16. At various times over the past week, when I’ve started up Roon, 5 or 6 of these have vanished (but are still favorited in Qobuz app). When I added them back in within Roon, they show up anew with their original added dates and my Roon tags intact. Today, however, when I started Roon up all 35 albums show up (with tags, etc.) but with today’s date (February 21) as the “added” date! Is this the consequence of Qobuz’s process? Thanks-Bill

That’s certainly my understanding and it has also happened to me today.

@dylan I have just noticed (only updated earlier today to latest update) my library is no longer in date added order as per Qobuz, lots of albums’s have ‘new’ added to them when I added them to Roon a week or more ago when I started my subscription. I have carefully counted my Qobuz favourites (in the Roon Qobuz area) and I have 321, yet when I focus my library to a location of Qobuz I only have 312… I would love my albums back in the date added order as per Qobuz as I find this very useful (and if that could apply to albums imported into Roon when I first started my subscription that would be terrific) in other words could Roon go by the Qobuz date added stamp? As for the missing 12 albums - who knows what they were? Again I have edited Qobuz albums extensively as their metadata often can’t be picked up by Roon so needs amending for composer and genre quite often.

I was hoping that Roon will really encourage me to trust a digital library that syncs with an online streaming service, Qobuz being like any other in randomly removing albums that they no longer stream or have changed licensing - its a real pain - I had hoped Roon would help deal with this problem and even keep my library safe even of I moved streaming service… surely that would be the aim for the future.

I’m glad to hear that Qobuz content is properly syncing for you all.

We are working with Qobuz to investigate the incorrect import dates that are appearing in Roon for some Qobuz content. We will be sure to update you here as soon as more information is available. We appreciate your continued patience and feedback while we get things corrected.